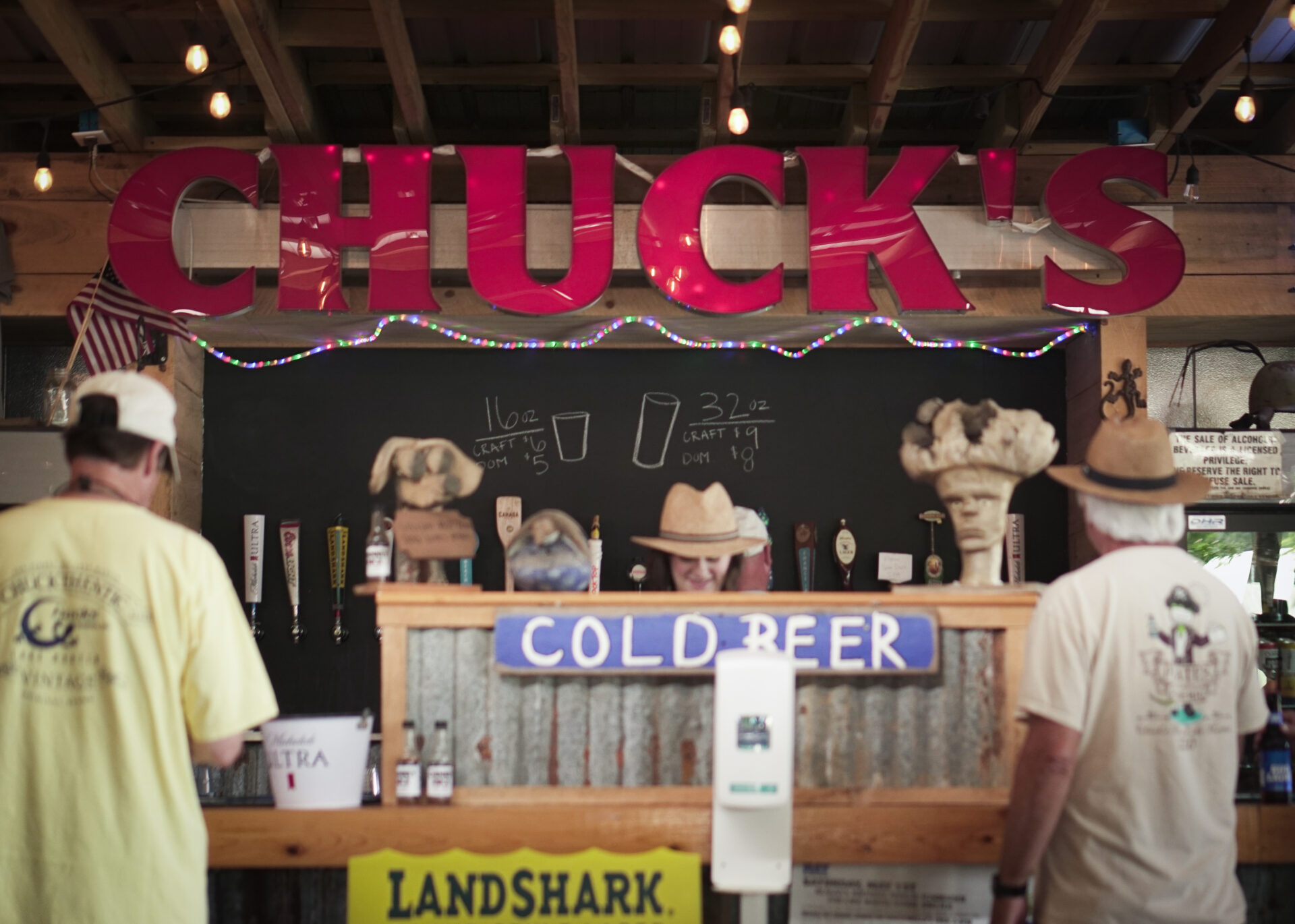 When you’re out for a day on Lake Martin, you are sure to hear about Chuck’s Marina.  Sure-it is a stop along the way to fuel up the boat, but it’s also one of our favorite places to fuel up ourselves too-as they are home to some of the best pizza and wings you will find on the lake.  There’s so much more to this special spot though.  We will fill you in on some of the interesting info about this hotspot on Lake Martin, but make sure you put this on your list to visit while you are here.   You can boat up or drive up….. some have even been known to come by seaplane. However you get here though, you will be so excited to have found this little piece of tropical paradise at Lake Martin! 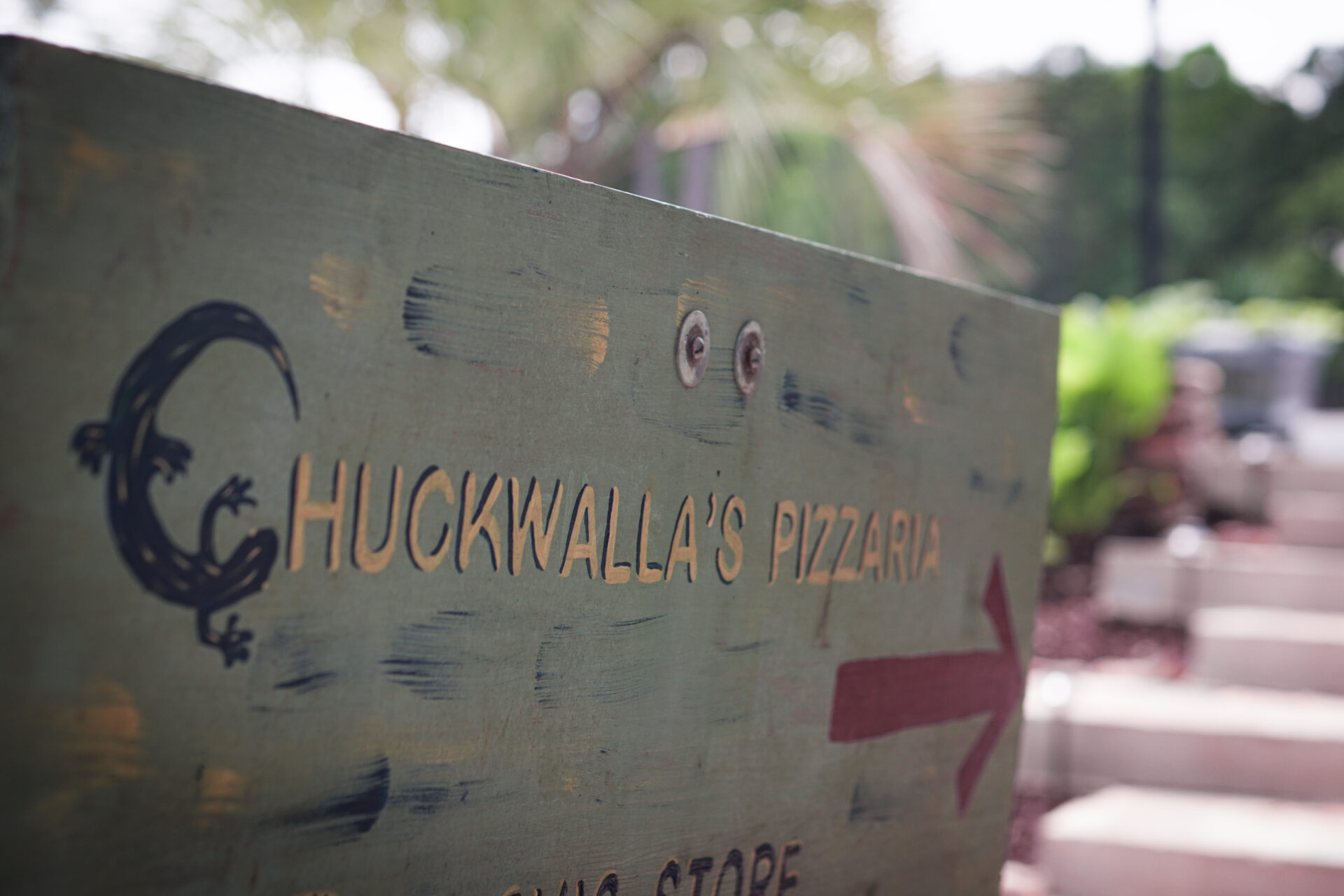 This beautiful spot on the lake that is now home to one of our most popular hangouts, has actually been around quite some time.  In 1961, J.W. Thompson opened Thompson’s, and rented fishing boats and sold gas from the marina.  He also built cabins that he rented out, and sold candy and ice cream out of a house he had on the property.

The 1970’s brought a new owner and a new name to the marina when Chuck Williams and his wife bought the place.  They decided it was the perfect place for a ski shop.  Their store sold ski equipment and gas, and they also operated a real estate office out of the building where the wine bar, WineStoppers, is now housed.

Chuck Williams sold it to the Hayes family in the early 80’s, but Mr. Hayes unfortunately passed away shortly after, and Chuck took back over the land before selling it to Russell Lands.

In 1993, Greg Harris bought the property, and he and his wife, Jane, still own and operate it.  When Greg first bought Chuck’s Marina, everyone told him he should sell BBQ, but Greg felt passionate about sticking to his idea of pizza (and we are so glad he did!) The new pizza spot, Chuckwalla’s Pizza, was built in 2016.  Greg and Jane have owned Chuck’s since, and have turned it into one of the most popular hangout spots on Lake Martin.

Chuckwalla’s is well known around town for their pizza.  Everyone has their favorite, but I am more of a veggie lover, and I personally suggest the Chuckwalla special.  This delicious treat is topped with sun dried tomatoes, spinach, feta, onions, and mushrooms.

However, Jane will tell you her favorite is the Acapulco Rock.  This one is definitely for the meat lovers, and includes pepperoni, Italian sausage, ground beef, onion, green peppers and mushrooms.

She says the top seller though is the Chimney Rock, which is another that will make any carnivore smile from ear to ear.  This one can best be described as a supreme pizza, and is loaded up with pepperoni, Italian sausage, ground beef, Canadian and smoked bacon, black and green olives, green peppers, onion, and mushrooms.  Basically-a little of everything they can find in their kitchen!

You truly can’t go wrong with any of their pizzas, but they are also known for their wings and sandwiches.  As far as wings go, the most popular are the raspberry chipotle, but Jane says her fave would be the lemon pepper.  If you are in the mood for a sandwich, the Muffuletta is a big hit, and has ham, pepperoni, salami, provolone cheese, and an olive salad.  The Toasty Roasty is a local favorite as well though-this is their version of a roast beef.

The Story Behind Chuckwalla-Their Special Mascot 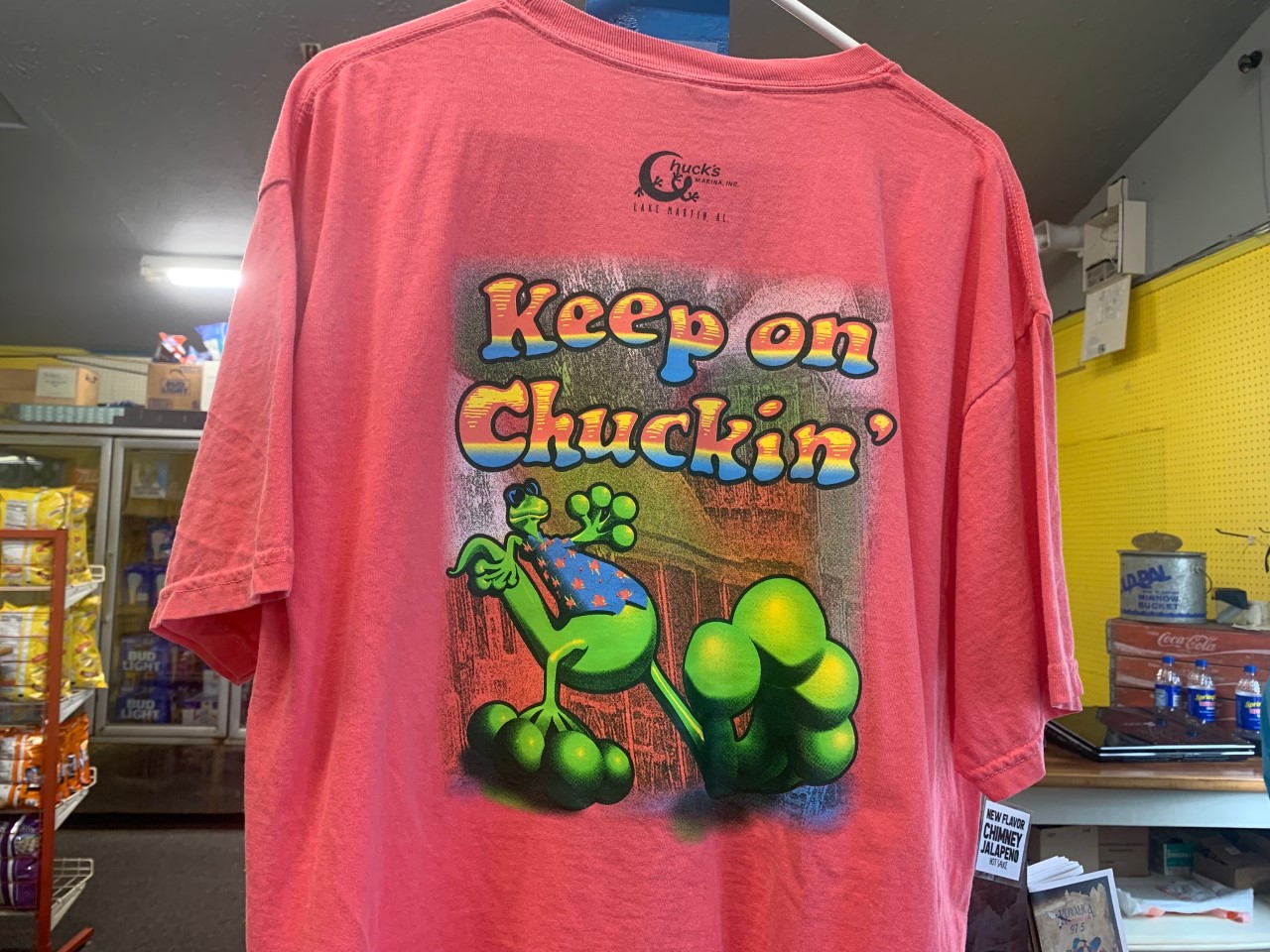 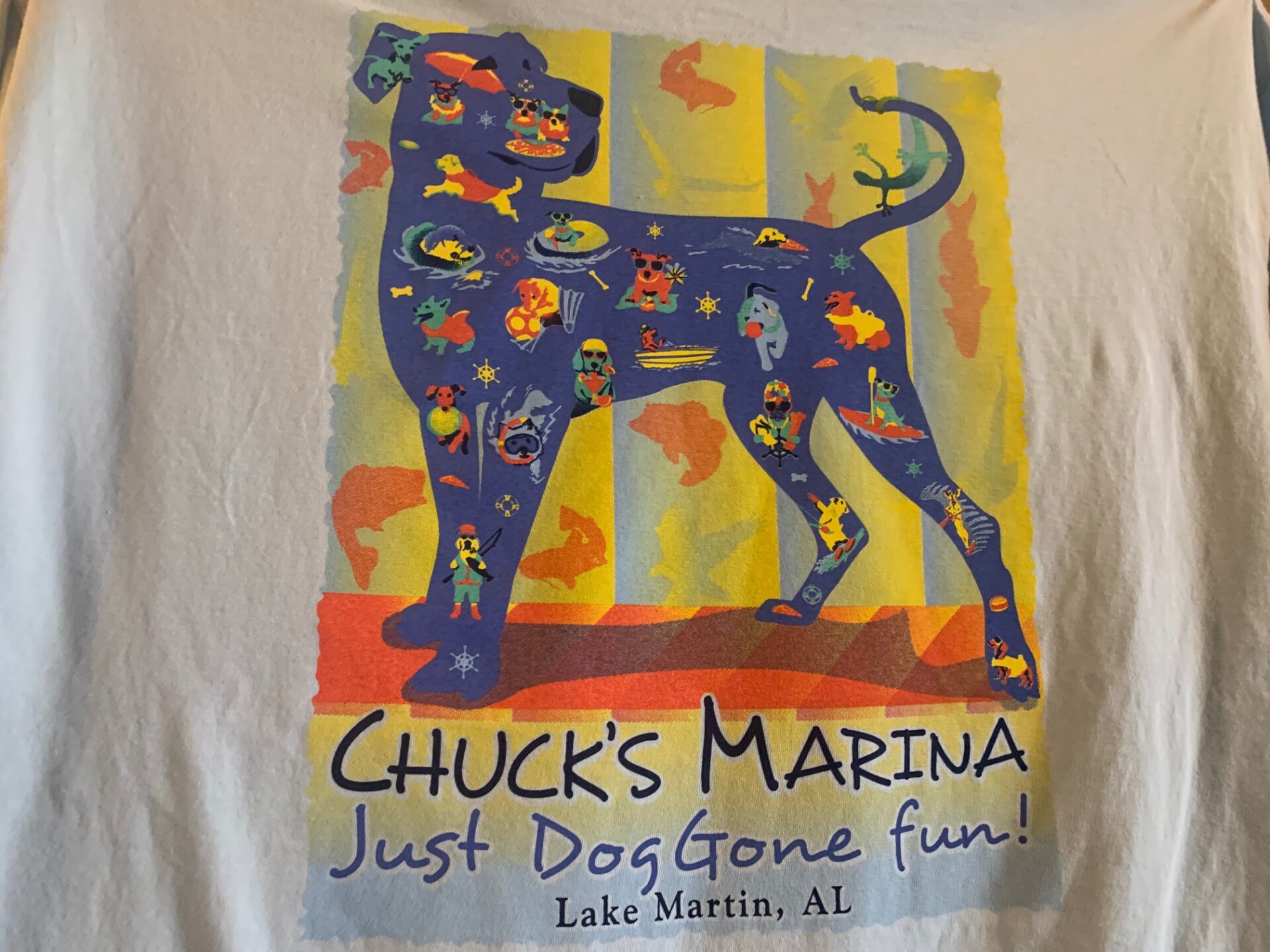 In 2004, a new green face joined the Chuck’s family.  That is when the namesake of Chuckwalla’s Pizza became their official mascot.  A Chuckwalla is a lizard that is native to Arizona, but is also found in some coastal islands.  Chuck’s offers up an island vibe with their beautiful landscaping, laid back culture, and al fresco dining, so it seemed fitting that the Chuckwalla lizard would make the perfect face of the brand.

Chuckwalla has since been incorportated into their logo, and into their famous, collectible t shirts.  Each year, Jane thinks up at least 3 new designs, and the locals are quick to come out and scoop them up to add to their summer wardrobe.  Some would say a Chuck’s t shirt is part of the official uniform of summer around Lake Martin.  One of the three shirts always has a dog included on it-they are big animal lovers at Chuck’s!  The second is a 4th of July shirt, and the third always has a fun, different theme.  I am totally in love with this year’s funky themed shirt that they call-Keep on Chuckin’.

Chuck’s is your place to jam out every Thursday and Saturday night.  On Thursdays, the live music cranks up about 6 and lasts until 9.  Saturdays you can catch some of your favorite local bands performing 7-10.  You can keep up with all of the updates on their live music schedule on their Facebook page.

Giving Back To The Community

The owners, Greg, and Jane, are big stewards of the community and believe in giving back.  One ongoing effort during the summer is their monthly wine tastings.  These ticketed events happen the 3rd Saturday of each month, and serve as assistance to a variety of worthy causes, such as the Lake Martin Animal Shelter, the Dadeville Public Library, and the Tallapoosa Girls Ranch.   They have also previously hosted fun charity events like rubber duck races!

Our Tips If You Visit Chuck’s

Chuck’s is one of our favorite spots on the lake, and we think you will enjoy it too! Have a great time, and Keep on Chuckin’!