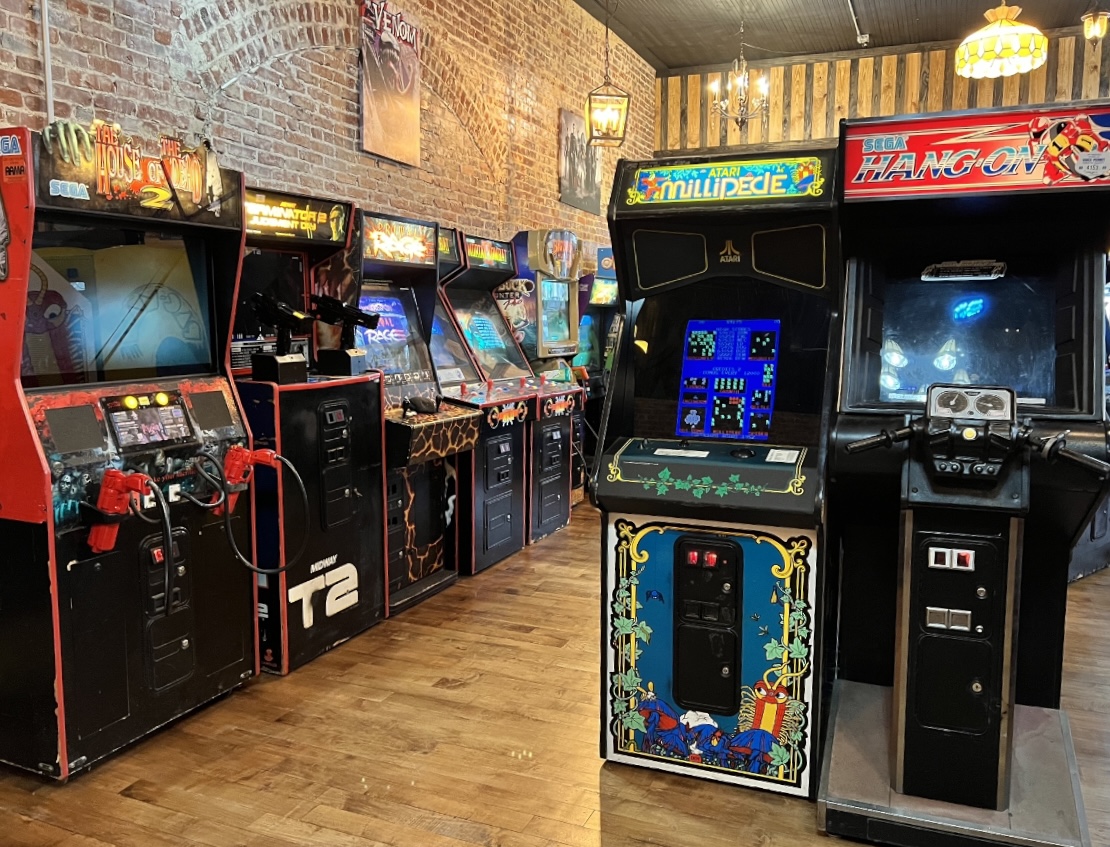 Respawn Arcade is one of the newest entertainment venues in the Lake Martin area! From the moment guests walk through the doors they are dazzled with flashing lights, rows of arcade machines, and classic theme songs that tap right into your childhood nostalgia.

With a vibrant atmosphere and thousands of games to play, it’s a haven for family fun and hours of entertainment. 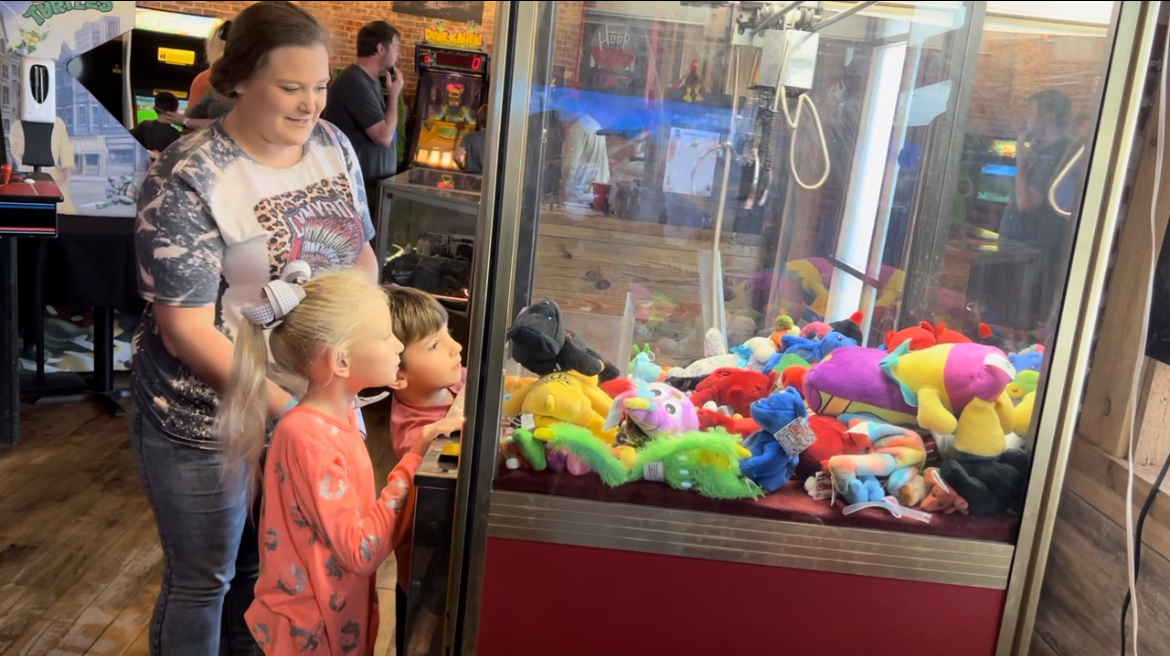 Respawn Arcade all started with one machine and a lifetime passion for games. Owners James and Jessica Duncan both grew up frequenting arcades throughout their childhoods, making them lifelong enthusiasts of the gaming world.  However, their experience as collectors began about 10 years ago when James found a Mortal Kombat arcade machine for sale online.  Though it wasn’t in perfect working order,  James found a way to restore the arcade game back into great condition.  Ever since then, the couple has become hooked on collecting arcades.

For years afterward, James and Jessica continued their hunt for the next great arcade game, filling their basement with machines for friends and family to enjoy.  They had always dreamed of one day opening an arcade of their own and finally, after years of searching for the right spot, they found a home for their collection in Alexander City.

After nearly a year of hard work and personal renovations to the building, Respawn Aracde officially opened its doors in September 2022. 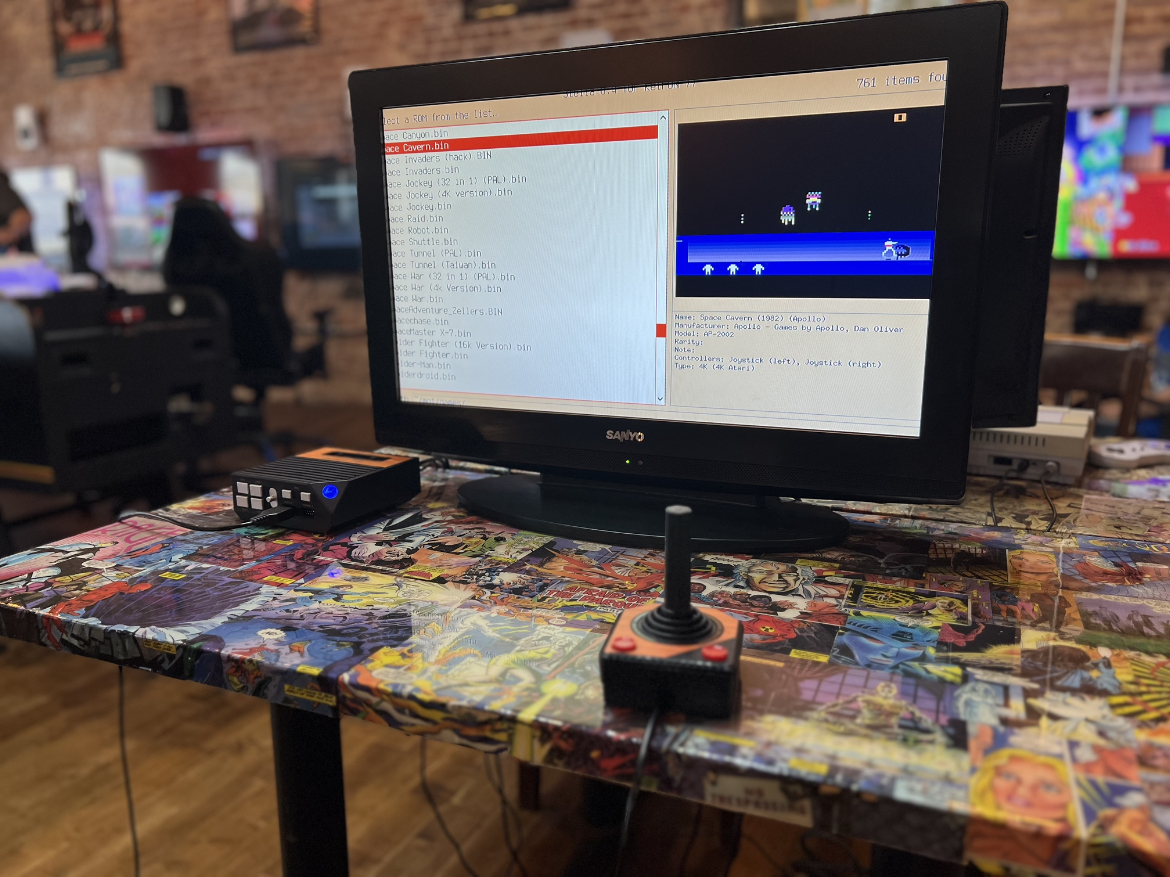 Part of being a collector means you don’t always find arcade games in mint condition. In fact, many of the games that James and Jessica find need parts replaced, updated, or even fully rebuilt.  In these instances, the couple works with students attending Southern Union Community College in the technology department to help with some of these repairs.  And the students love the opportunity!  It’s a chance to work on a “puzzle” and see how they can improve on the mechanics of the games.  Often times their ideas come out better than the original design!

There’s A Game For Everyone At Respawn- Literally 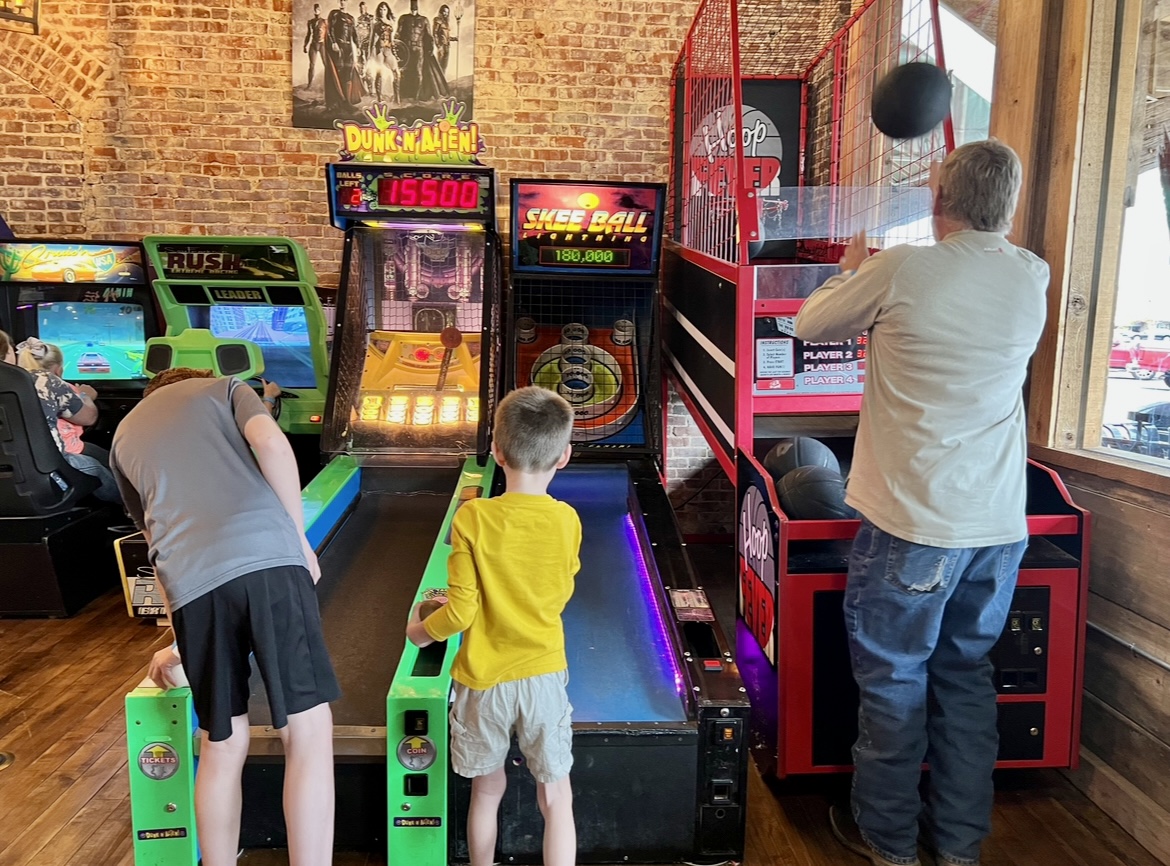 With thousands of games ranging from 80’s classics to just recently released, there is quite literally a game for everyone to play.  James and Jessica have seamlessly combined the new-age virtual gaming world with old-school consoles, such as Pac-Man and Atari.

Some of the fan favorites include air hockey, skee ball, and “Hoop Fever,” a basketball tossing game that we all know and love.

Here is a break down of what you will find at Respawn Arcade: 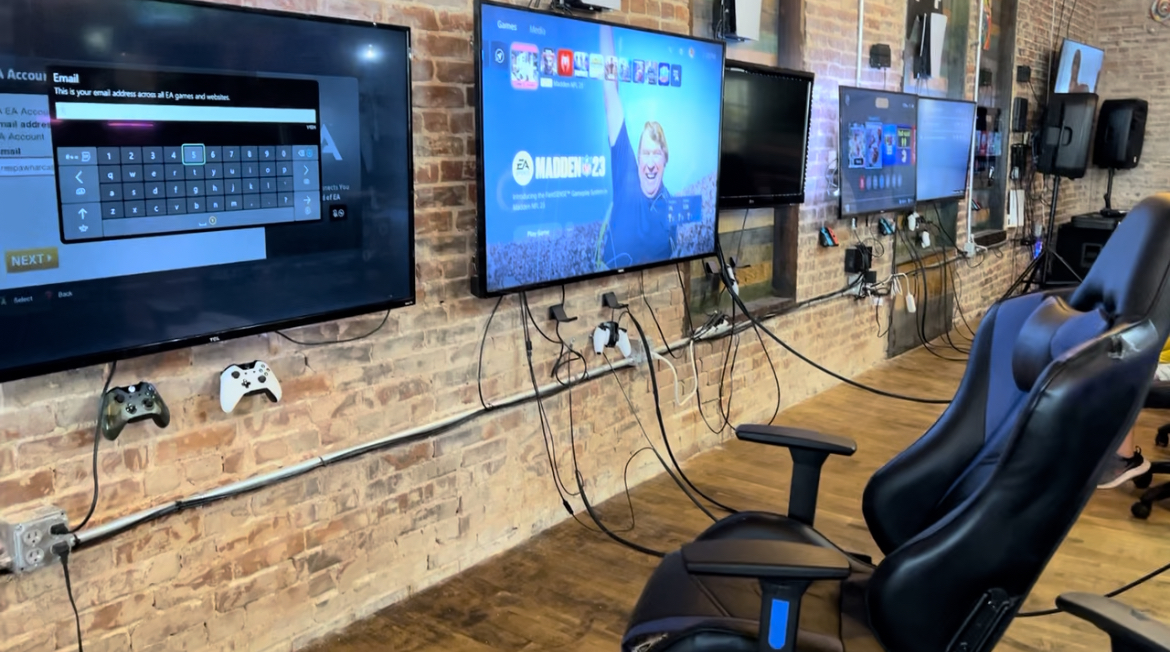 This area of the arcade is home to the most current-generation gaming consoles in the gaming world today.  “The Wall” is lined with flat-screen TVs, lavish gaming chairs, and hundreds of the newest releases. In fact, all of the consoles have subscriptions as well as the ability to download or cloud-play any game.  Players can enjoy any one of the Nintendo Switches, Wii, Playstation 5, Xbox Series S, or Xbox Series X. 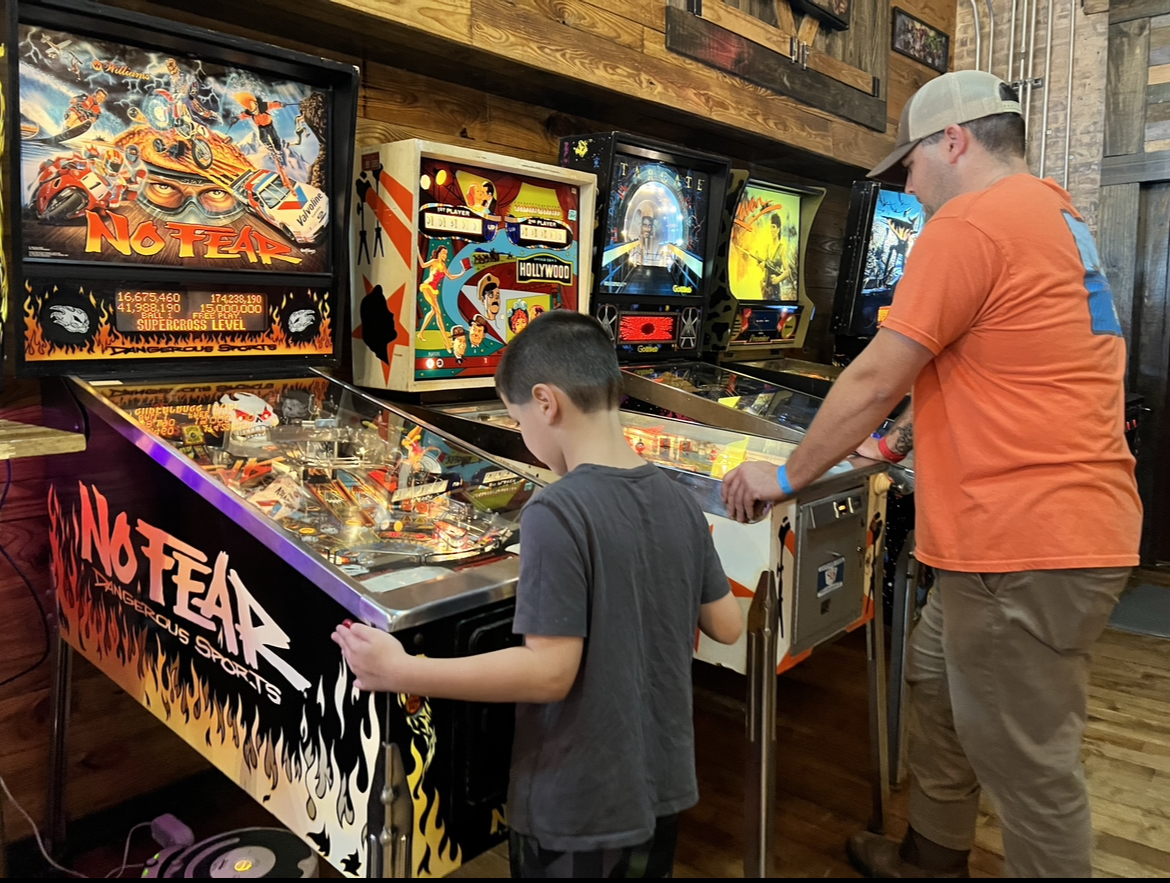 Your visit isn’t complete without stopping by “Pinball Alley.”  Respawn Arcade has a row of several vintage pinball machines, and many of their names may sound familiar. That’s because often times pinball games are based off of plotlines to famous movies, and points are earned by following the storyline. At Respawn Arcade, you may find yourself in the middle of an intense pinball battle from the hit films “Stargate” or “Starship Troopers!” 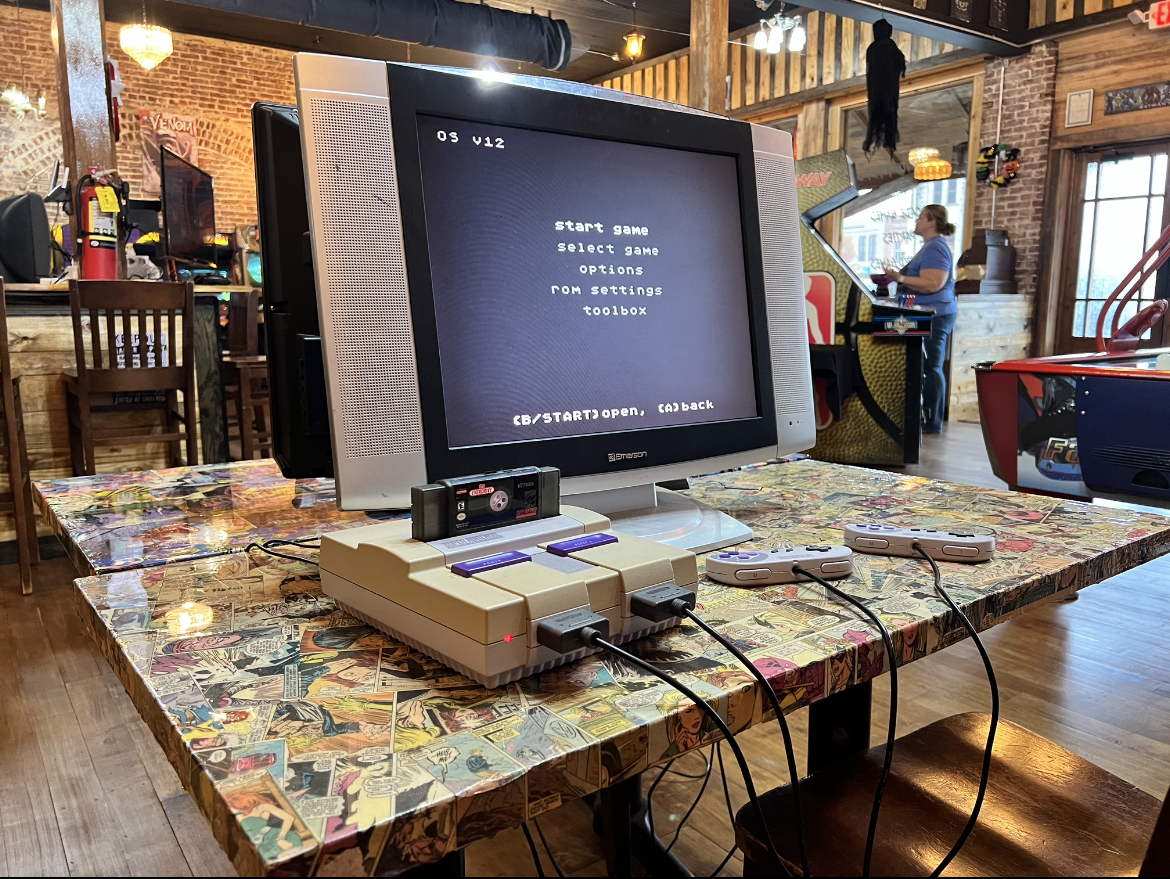 One of the biggest goals for James and Jessica is to have representation of all the major vintage console systems at their arcade, giving guests the opportunity to tap into their childhood and play games they may not have been able to enjoy in a long time.

Sitting at smaller tables are several consoles on display, each one programmed with a different vintage gaming system as well as hundreds of games. From Sega to Super Nintendo, and of course Atari, each one has the ability to play any game ever built into the system.  Of course, should you find there is a game missing, the couple has over 3,000 old-school video games that they are more than happy to bring in for you to enjoy. 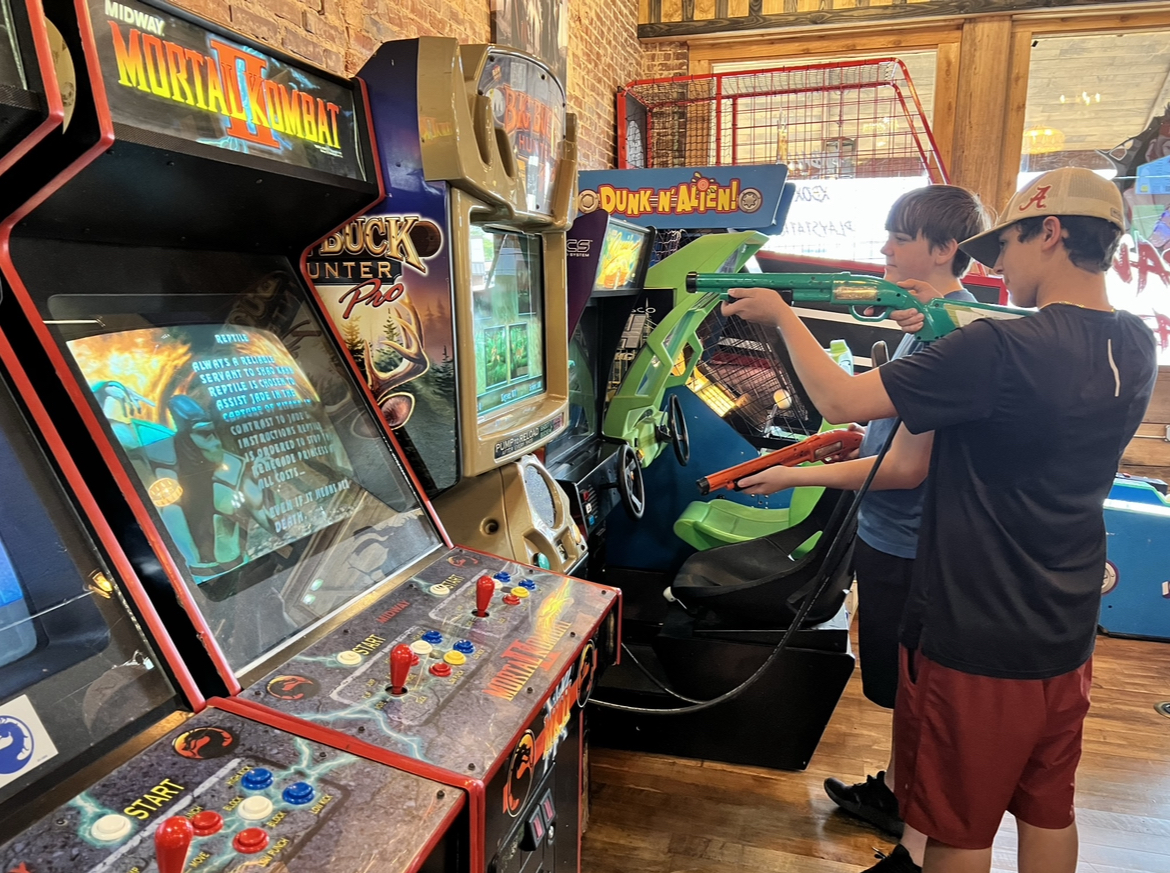 There is an entire section of arcade games to explore! From Cruisin’ USA, to Buck Hunter, and even old school Pac-Man, it’s hard not to hop from game to game to try them all. The best part is, all of these games are also set to “free play” mode, so no worries about having to pop quarters in to keep your game going.  You have unlimited play time, so go hit that high score! 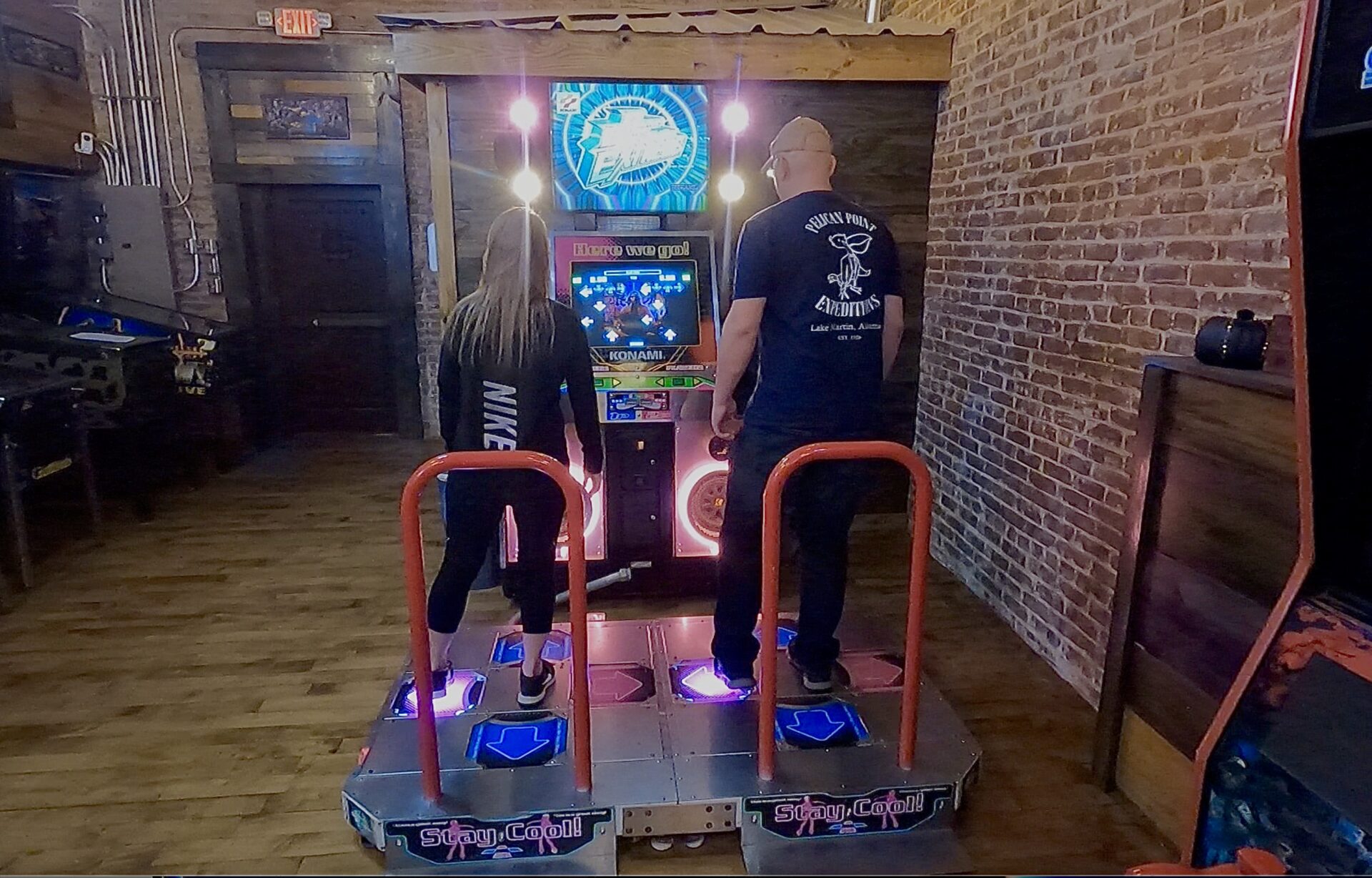 Respawn Arcade is also home to three of what I like to call “larger than life” games.  This includes Rock Band, Virtual Reality, and Dance Dance Revolution.

“Rock Band” at Respawn Arcade has an extravagant setup, including a pro electric drumset, microphones, and a real lead guitar, replacing the classic plastic one we all may remember playing.  And to top it off, everything is displayed on a 75” TV with surround sound speakers and rotating party lights.  You definitely feel like a real rock star playing on this set!

Guests can also find themselves in a virtual reality game. In this area, a barricade is set up for the player to keep them – and the viewers – safe while playing as these games are in full motion!  While the player has their Oculus goggles on and is interacting in the virtual reality world, the game itself is cast and live-streamed on a TV monitor, so viewers can see all the action too!

And finally, we have Dance Dance Revolution. “DDR” is so rare, players have been known to drive hours to find a real setup – and we have one right here in Alexander City!  Though it can be challenging, it is thoroughly entertaining to watch both beginners and experts alike dance their way through the game.

“Free Play” For All 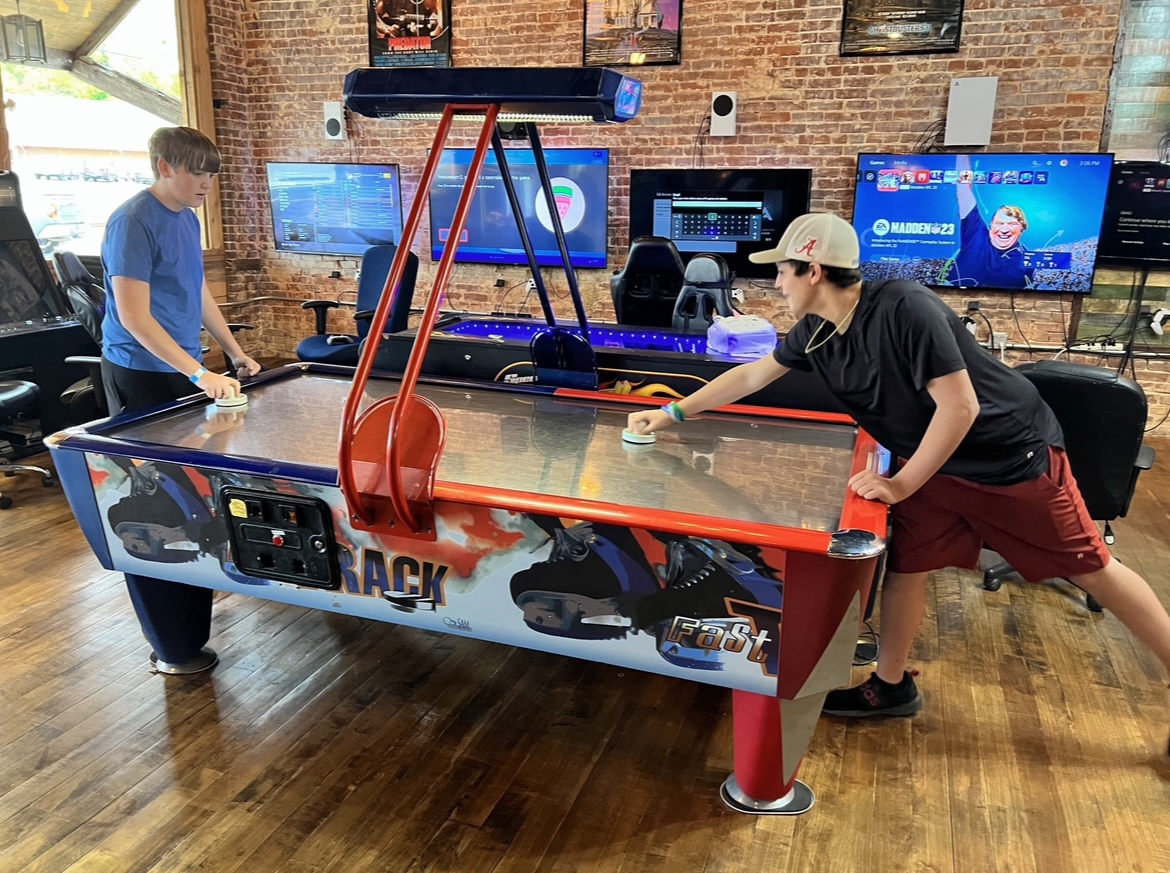 When it comes to cost, James and Jessica wanted to focus on having a place where guests can come and have a whole day of fun, and not break the bank.

Every game in Respawn Arcade is set to “free play,” so there is no need to bring in quarters and keep feeding the machines.  You simply pay at the door for a wristband and the full arcade is yours to play with unlimited gametime.  Guests also have the option to leave the arcade and come back later that same day, without the hassle of repaying.

The arcade is also available for rent for birthday parties of all ages.

Respawn Arcade is open Wednesday through Sunday every week.  Adult wristbands are $16.50 and children 11 years and under are $8.75.

The Future Of Respawn Arcade 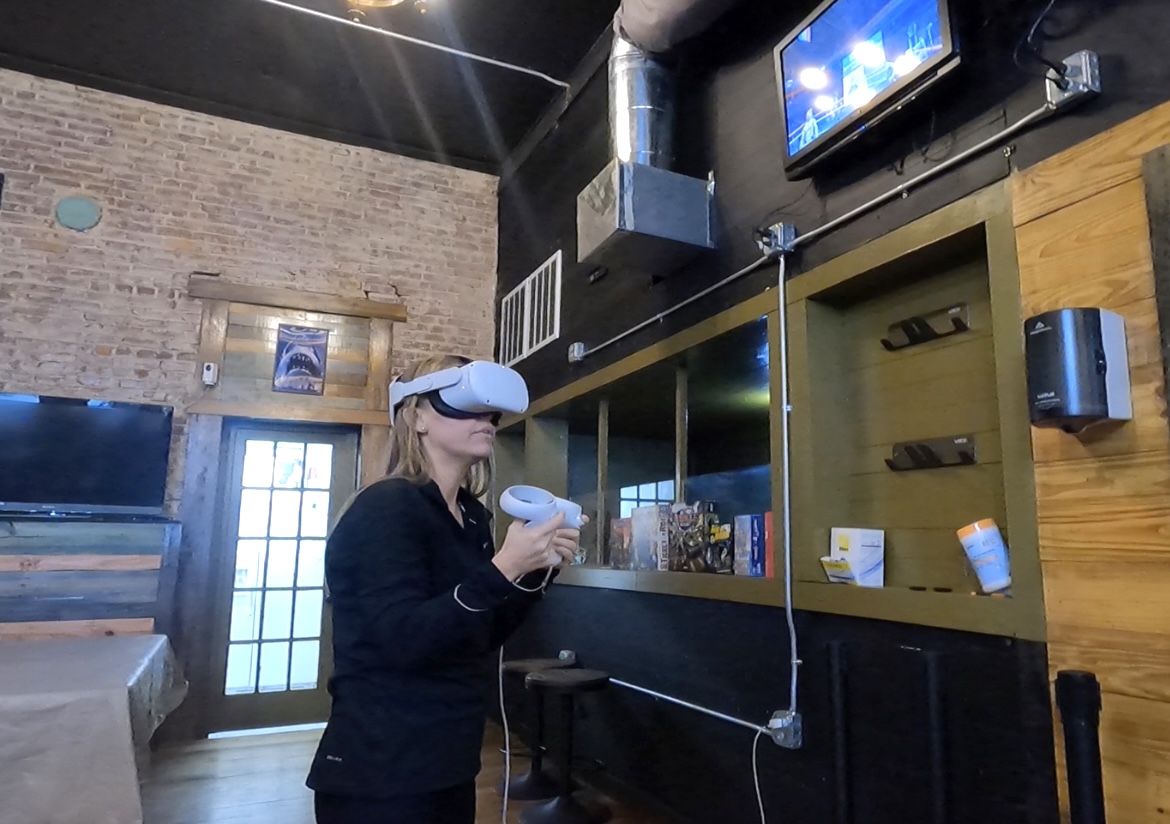 James and Jessica have built every gamer’s dream arcade  – and they aren’t finished yet. The couple looks to continue to expand, with lazer tag, cornhole, and even a downstairs for card games and board games.

Respawn Arcade is such a cool and unique addition to the Lake Martin community.  James and Jessica are incredibly knowledgeable, energetic, and hospitable to every guest that walks through the doors. I can’t think of a more fun way to spend your day in Alexander City than at Respawn Arcade!

How To Get To Respawn Arcade:

They are located in Downtown Alexander City, where there are so many fun things to do!