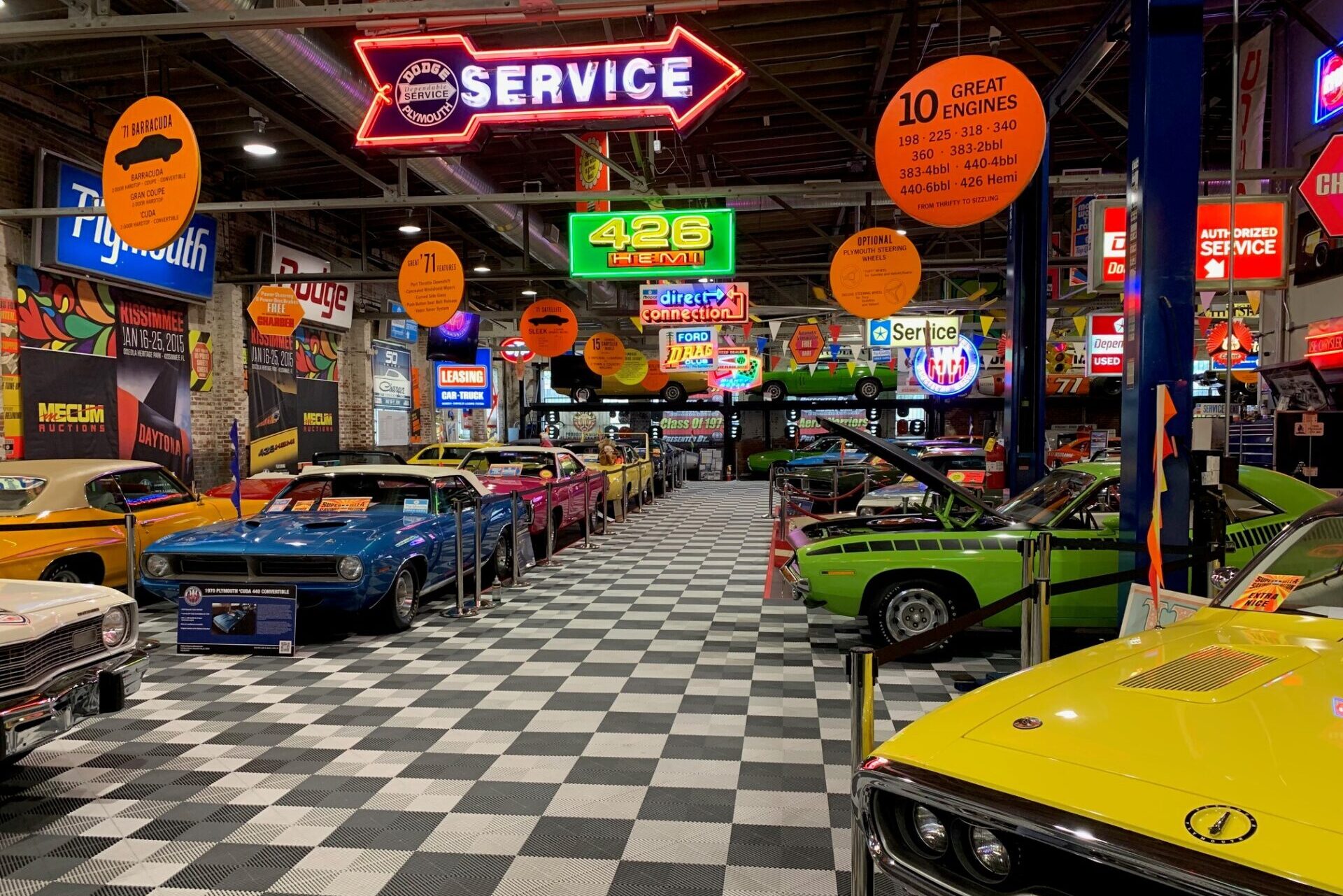 Located near the heart of Downtown Alexander City is the largest muscle car museum in the world. Here, visitors can take a step back into the 1970’s and walk amongst some of the most iconic and rare American muscle cars ever made. 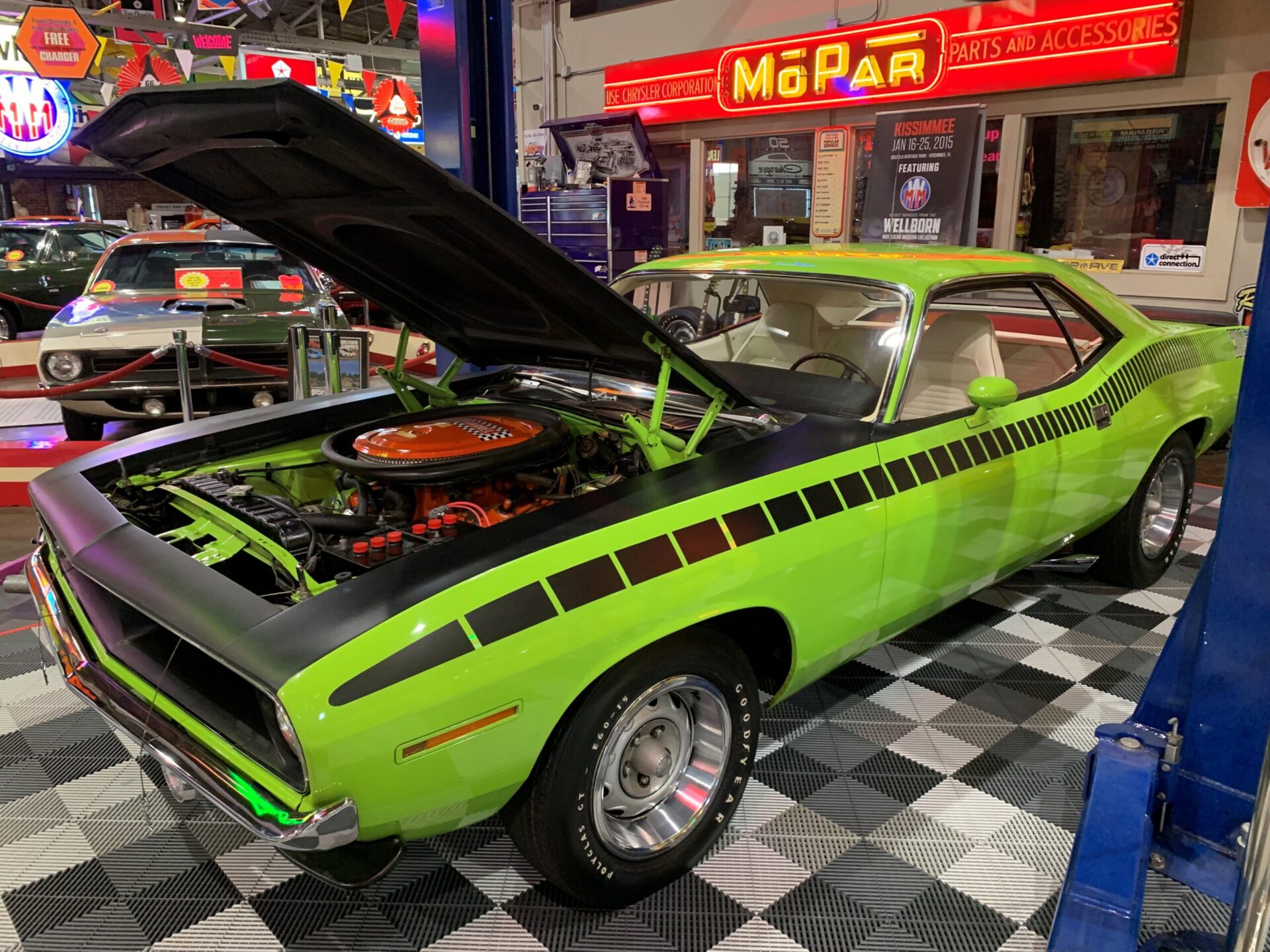 Opening in 2010, the Wellborn Musclecar Museum is a place for preserving and promoting the American muscle car culture. It focuses particularly on muscle cars from the 1969 – 1971 era and is home to some of the rarest muscle cars in the world.

The museum is a bright and electrifying atmosphere, with black and white checkered floors, neon lights, and authentic signage décor, giving visitors the feeling of walking back into time to a 1970’s car dealership.  This is fitting as the building itself is actually an old Chevrolet dealership – and exactly the place you would have come to buy these cars back in the day.

Owners Tim and Pam Wellborn have worked hard over the years to build the Wellborn name.  From memorabilia displays, to the muscle cars themselves, their precision and passion ensure that all the cars and culture are preserved down to the exact detail. All of the cars in the collection are in excellent running condition and are frequently fired up for a quick spin around the block.

No matter if you are a first-time guest or long-time collector, this museum is fun and fascinating for everyone to visit.  It is very guest friendly, with displays near each car filled with detailed information on that automobile as well as the unique story of how the car came to be in the museum.

The museum is open to the public on Saturdays.  Private tours are available Tuesday through Friday by appointment only.  Small and large groups are welcome.

How It All Started 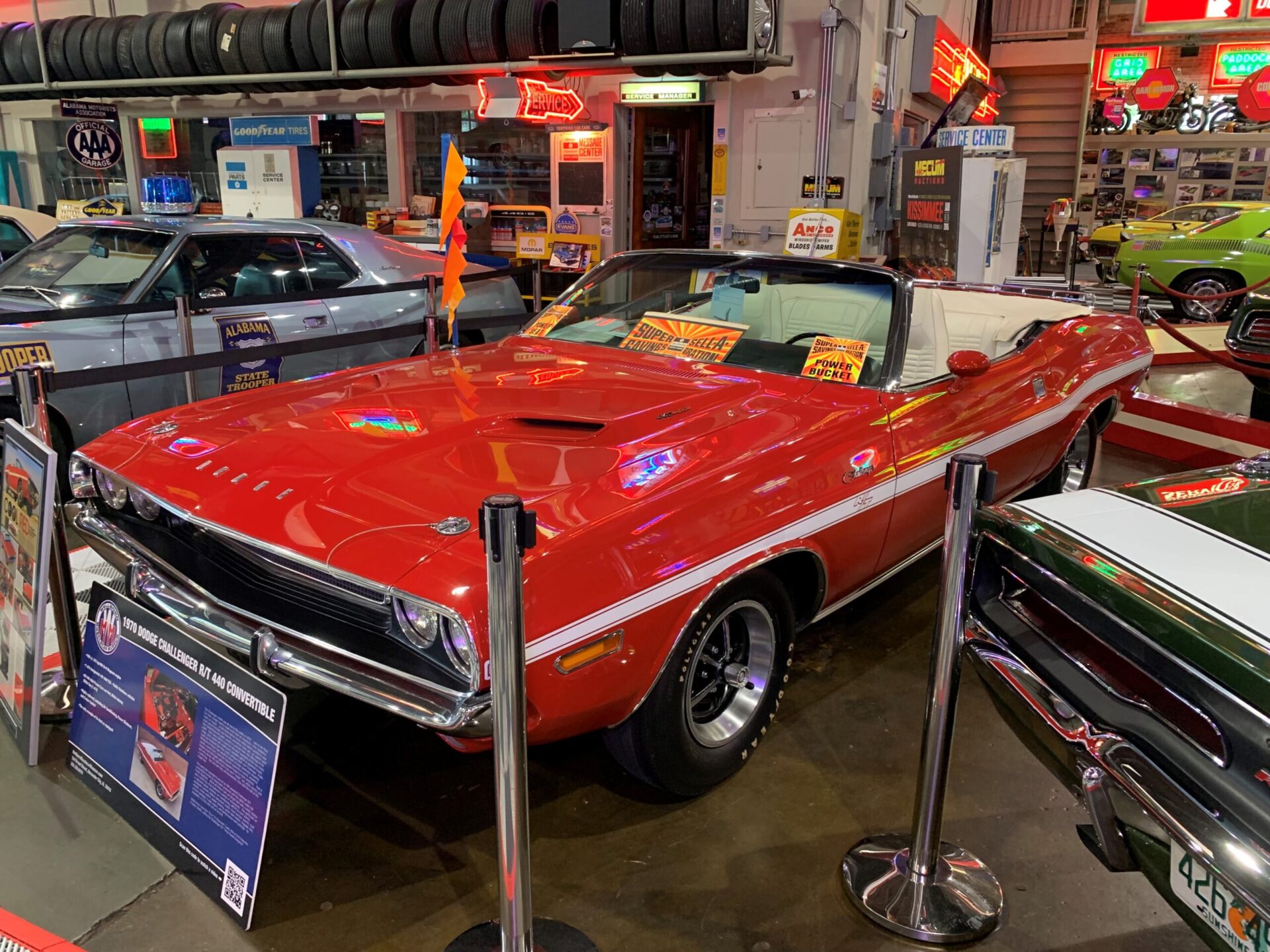 Owners Tim and Pam Wellborn have been muscle car collectors since their early teenage years. The pair collaborated together to build their museum into one of the most creative and diverse displays in the world.

The current building of the Wellborn Car Museum is a piece of history in itself.  It was an old 1940’s Chevrolet dealership that was slated to be torn down by the city. When Tim learned of this, he decided to buy the building and use it originally as a storage location for cabinets with his dad. It wasn’t until later that his collection was outgrowing his garage that they came up with the idea to start the Wellborn Musclecar Museum.

However, there is one car in particular that is credited to starting the museum, long before the building was even purchased. It was the car that sparked Tim’s passion for muscle cars and is famously known as “Dad’s Car”. 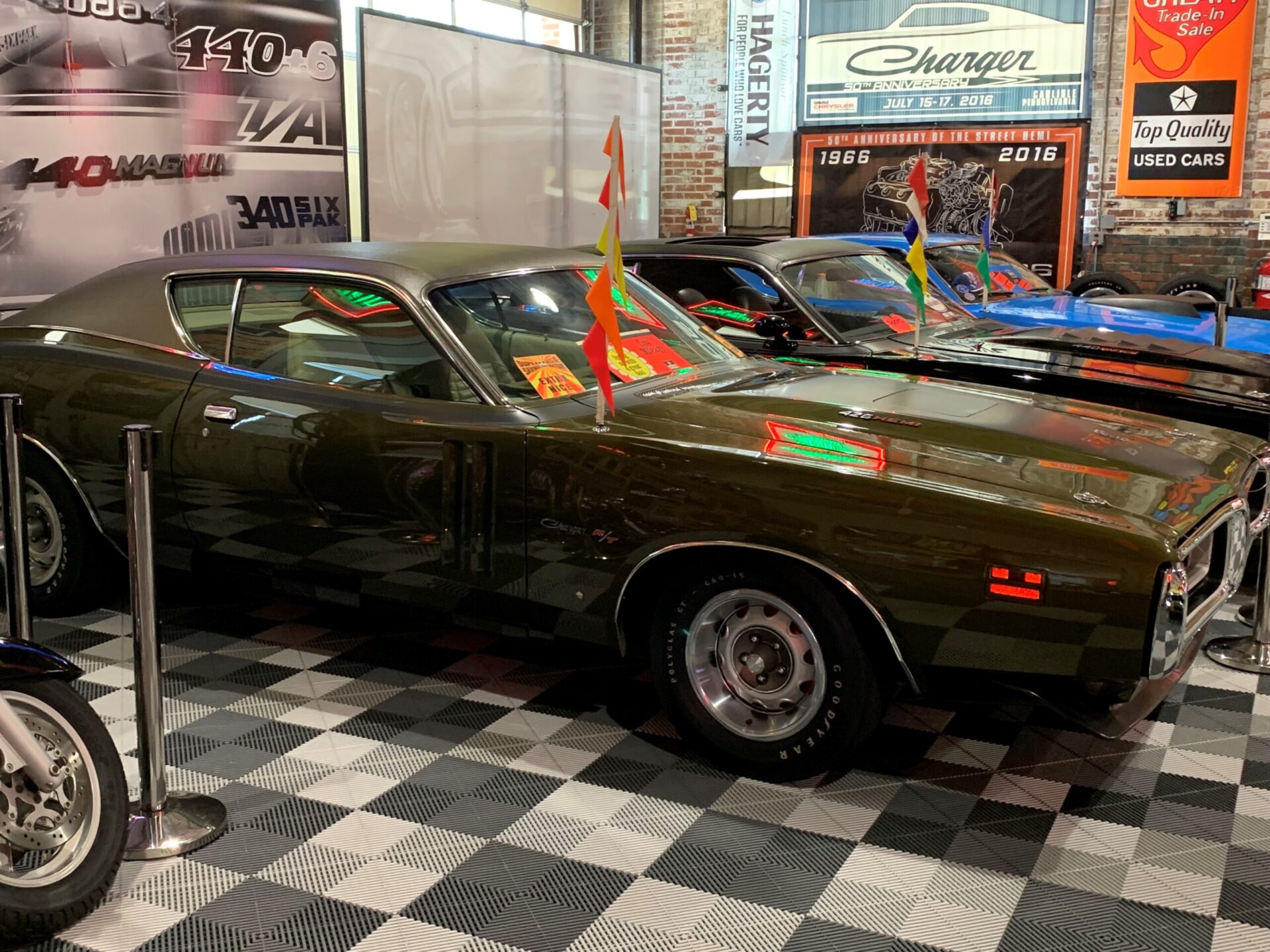 While still in high school, Tim’s father owned a 1971 Dodge Hemi Charger. Tim has often said that back in the day, sons drove what their fathers drove – if he drove a Ford, you drove a Ford.  If he drove a Chevrolet, you drove a Chevrolet. With this in mind, Tim thought for sure when he turned 16 his father would hand down the keys to the 1971 Dodge Hemi Charger to him.  This did not come to pass however, and it wasn’t until many years later – first being given to his mother and then finally to Tim – that the car ended up in his possession. However, all those years ago his father’s car fueled up a passion inside Tim for muscle cars and he hasn’t let up since.

This car has become a legend and is referred to as “Dad’s Car.” Dad’s Car now finally rests inside the Wellborn Car Museum and is on display in the lobby as the first car guests can see. 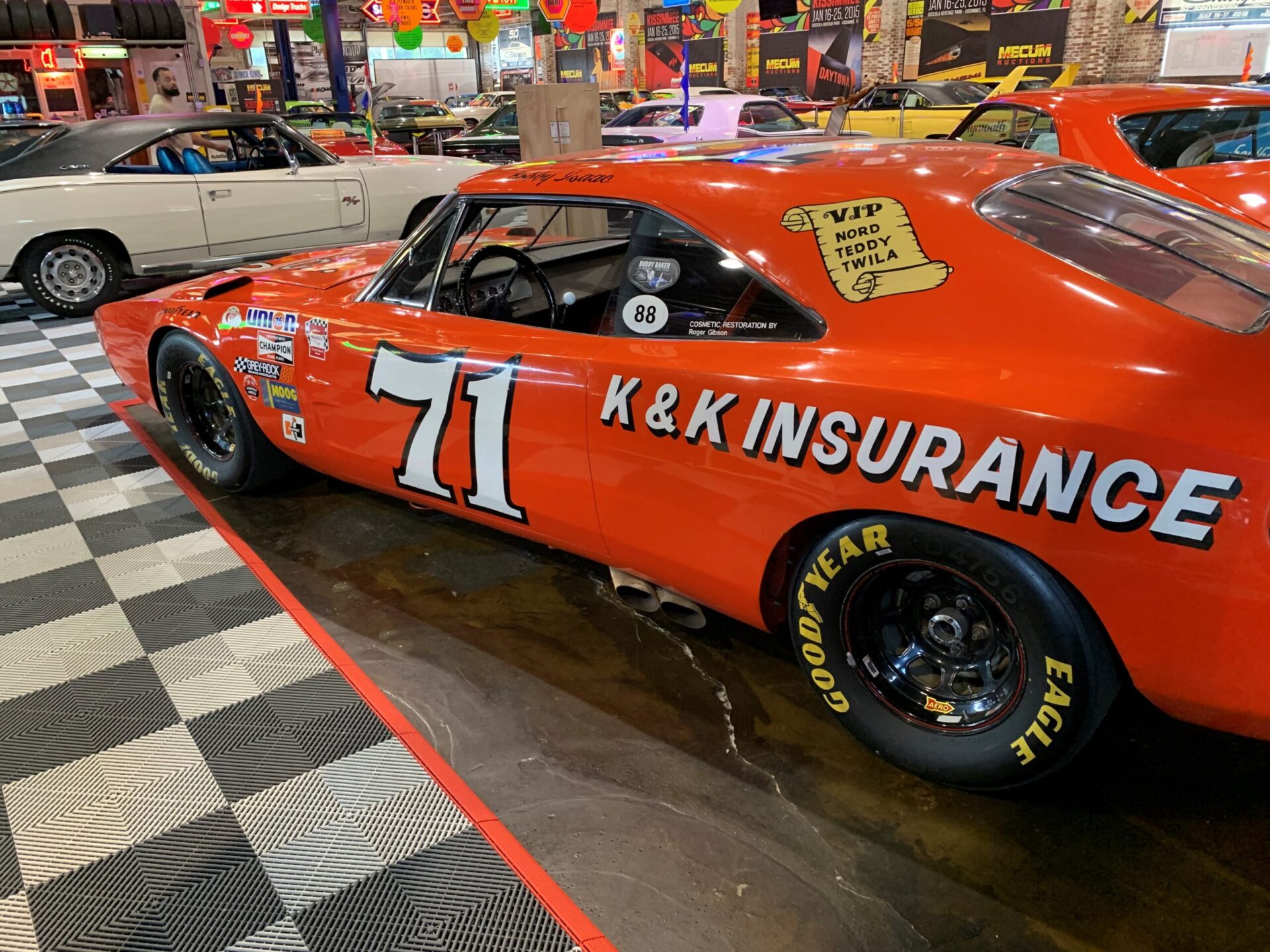 The muscle car era is thought to have started in or around 1964 with the help of NASCAR’s growing popularity. In order to race certain cars on the NASCAR tracks, it had to qualify as a “stock car” and be made available to the public as well. This was the first and only time in automotive history that a true NASCAR racing engine could be bought in an everyday streetcar. That is until 1971, when the government and insurance cars put an end to it abruptly.  This is what makes these particular cars so wildly popular.

The “K&K” car was actually the K&K Insurance 1969 Dodge Charger Daytona that Bobby Isaac drove to win the 1970 NASCAR championship. This car broke 28 land speed records and still holds some of those to this day. It is also the only Dodge Daytona from that racing era that has never been restored and still holds its original paint. It is famed to be one of the most recognizable cars in the world. 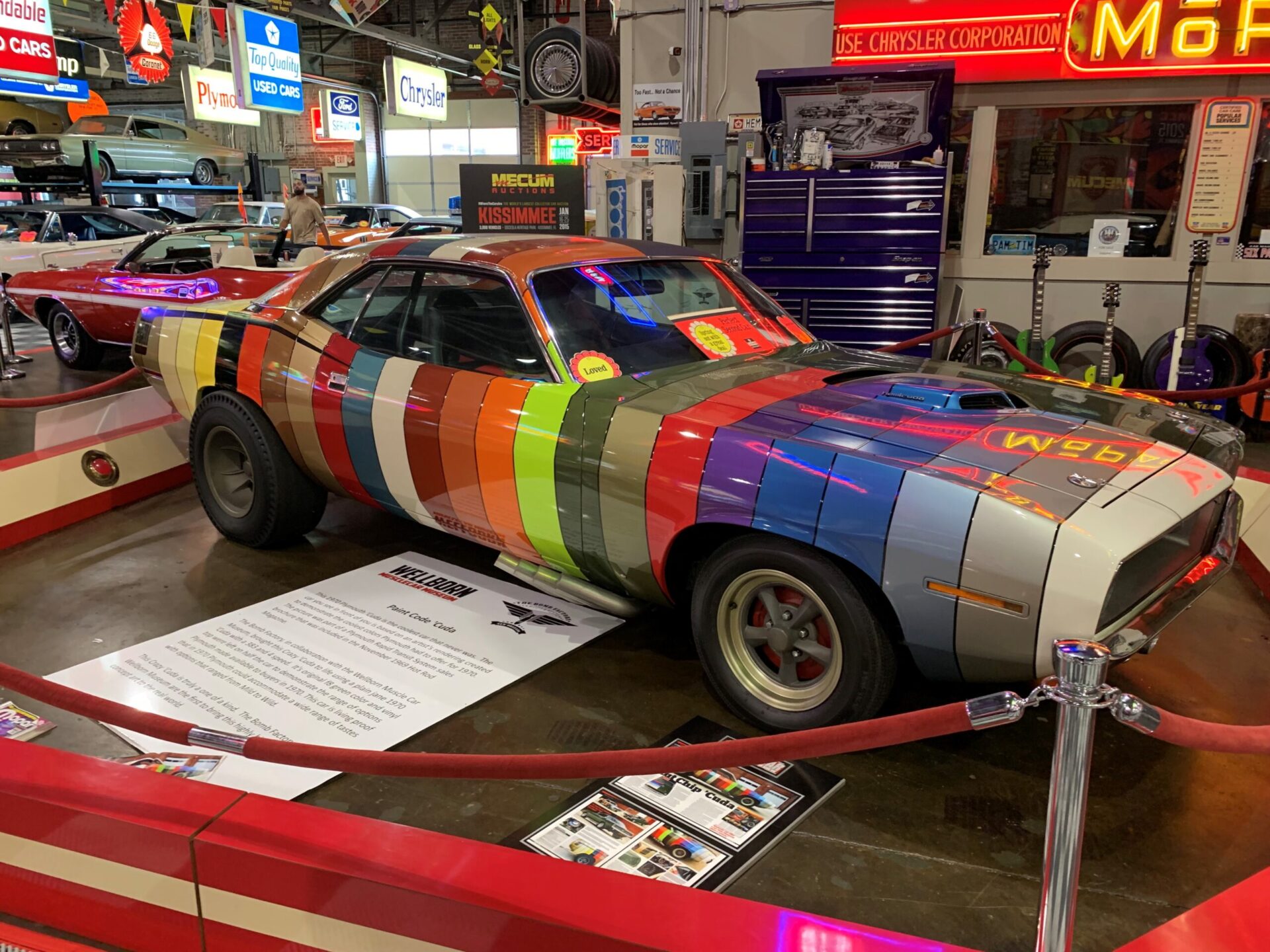 This 1970 Cuda is literally one of a kind and perhaps one of the wildest paint schemes you’ll ever see.

“The Paint Chip Cuda” was inspired by an old Plymouth brochure that advertised the ability to offer a variety of 25 different colors for a car. To show off all the different options, a mockup graphic design of a car stripped in every color was included in the ad. It was absolutely unheard of at the time to have so many color options, making the advertisement wildly popular and eventually catching the attention of Tim Wellborn.

Tim reached out to see if this car actually existed – and as you would guess, it did not.  So, Tim went to work designing this bizarre and unique car.  He purchased a 1970 Cuda and began to recreate the advertisement on one side of the car, using color wrappings to ensure that the original paint would not be damaged. The final result is a perfect replica of the original Plymouth brochure – a 1970 Cuda with the original green paint on one side and 25 brightly colored stripes on the other.

Now it is proudly displayed at the Wellborn Musclecar Museum with the motto: “The most famous Cuda that never existed until now”.

There are over 40 cars on display at a time within the museum and over 80 cars in the collection overall. Visitors are encouraged to come back again and again as the cars on display are often changing, and there is always something new to see.

Tim and Pam often say that every car in their museum has a story of its own and guests are encouraged to come and feel the passion and history for themselves. 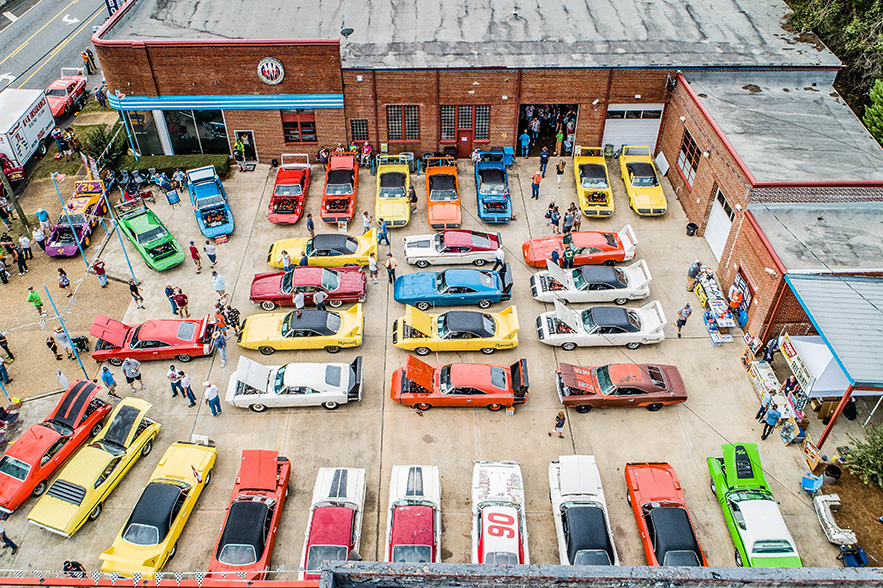 Being home to the largest collection of muscle cars in the world, it also makes sense that the Wellborn Musclecar Museum would also host some of the most exciting reunions as well.

In 2019, the Wellborn Musclecar Museum celebrated the 50th anniversary of the 1969 Aero automobiles, including the Dodge Charger, Dodge Daytona, Ford Talladega, and Plymouth Superbird.

This year, the celebration is back!  In 2021 the Wellborn Musclecar Museum will be celebrating the 50th Anniversary of both the 1970 & 1971 muscle cars. They are expecting over 200 cars to participate again this year and encourage anybody with a Mopar – regardless of the year – to attend.

The 50th Anniversary celebration of 1970 and 1971 Mopars is open to the public on Saturday, October 2nd at the Wellborn Musclecar Museum.  All muscle cars will be on display throughout Downtown Alexander City and participants are encouraged to dress in 1970s attire to match their cars.  It will be a fun filled day for all to meet other Mopar enthusiasts, walk amongst these iconic American muscle cars, and visit the shops downtown.

For additional information and submission forms you can visit the website:
70 + 71 Mopar Reunion 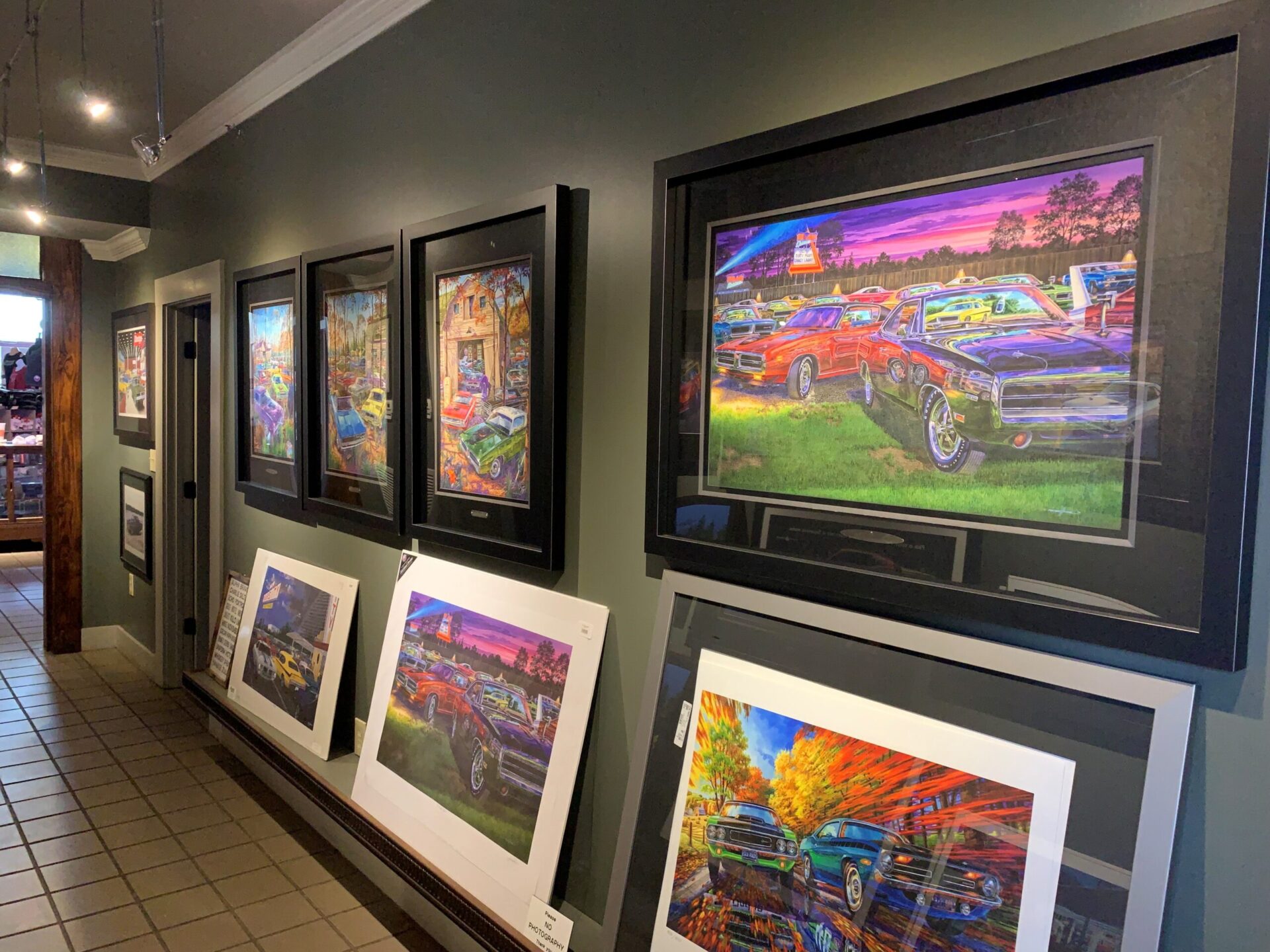 No visit is complete without stopping by the gift shop! Shirts, artwork, model cars, and more are available for purchase inside the museum.

And of course, don’t forget to sign the guest book during your visit.  Your name will be among guests from around the world – adding to the continued timeless, passionate, and historical culture that is the Wellborn Musclecar Museum.