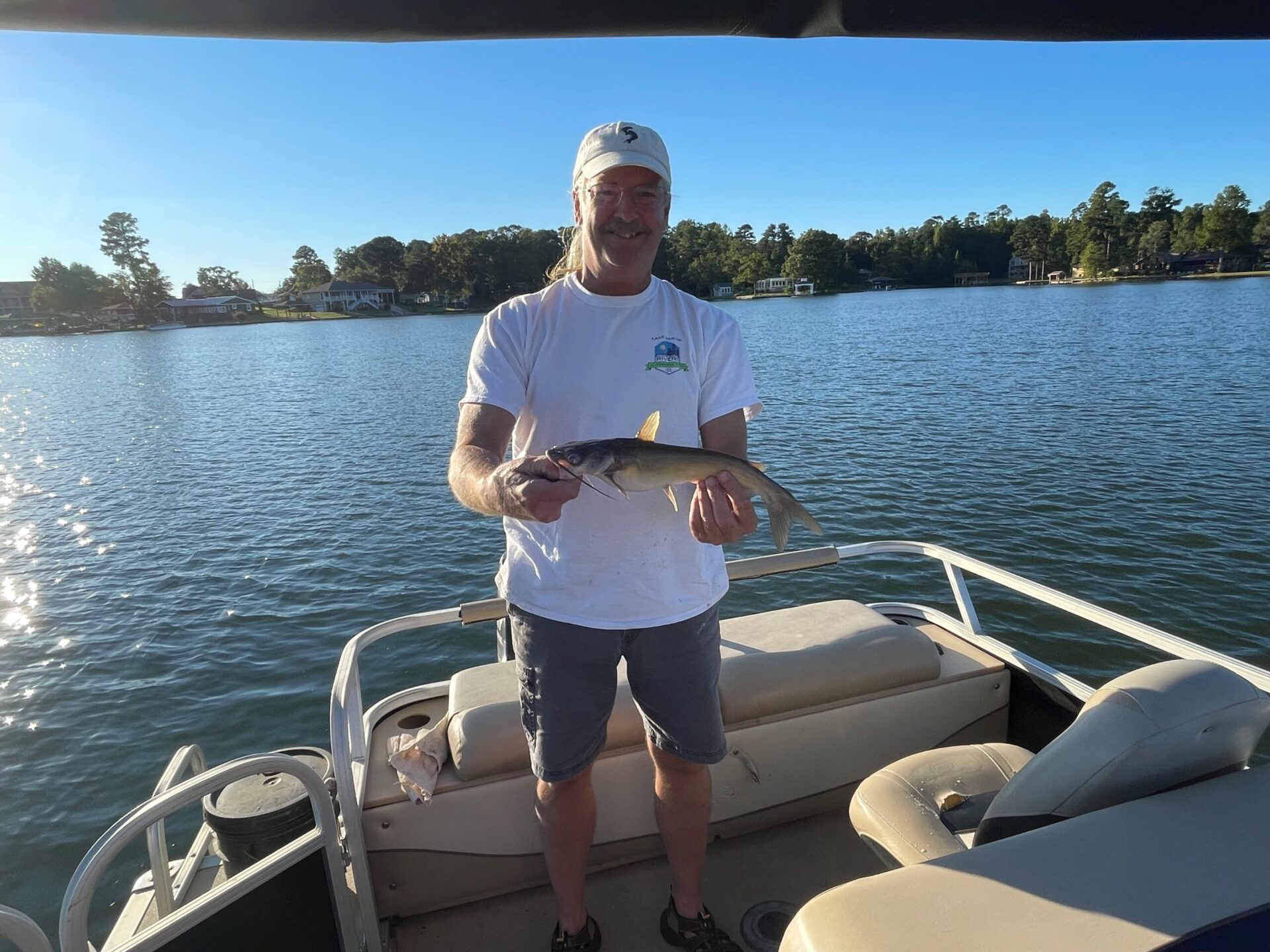 When I first moved to Lake Martin last fall, I heard so much about the bass fishing.  If you have ever even heard of Lake Martin in passing, you too have surely heard how well known it is for that.  The lake is home to largemouth, spotted, and striped bass, and anglers come from near and far to fish the waters here in hopes of catching the big one-both recreationally and competitively.  Upon my arrival, I was excited to see how many professional bass fishing tournaments come to Lake Martin for their competitive events.  It is easy to get caught up in the fun of that, and want to catch that big one yourself.  Earlier this year, when the Crank 4 Bank competition was launched, I told you about the opportunity to catch a bass on Lake Martin that was worth a million dollars.  Even though I had never caught a bass, I felt the need to gear up and hit the waters in search of my retirement plan!  While I had a blast trying to catch that elusive bass, the first fish I ended up catching was a catfish. I was fishing from shore in a little creek that day, and I would not be telling the truth if I said that catch was intentional-or that I had any idea what I was doing.  That was the accidental catfish- but it was fun to catch, and I then wanted to learn more about intentionally fishing for this species.  After asking around, I found the perfect person to teach me all about catfishing-Jerry Bynum.  Jerry has lived here for years fishing these waters, and just mentioning his name to people confirmed I had made the right decision on who to go fishing with-he seemed to be well known around here for his fishing abilities.  We scheduled our day to go fishing, I learned some new skills, caught some fish, and had a wonderful morning on Lake Martin.  Catching catfish is a great way to start the day around here, and I had to share a few of the things I learned in hopes of helping you have as great of a fishing day as I did.  Here are some important things to be aware of when fishing for catfish on Lake Martin. First and foremost, you have to time things appropriately.  When Jerry first invited me to go fishing, he sent me a list of days and times to choose from.  At first, I assumed those were just the times that worked best for his schedule, but little did I know that he had put strategic research into finding the best times for us to be on Lake Martin fishing for catfish.  Jerry told me about a website that he uses called solunarforecast.com.  The Solunar theory is based on the theory of John Alden Knight, and predicts the best times for hunting and fishing based on the Moon and Sun.  This website doesn’t just offer the best days and times for fishing Lake Martin though-you can search by country, state, city, or zip code for places around the world.  Curious if there is truth to this theory?  All I know is that Jerry used this to pick our exact day and time, and spoiler alert-we caught lots of fish.  So yes, I am a strong believer in this method now.  The website told us one of the best times to be out on the lake fishing that week was 7a-9a on a Tuesday morning.  That is exactly when we went, and we ended up with 9!  Not too shabby for a couple of hours on the lake. 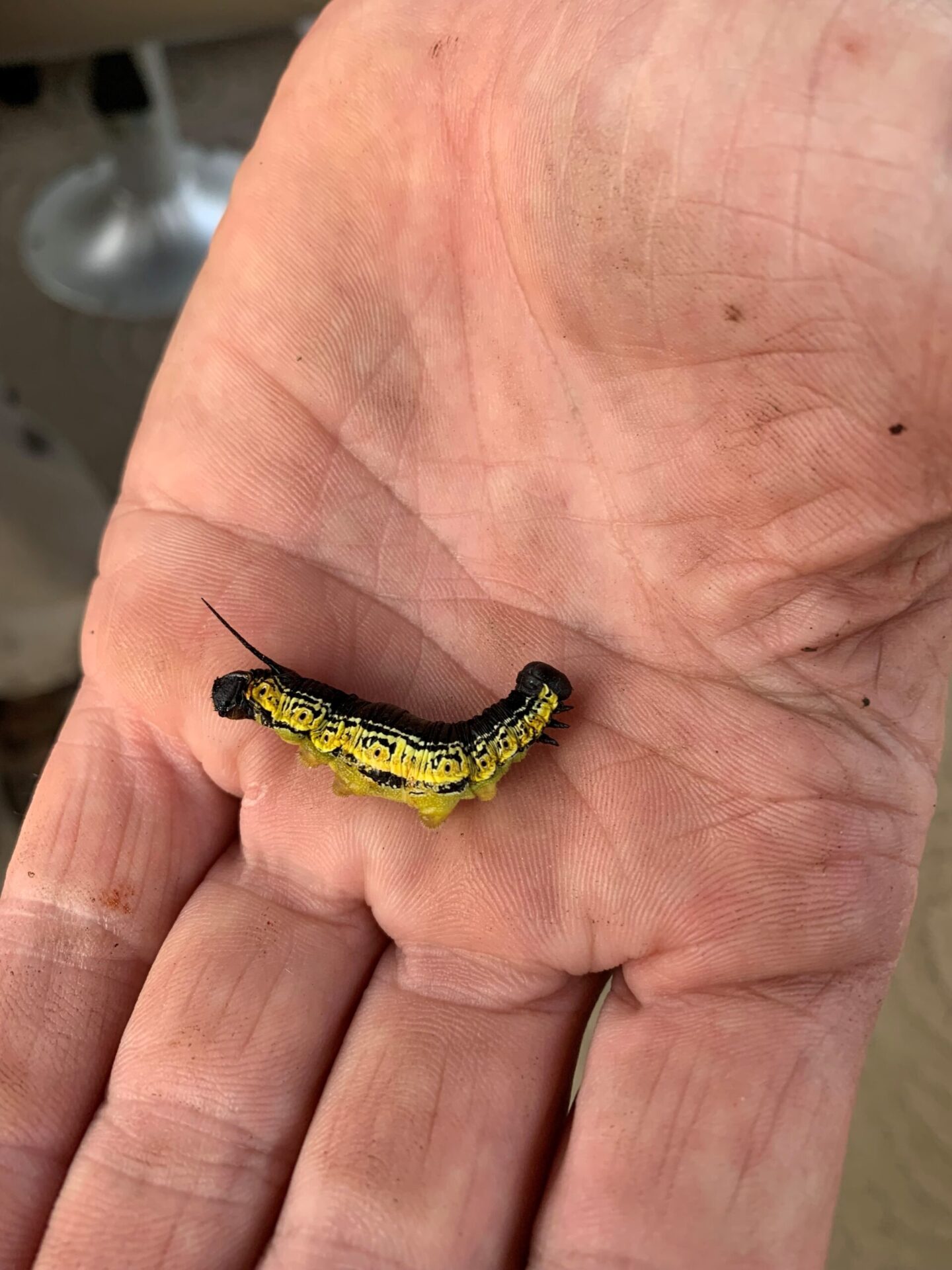 One big difference in fishing for catfish and bass on Lake Martin is the bait and/or lures that you will use.  The tackle aisle at Wal-Mart is packed with every type of lure possible for bass, in every color imaginable.  There is a lot to think about.  Bass also are fans of live bait as well, so there are a lot of decisions to make.  Fishing for catfish is a lot different, and you can just leave the tackle box full of artificial lures at home.  They highly prefer live bait.  Even the first accidental catfish I caught was on a live worm.  Jerry confirmed their love of the all-natural bait when he broke out our platter of delicacies that morning-the box of store bought nightcrawlers, the local nightcrawlers that he dug up right in his yard, and the bright and beautiful catalpa worms that he had gotten from a friend. 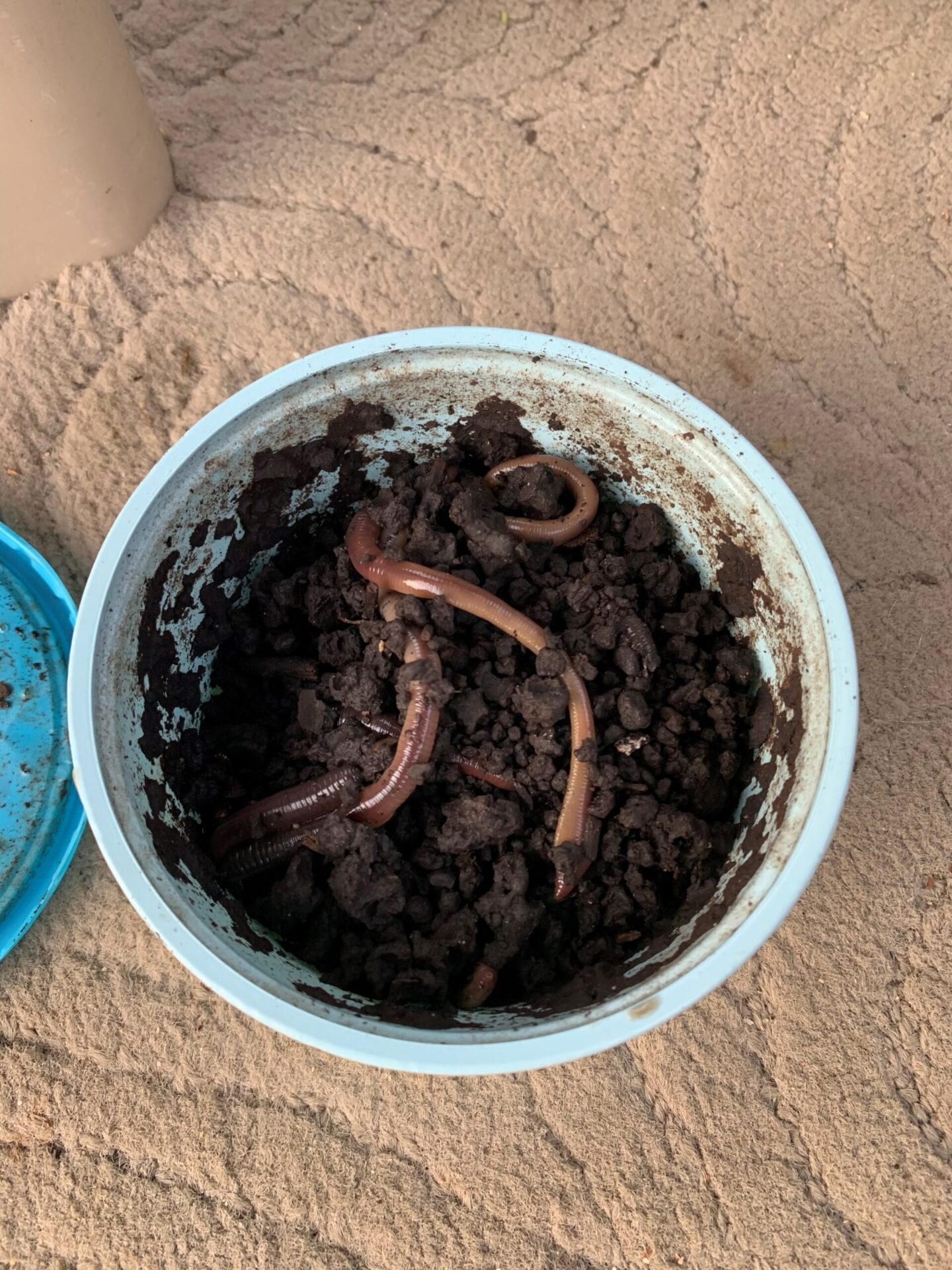 We all have different foods that we are craving on different days, and why should a catfish be any different?  We were well prepared for whatever they may be in the mood for that day.  As it turns out though, we caught fish on all 3 types of worms, and that particular day, the catfish were interested in sampling all that we had to offer.  I thought it was pretty cool to be out there fishing with bait he had found, and I think that finding your own worms and getting prepped for your day of catfishing can add to the fun as well.  We also had some special appetizers for the catfish-a special concoction of wheat and water that he had been fermenting for several days. We served this up before our main course of nightcrawlers and catalpa worms, and the catfish loved it.

Having the Appropriate Rig 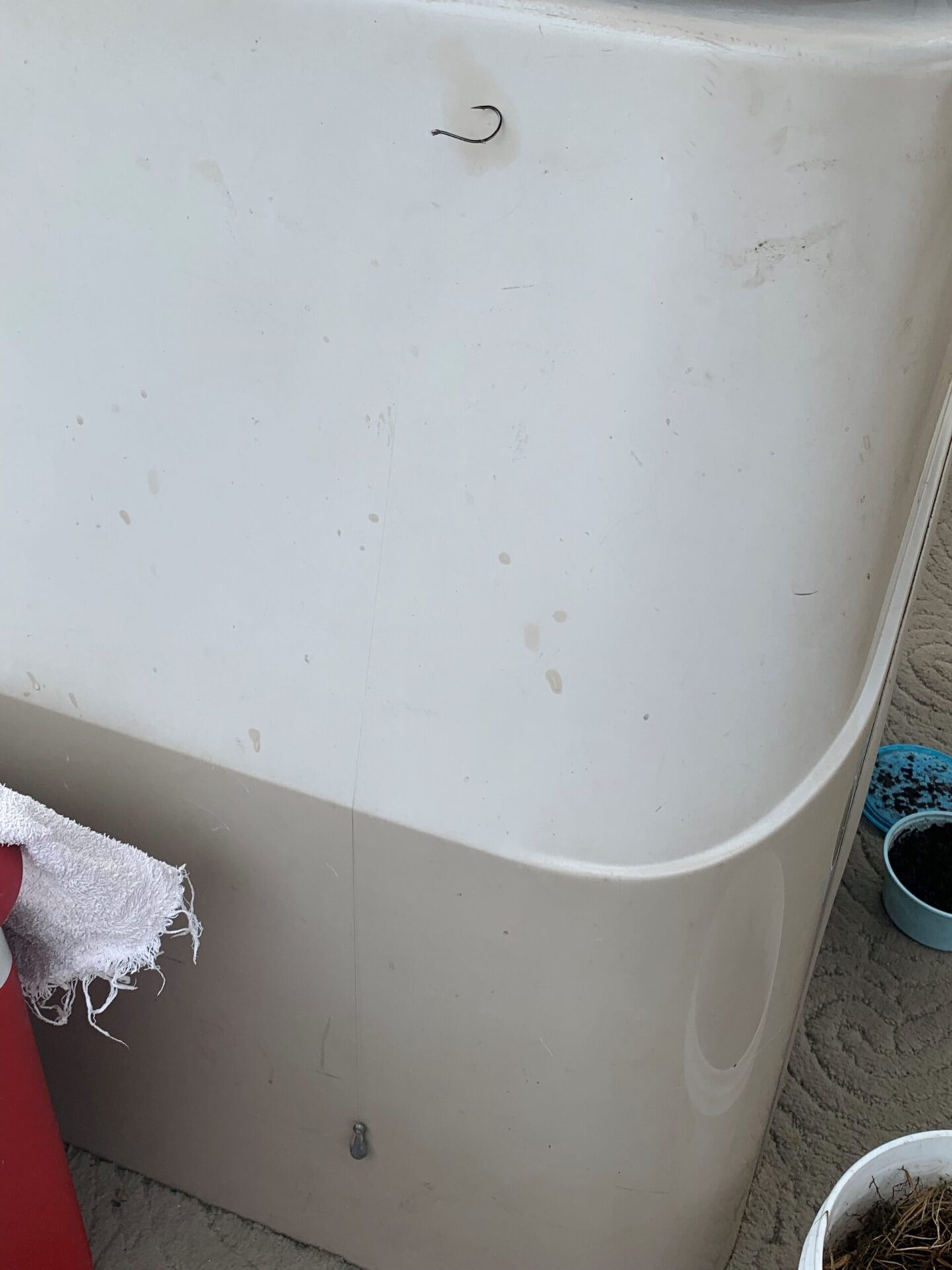 When I caught the accidental catfish, I will admit, I definitely was not rigged up appropriately.  I had a worm on a hook in a creek and was just trying anything to catch that million dollar bass at that time.  When I went out with Jerry, I learned the actual techniques behind catching catfish.  The rig that he had set up had a ¾ ounce weight on the end of the line, and about 18 inches up, was the hook.  There are special hooks used for catfish, so when you hit up that tackle aisle at Wal-Mart, even though you can forgo the artificial lures, you do want to make sure to pick up weights and catfish hooks.  The rig that he had set up allowed us to cast, and drop our lines to the bottom.  Once the weight hits the bottom, you will feel it, and your hook will be about a foot and a half off the bottom.  We used a landmark to see where we had originally dropped the fermented wheat appetizer, and drifted over that awaiting the bite of the fish.  It wasn’t long before it came-again and again and again.  Nine times to be exact! 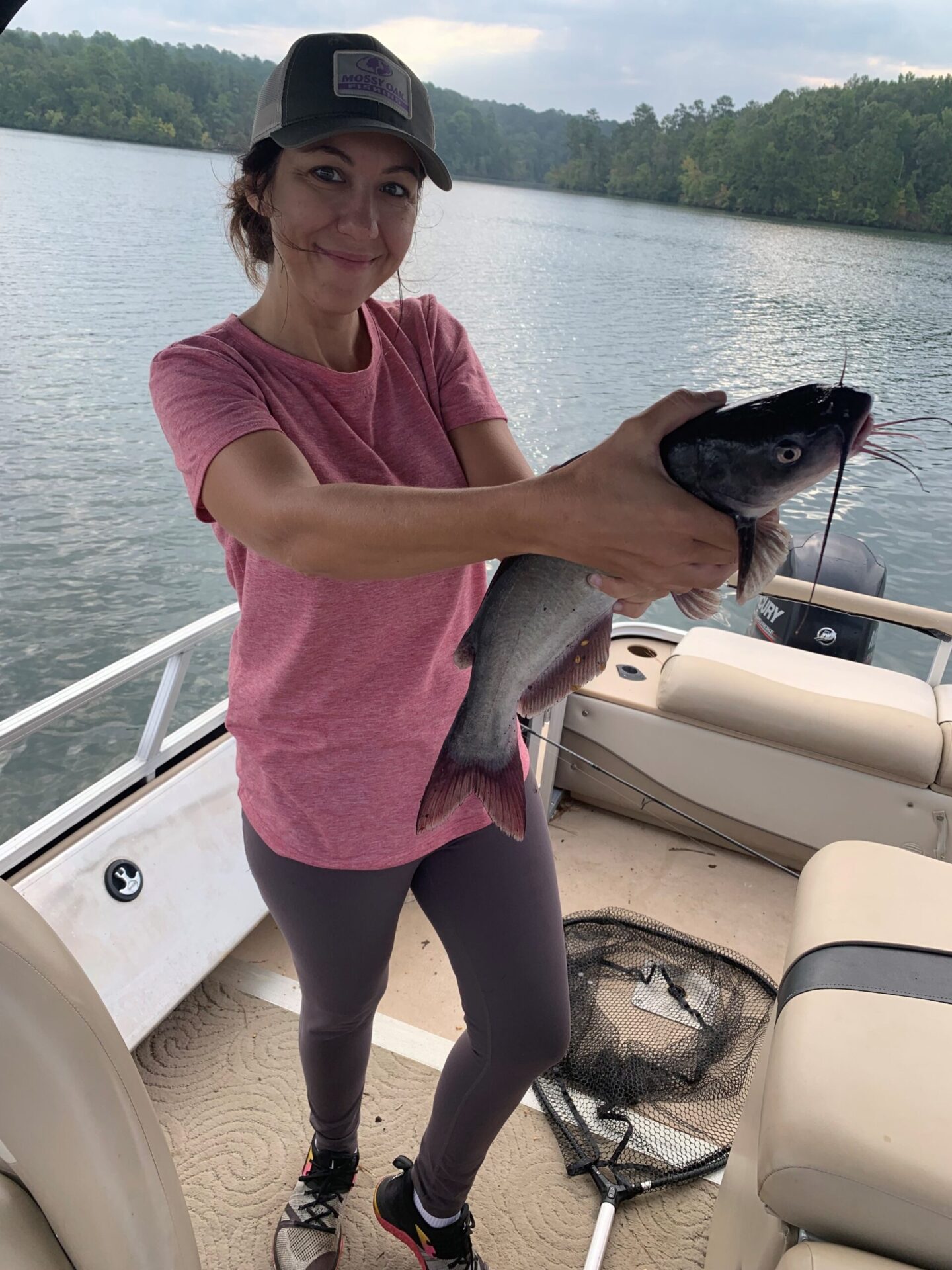 I may have caught the first fish that day, but Jerry definitely caught the biggest.  He was kind enough to let me pose with it, but I can’t not give credit to him for that awesome catch! 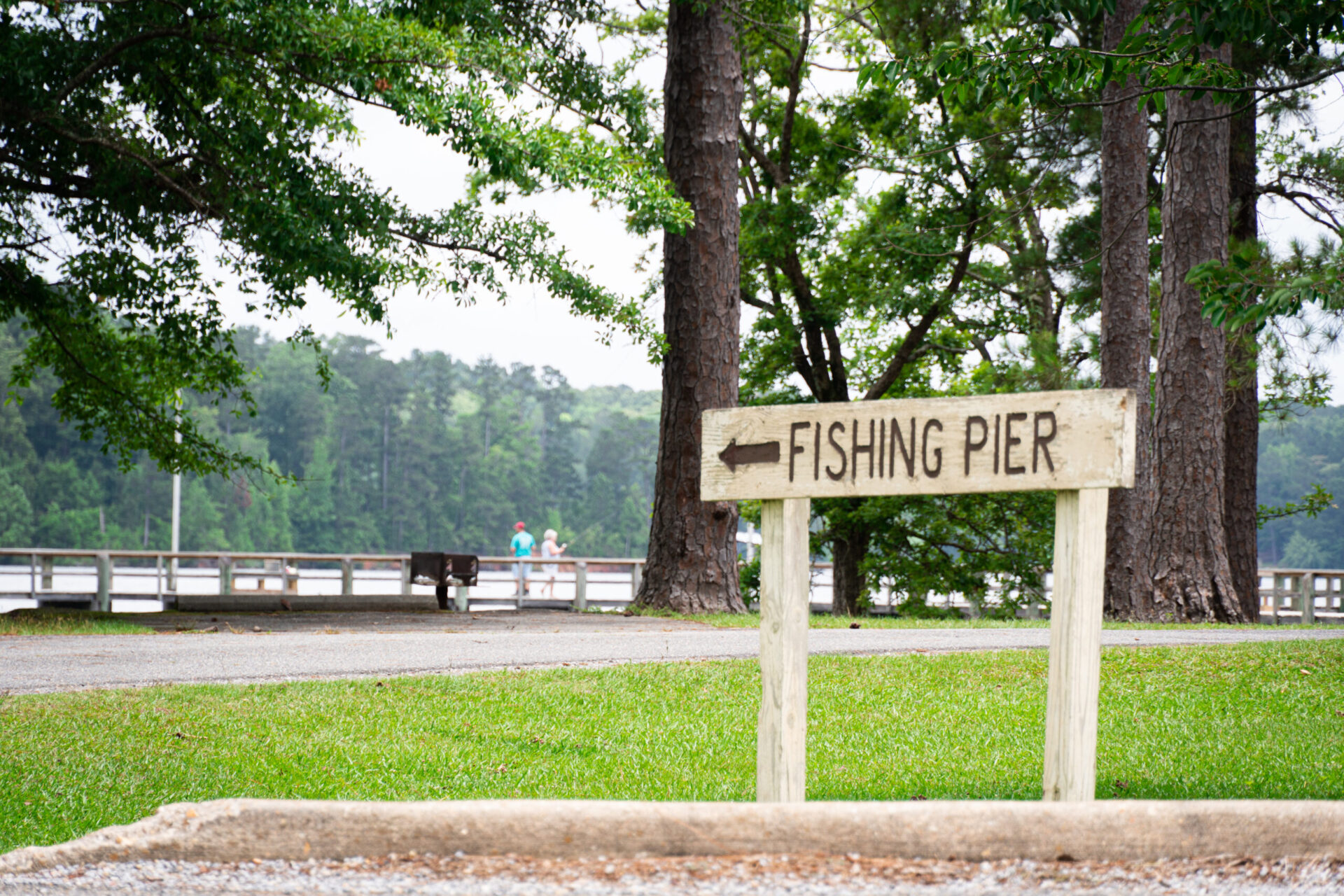 Like most local anglers, Jerry has his honey hole.  I’ve already revealed too many of his insider fishing tips today, so I won’t give away his special fishing spot on the lake.  I do want to get invited to go fishing again!  If you do come out fishing on Lake Martin, you will find yours too.  Even if you don’t have your own boat, there are many options for renting a boat on Lake Martin.  However, although we were out on the boat, catfish can also be caught from the shore.  Wind Creek State Park has a great fishing pier, and actually has a marina store right there on property too in case you need worms, hooks, weights, etc.

How to Fry Catfish In conclusion, I will just say that catfish are one of the most fun fish to catch.  We had such a good time out catching catfish on Lake Martin, and it was such an awesome feeling to be reeling in one after another!  On top of having so much fun catching them, catfish also happen to be one of the most delicious fish in my opinion.  There is no southern food I love more than some good fried catfish-and it is even better if it is fresh!  Jerry makes cooking them seem so easy too.  The one important key is to make sure they are dry. 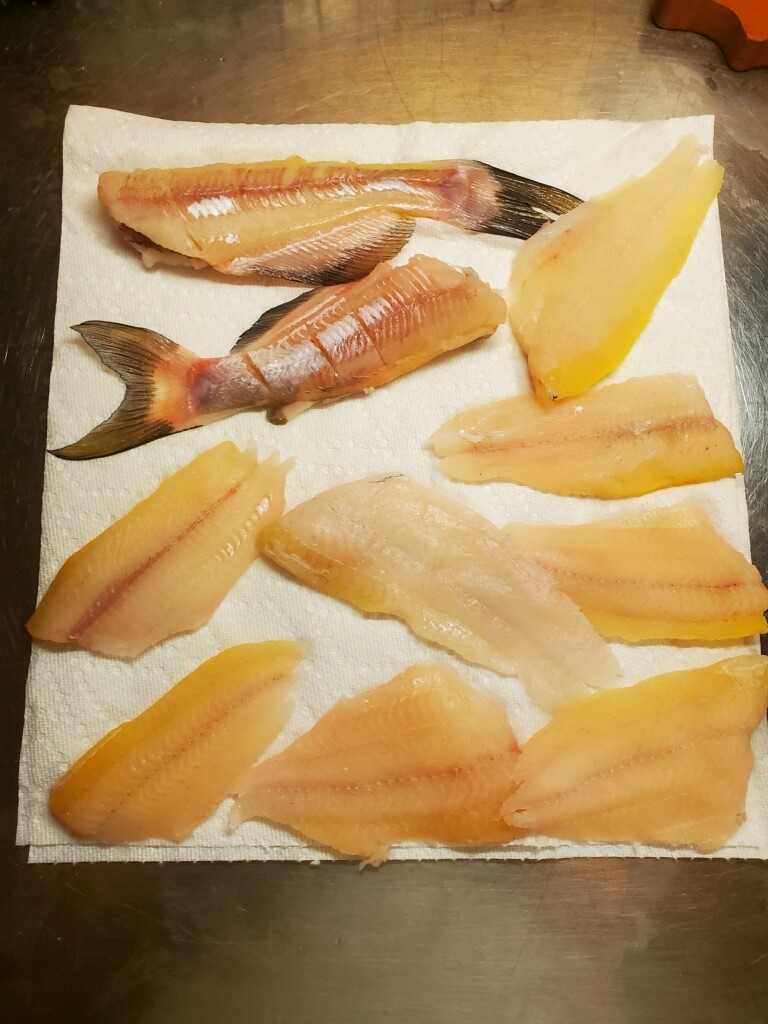 Pat the filets until they are as dry as you can get them.  Some people think you are supposed to dip them in milk or water, but his secret is to skip that part.  He just batters them in cornmeal, deep fries them, and serves them up with french fries and homemade hush puppies.  So easy, but so delicious! 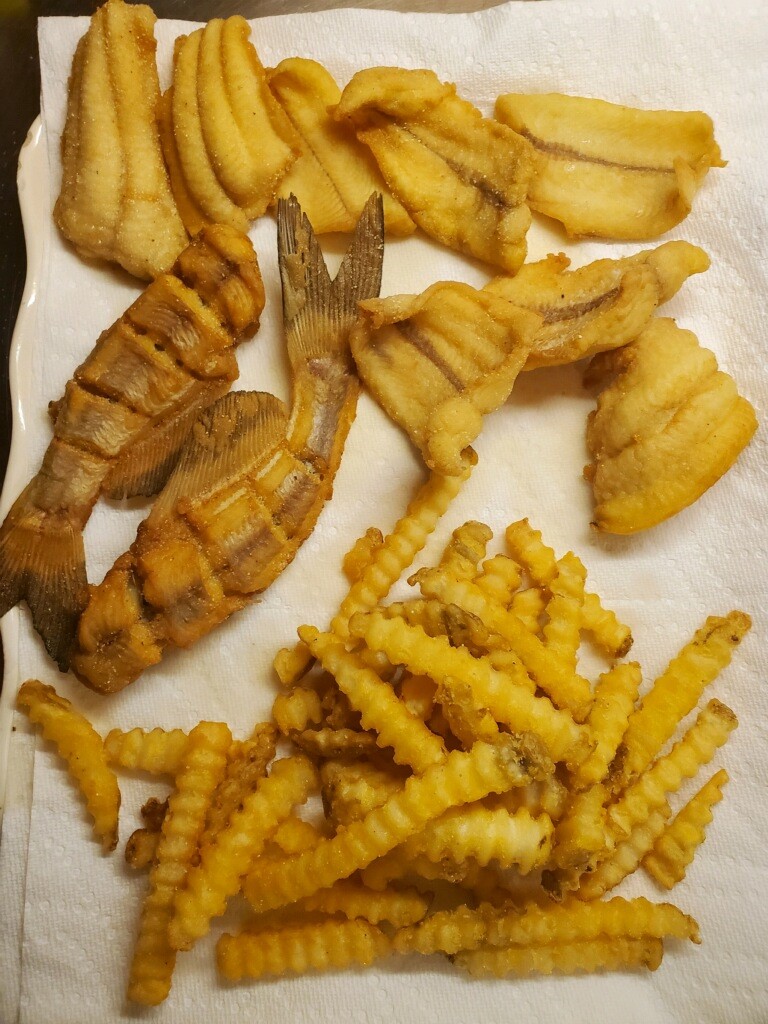 If you haven’t spent time fishing for catfish on Lake Martin, I highly suggest it.  Even if you are not a pro, these tips will get you on your way, and soon you will be reeling in the big one!  Tight Lines!