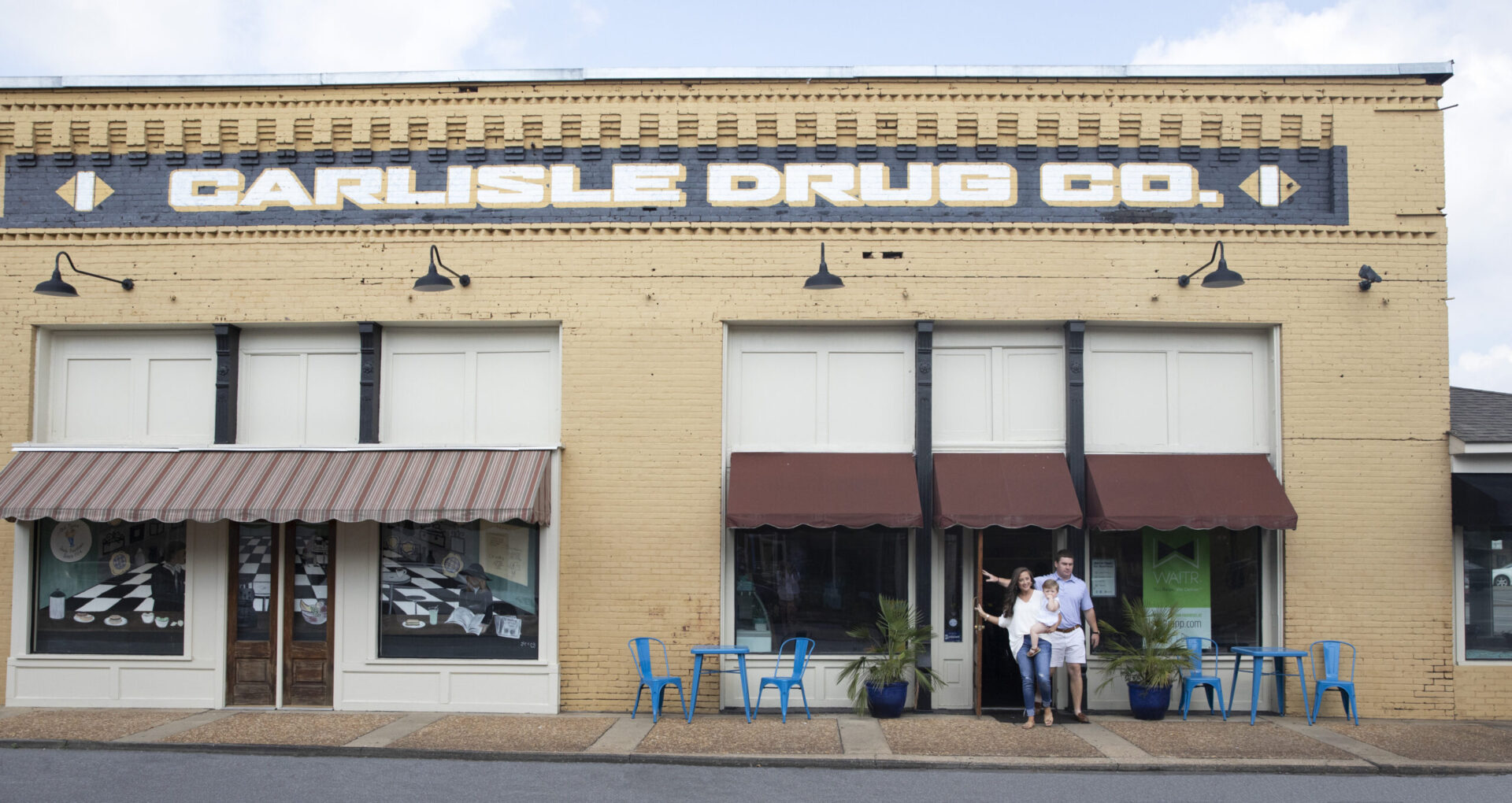 Alexander City is home to the Lake Martin community! And the downtown district is the heartbeat.  Filled with local shops, great food, and vibrant entertainment, just one visit and you will fall in love with this small town too!

As with many small towns in South Alabama, Alexander City is filled with rich history and urban legends, and the downtown district is no exception.

Following the historic battle of Horseshoe Bend and the eventual succession of territory from the Creek Indian nation, the county of Tallapoosa began to take form.  In 1837, the first permanent settler by the name of James Young acquired 320 acres of land, making up large portion of what is now present-day southwest Alexander City.  Almost 35 years later, this territory was named “Youngsville” and sparked the beginning of the town we now know today.

But Youngsville didn’t last long.  A year after it was incorporated, a new railroad system came to town. The townsfolk were overcome with excitement, and in 1873 Youngstown was renamed to “Alexander City” in honor of the S&M Railroad president, Edward P. Alexander.

Perhaps the most famous piece of Alexander City history however is the fire of 1902. Rumor has it that a fire broke out in the Alexander City Machine Company shop at 1 o’clock that fateful afternoon. The wind had kicked up particularly rough that day and the flames spread rapidly from building to building. The fire devastated the entire town, burning every business, house, three banks, and even the post office in it’s path, practically wiping it out entirely.

The fire was so devastating, the news broke in newspapers across the nation and even made an appearance in the New York Times. It was reported that the city had not been equipped with water works at the time and the destruction itself would only be partially covered by insurance.  The damage ended up totaling to over $400,000, the equivalent to millions in present day. The New York Times also reported that the telegraph office had been destroyed and all telephone communication with the town had been damaged, making it impossible to learn full details of the fire.

Urban legend has it however that the mayor of Alexander City at the time, B.L. Dean, had buried a newspaper and bottle of rum into the cornerstone of the town Courthouse years earlier while it was being constructed.  These two items are rumored to have survived the 1902 fire. 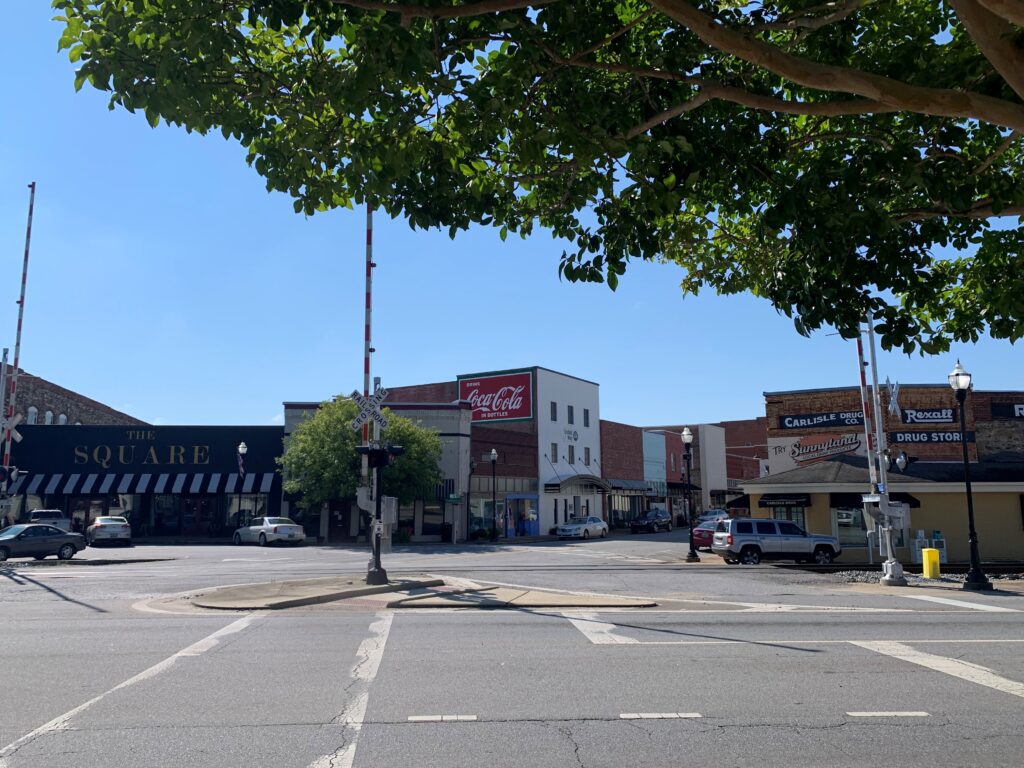 Today, downtown Alexander City is described as a quaint and unique town square with small town vibes, filled with local shops, great dining options, and a vibrant atmosphere. The lively district hosts a variety of weekly entertainment and seasonal events with the goal of bringing the community together.

The group behind the scenes supporting the local businesses is “Main Street Alexander City”, a non profit organization dedicated to the revitalization and promotion of historic downtown Alexander City, AL. Funded solely by donations, they put their heart and soul into beautifying and rejuvenating the area, driving traffic to the downtown district, and hosting gatherings for the community. They also support the local businesses with new signage, advertisement, and even small business grants.

When asked, “Main Street” Executive Director Stacey Jeffcoat says that downtown is the heartbeat of Alexander City, and it is the people in the community that makes it so special. 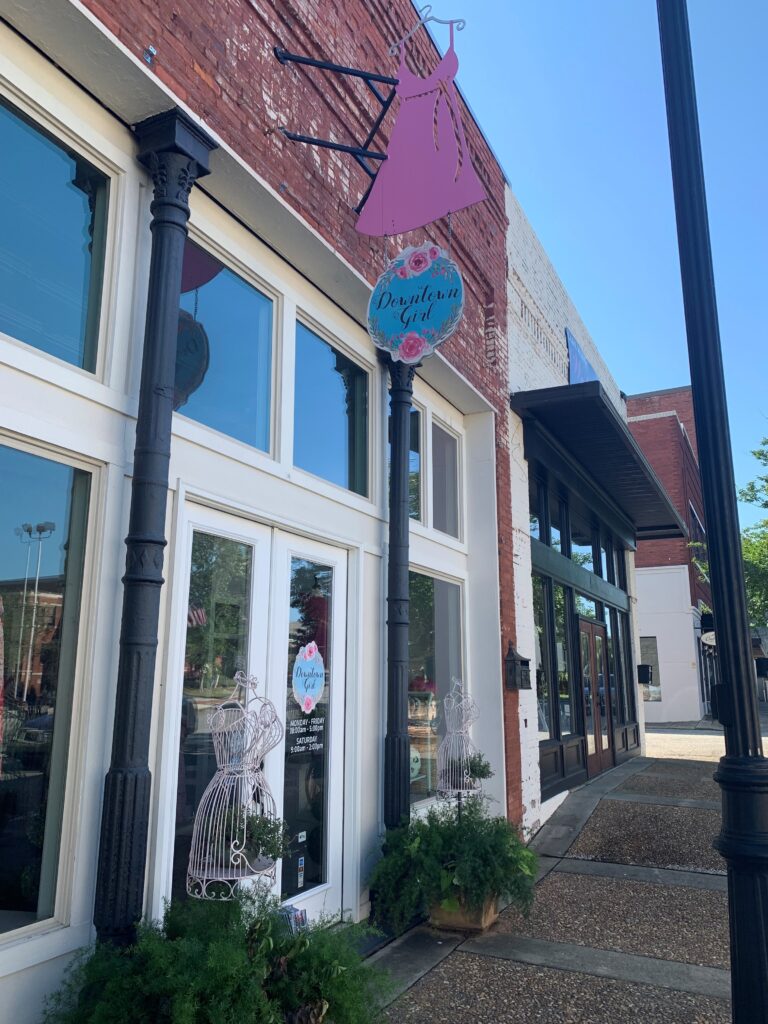 There are many great boutiques and shops full of the latest fashions, home decor, gifts, and more. Check out shops like Downtown Girl, Cloud 9, For Heaven’s Sake, and more. You may also want to go shopping for some of the best wines at Emporium Wine. Check out a list of all downtown shopping options on the Main Street Alexander City Map.

Locals will tell you no trip to Alexander City is complete without taking a stroll through “The Square”. This New Orleans inspired building is one of the most unique shopping centers in the Lake Martin area. It features retail shops, a breakfast and lunch café, local artwork, event space, and even small offices – all located under one roof.  Second story balconies overlook the long stretch of hallway, complete with wrought iron railings, string lights, and an old-time analog clock, giving visitors the vibes of strolling the brick sidewalks of Bourbon Street and the French Quarter.

Along with excellent shopping and dining options, visitors can catch live music and entertainment here as well. You can also rent out space for your event. The Square is a great venue for bridal showers, birthday parties, Christmas parties, etc. 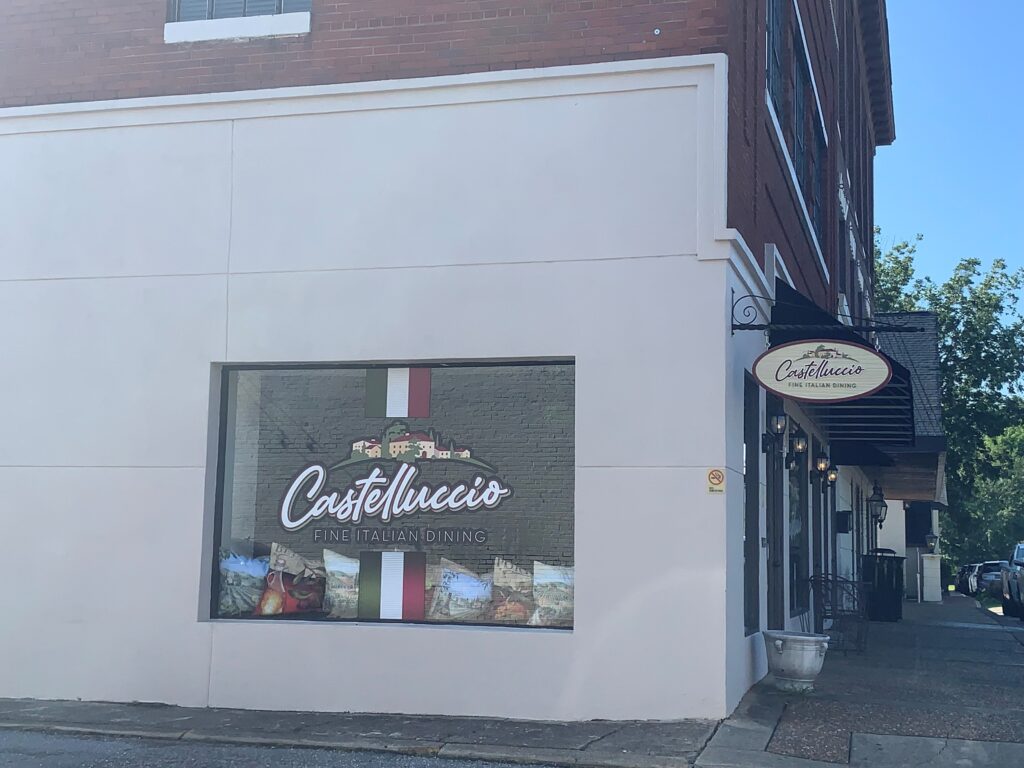 Some of the best food on this side of Lake Martin is located right in the heart of downtown Alexander City. Visitors have the option of choosing dishes from all around the world with these restaurant choices. Bite into a slice of Italy at Castelluccio, order a perfect quesadilla at Carlos Mexican Grill, or even have a taste of the Caribbean at Carib Kitchen.

However, if you really want to step back in time I recommend grabbing a bite to eat at Carlisle’s.  Originally opening in 1914, this historic restaurant is one of the oldest soda fountains in the state. Though locally it is known for its cherry limeades and chicken salad, guests can choose from an extensive menu of hot paninis, soups, ice cream, and more. Complete with black and white checkered floors and a gift shop in the back, this is the perfectly wholesome place to visit with the whole family.

Check out a list of all downtown dining options on the Main Street Alexander City Map.

Alongside with shopping and dining, downtown Alexander City is home to a really unique experience. 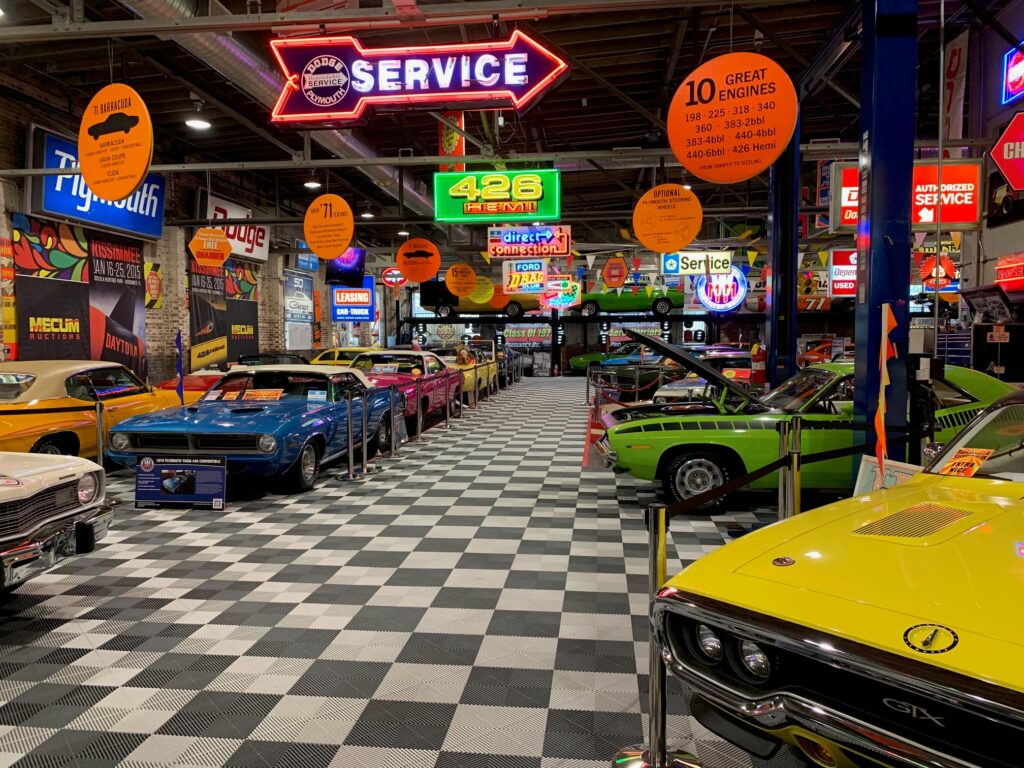 Starting originally with a 1971 Dodge Charger R/T Hemi, the Wellborn Musclecar Museum boasts as one of the finest Musclecar collections in the country, and for a good reason.  Guests can walk amongst fully restored classics such as the Charger, the Road Runner and the SuperBee, as well as the nation’s largest high-performance Dodge collection. With black and white checkered floors and old school dealership signs, it is sure to make a memorable afternoon for the family.

The Wellborn Musclecar Museum is open on Saturdays from 10AM – 3PM and Monday through Friday by appointment only.

Located in the heart of downtown is a space referred to as “The Plaza”.  Here is where visitors gather to enjoy a variety of monthly and seasonal entertainment such as live music, farmers markets, games, and much more! Events are free for everyone to attend, with the purpose of gathering together the community for a great evening of socializing and having a good time. 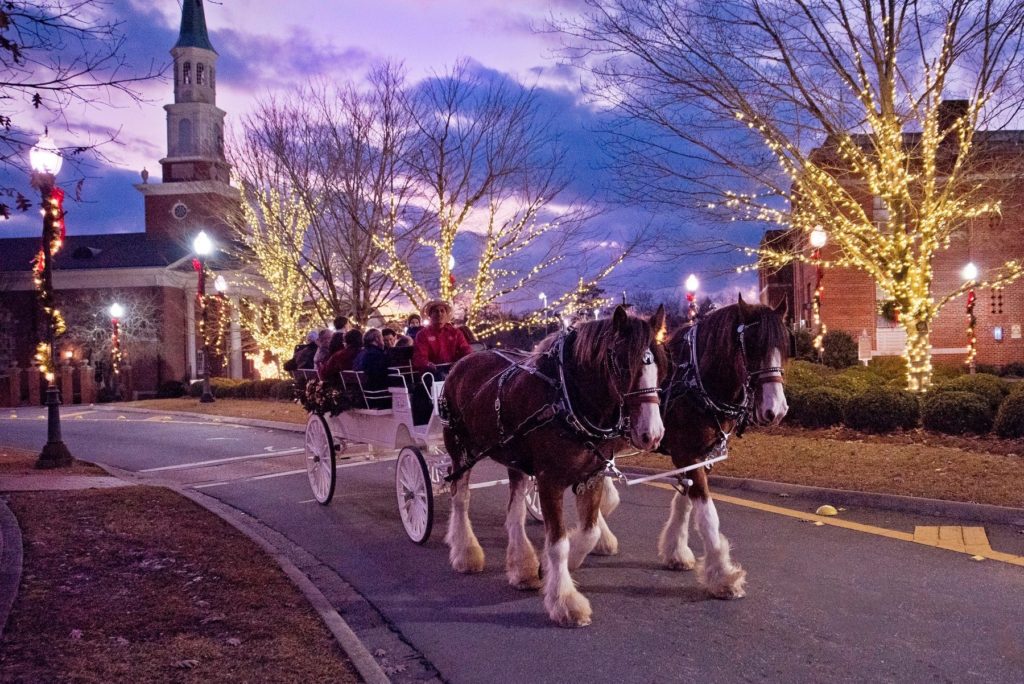 The Alex City Farmer’s Market- A Farm to Table Market
Every Saturday from June through September, Broad Street in Alexander City is filled with farm fresh products.  Over 20 vendors line the plaza selling locally sourced eggs, produce, baked goods, jellies, soap, and much more! This is as close to farm to table as you can get.

The Alex City Farmer’s Market runs from 7AM – 11AM every Saturday, June through September.

Third Thursday
From April to September, every 3rd Thursday of the month is celebrated in downtown Alexander City!  From 5PM – 7PM the entire district is filled with sounds of live music and excitement as visitors stroll through the Art Walk, sip on wine, and do a little late night shopping.

Bingo Under The Stars
Feeling lucky?  Come grab a Bingo card and enjoy an evening playing everyone’s favorite game! Bingo Under The Stars is every 4th Wednesday of the month, April through September, beginning at 6PM. Players meet in the alley in front of Castelluccio’s Italian restaurant.  The chance to win prizes and a cash jackpot will have you wanting to shout “BINGO” too!

Seasonal Events:
Every year Alexander City hosts the community to a variety of celebrations in the downtown area. Mark your calendar for these seasonal events!

The Great Pumpkin Patch
When Fall is in full swing, what better way to celebrate than finding the perfect pumpkin at the downtown Pumpkin Patch! Conveniently located at Strand Park, guests can choose from countless gourds and pumpkins of all shapes, sizes, and colors making the perfect pick for your Fall decorations or spooky jack-o-lantern. The pumpkin patch typically runs the last two weeks in October and all proceeds benefit “Main Street”, the Alexander City nonprofit.

Harvest Festival
Get into the spirit of Halloween at the Harvest Festival!  Located at Strand Park, it is the perfect place for friends and family to gather together and enjoy a day of games, arts & crafts, face painting, bouncy houses, and more!  The Harvest Festival is typically scheduled for the last Saturday of the month.

Downtown Trick or Treat
This trick-or-treating isn’t just for the kids! Dress up the family in your favorite costumes and head downtown for some Halloween fun.  While your little ghouls and gobblins trick-or-treat with the merchants, you can enjoy some spooky good sales at the local stores.

Halloween Bar Crawl
It’s a Monster Mash! This one is for our readers who are 21 and up.  Dress up in your spookiest costume and hit the downtown scene to catch live music and good times while bar hopping around different restaurants in the downtown square. Plus, your creative costume could also when you cash prizes, which is definitely something to howl about!

Breakfast With Santa at The Square
Ho! Ho! Ho!  Santa Claus is coming to town… square that is! Every December good little boys and girls can have breakfast with Santa and his helpers at The Square in downtown Alexander City.

A Downtown Christmas
Experience the magic of Christmas with a day in downtown! Nothing sparks Christmas joy like taking a ride on the Polar Express Train, snapping photos with Santa Clause, and making ornaments with Mrs. Clause.  Guests will also have a chance to write letters to Santa and shopping the Holiday Market for great last minute Christmas gifts.