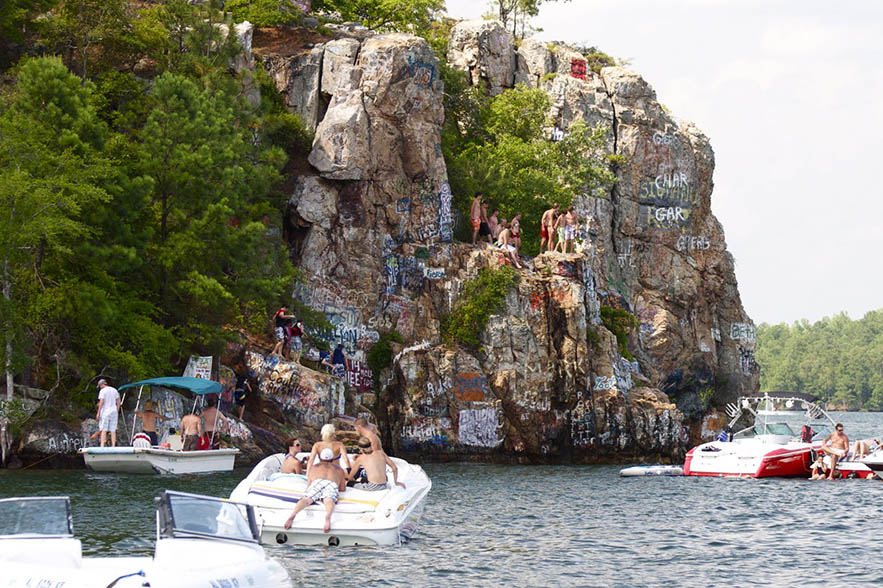 Chimney Rock is easily one of the most iconic landmarks at Lake Martin, Alabama. Located near the Ridge Marina, it is easily recognized by its colorful graffiti and usually a large gathering of boats. On any given summer day, you can hear music cranked up and see the boats connected and enjoying the Alabama sunshine! Chimney Rock is a staple to the Lake Martin community – and here is everything you need to know to go out and enjoy it! 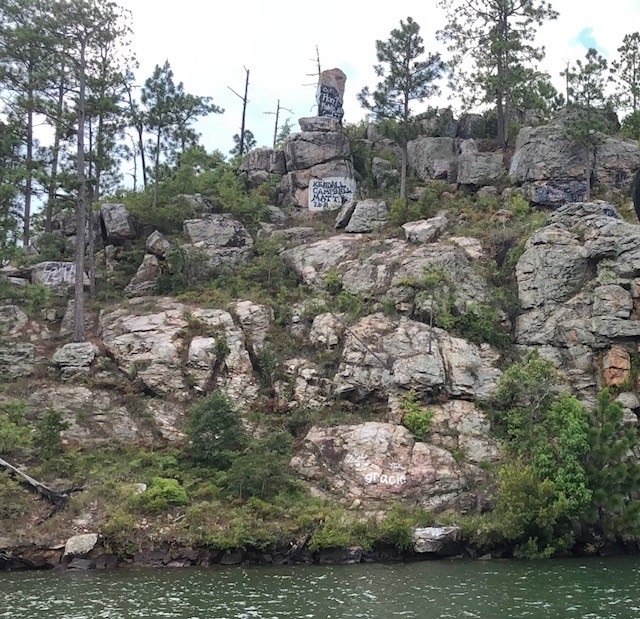 To set the record straight, what many refer to now as Chimney Rock is actually “Acapulco Rock.” The real Chimney Rock is a separate island of massive rock formations, that is located near the rock most know as Chimney Rock. It can be identified by a tall, singular stone that juts up at the top, giving the appearance of a “chimney” growing from the stony cliffs – hence the name.

Just beyond this landmark however is another island, Acapulco Rock, which has now taken over the iconic Chimney Rock name and over the years has become the famous main attraction. It is a wildly popular hang out spot on Lake Martin and can easily be spotted by the layers of brightly colored spray paint graffiti and a crowd of boats. 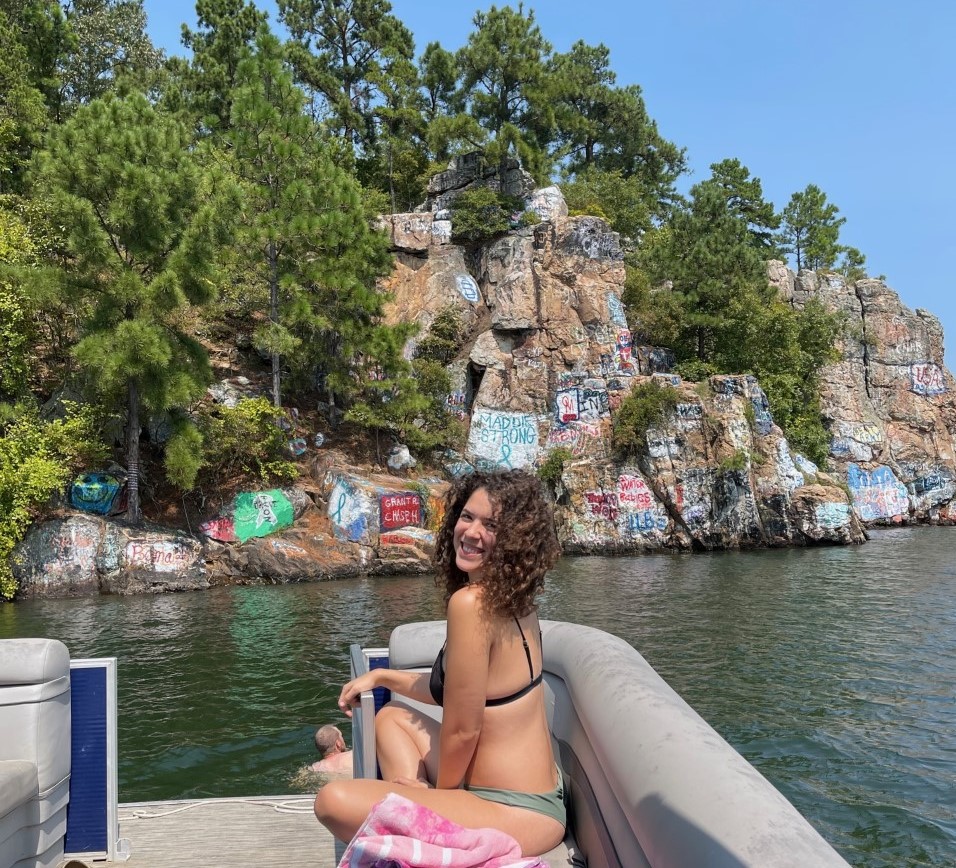 One of the most notable features of Chimney Rock is the colorful display of graffiti artwork across its surface. The spray-painted images are often portrayed in paintings, t-shirts, and photographs. And in many ways, the artwork has become as iconic as the hangout spot itself. Some of the more notable images can date as far back as several decades, somehow surviving the Alabama sun and other ambitious artists.

But what people don’t know is that many of these images actually have special meanings behind the art. Many of the names and college logos are painted in honor of a loved one or in their memory. I took the time to track down and interview a few of the artists this past summer and was surprised to hear their inspirational stories behind braving the climb and painting Chimney Rock.

There are some tips and tricks to painting Chimney Rock, but unfortunately, I cannot share them here. It is not legal to spray paint Chimney Rock – so we do not recommend it. But for now, we will just have to admire the artwork already there and the years of memories currently displayed. 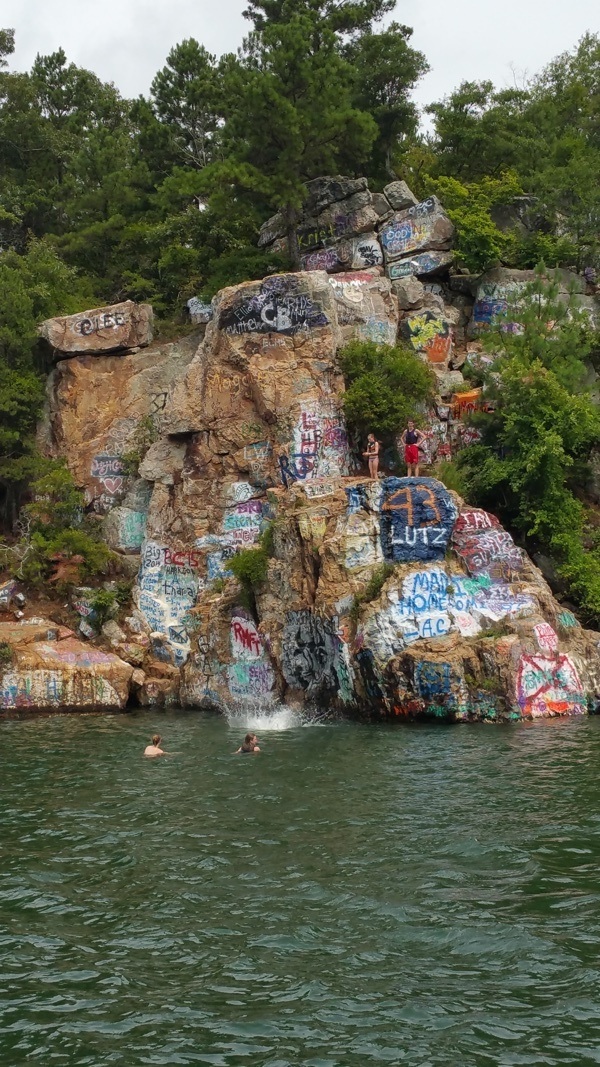 Disclaimer:  We do not encourage or recommend that you jump from Chimney Rock.  It is very dangerous, and people have been seriously injured.  With that said, on any given summer day, you can usually find a large gathering of boats circling Chimney Rock, with people watching and cheering on daredevils as they leap off of the three main cliffs: Chicken Rock, Acapulco Rock, and Lost Boys. These three cliffs all range in height, anywhere from 20 feet high to a whopping 60 feet above the water.  However, locals will tell you that the jump is higher at the top than it appears from your boat.

Hanging Out at Chimney Rock

As a boater, you will find it enjoyable to just sit back and watch the fun. Many people drop by the iconic hang out spot to simply hang out, play music, and catch some sunrays on the boat.

It’s also a great place to pull out a float and swim with other fellow lake neighbors. Just to the left of Chimney Rock is a calmer area where many people will tie up boat to boat with mooring lines. It’s a great way to meet other people on the lake and take a long, relaxing dip in the water.

Hanging out at Chimney Rock is quite an experience. If you are seeking to add a unique little thrill to your day on Lake Martin, Chimney Rock should be at the top of your bucket list!

Where Is Chimney Rock? 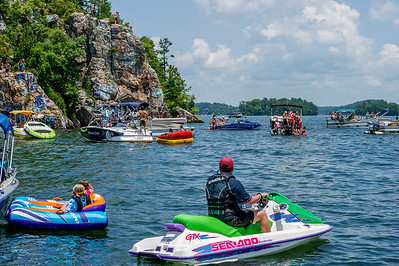 Chimney Rock is located on the southern end of Lake Martin near the Ridge Marina.  Download a map of the lake here to find your way there. 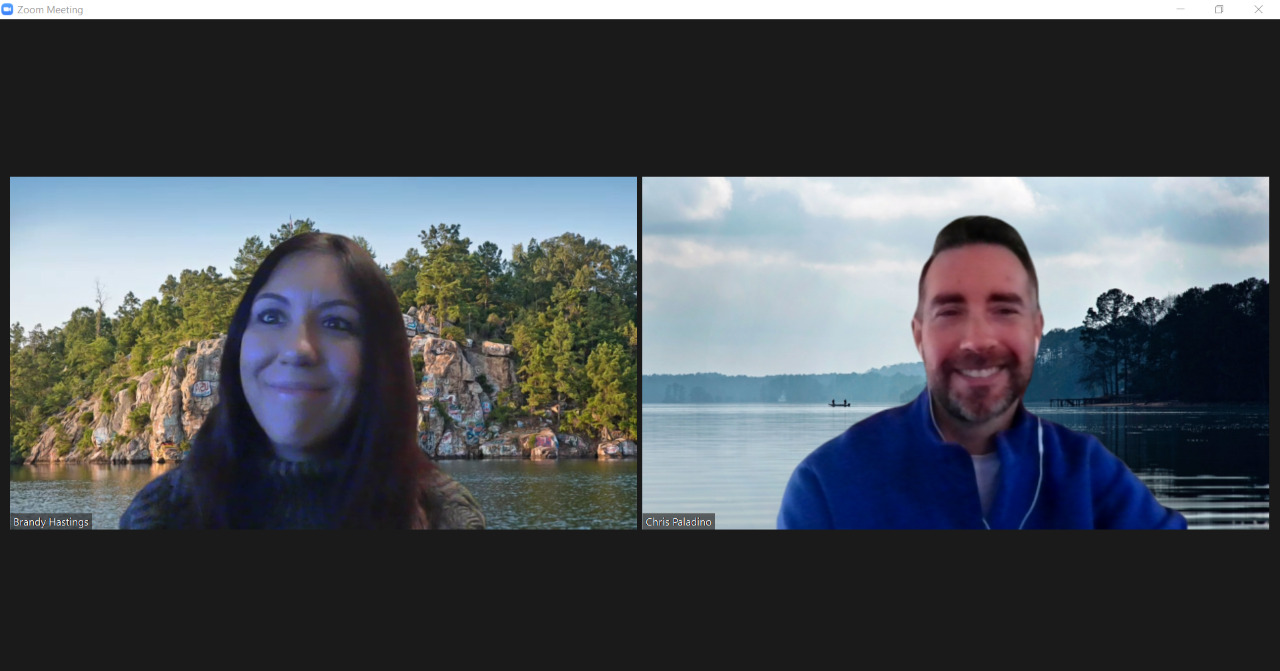 Chimney Rock is one of the most unique landmarks on Lake Martin, so it is only fitting that it is one of our free virtual backgrounds. Spice up your next Zoom meeting-and wow your colleagues with the iconic Chimney Rock in the background. You can also download free wallpaper for your desktop or phone.