If you’re a Game of Thrones fan, you’ve heard the phrase, “Winter is Coming.” Well, winter is here, and at Lake Martin, that is a good thing! It has brought with it a playground full of fun for us self-proclaimed adventurers and explorers.

It’s no secret that we in Lake Martin live for those summer days on the lake. We love feeling that warm sun on our skin, and whether we are wakeboarding, skiing, boating, catching Friday on the Green at Russell Crossroads, chilling on the beach at Wind Creek State Park, or just hanging out at one of our favorite lakeside places sipping on a cold Bushwacker, summertime at Lake Martin is like no other place. If I was a betting woman, I would bet that most around here would tell you that summer was their favorite time of year. Today though, I speak in defense of one of my favorite seasons. I want to tell you why winter at the lake is so special-and why this winter holds special significance.

The one big change that happens on the lake in the fall/winter is the lowering of the water level. You can read more about that here. Most years, Alabama Power lowers the lake 7 feet, but every 6 years, they lower the water level an additional 3 feet. This year is that special year, and currently, the water level is 10 feet below what it is during the summer. This means that those with lakefront property can do work on their docks and seawalls, but it also lends a little treat to us explorers.

One of my favorite people that I have had the opportunity to do some exploring with is Mr. Harold Banks. You have probably heard that name before, as he is the namesake of the Harold Banks Canoe Trail.  In 2009, he became the first person to solo paddle the entire 258 miles of the Tallapoosa River from its origins in Paulding County, Georgia, to its end at Fort Toulouse near Wetumpka, Alabama. In 2015, the 25 mile stretch located in Tallapoosa and Chambers counties was named in his honor. Paddling that trail is an adventure in itself and you can learn more about that here.

Although Harold is probably most widely known for that paddling voyage in his little red canoe, he is a man of many adventures. When we were on one of those adventures last summer, I remember him telling me of the special significance of this winter. Knowing I am one that loves picking up rocks along my path and seeing the unique formations that can only be found in central Alabama, he explained to me the treasures that we would find as the water level started dropping. I’m not talking about lost treasure chests around Pirate Island, although that is actually a real place on Lake Martin. I’m also not talking about the lost diamond rings that Susie lost while skiing, although with the water level lower, those kinds of treasures exist also. It’s definitely the best time to take out the metal detector or go magnet fishing. The treasures that Harold explained to me are the things that us explorers appreciate most-new trails for us to hike and exposed geologic wonders that are usually hidden beneath the waters of Lake Martin. I couldn’t keep this all to myself, so I wanted to share two of this favorite things about this time of year. 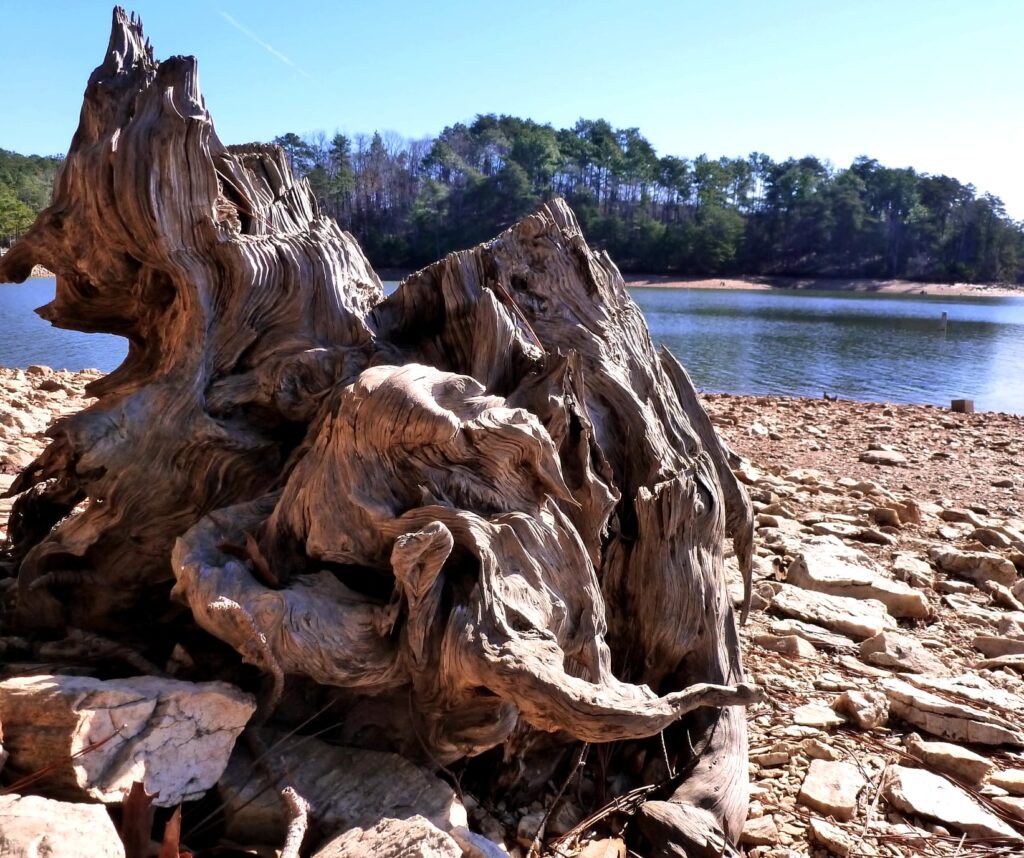 Smith Mountain hiking trails are maintained by the Cherokee Ridge Alpine Trail Association, and are a great place to access the exposed shoreline. You can hike the Lakeshore Trail that hugs pristine, still wild shoreline, until you come to the Island Hop Trail which crosses land bridges to 4 islands that are accessible only during the low winter pool.  The entire exposed lakeshore opens up many miles of walking possibilities to explore nature. You can look for unusual pieces of driftwood, hunt for arrowheads, and find freshwater mussels as big as your hand. 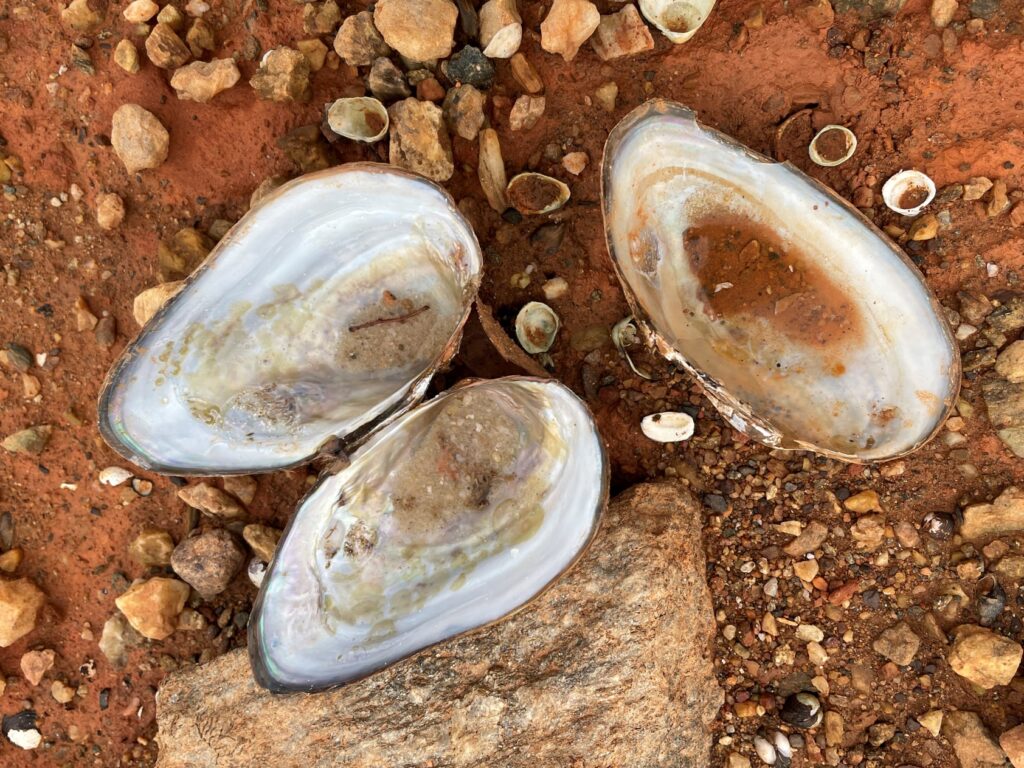 Take advantage of these special trails while you can though, because once the water starts rising in the spring, you won’t be able to access them until the following winter. And don’t forget, it will be another 6 years before you can explore them to the extent you can right this second. And as a bonus, hiking any of the trails at Smith Mountain also counts toward your completion of the Lake Martin Hiking Challenge.

Explore The Geology Of The Lake Martin Area 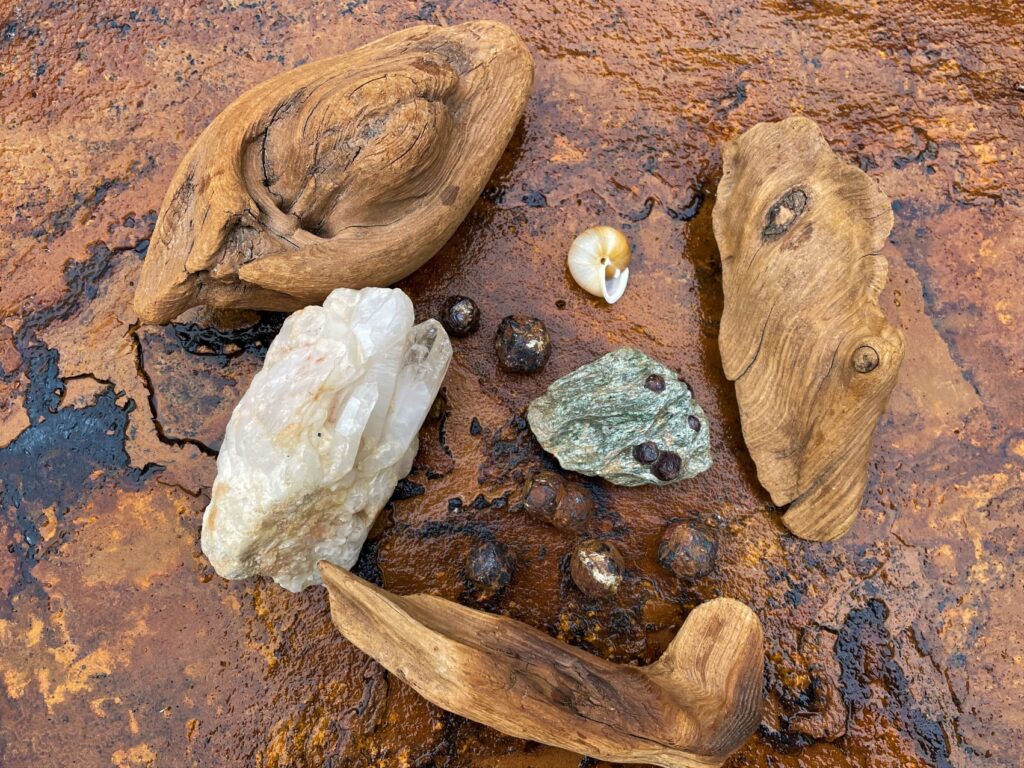 Collecting pretty rocks is another great activity during the winter months at Lake Martin. Even during the summer, I am one of those people that gets overly fascinated with the geological finds in the area. Every time I get ready for a hike and go to pick up my hiking bag, I wonder why it is so heavy…. until I open it up and remember all of the great finds I found on the previous voyage. While the water is down, you are able to uncover even more great treasures.

Did you know that Tallapoosa County is nationally known as a rockhound super site because of the abundance and diversity of minerals? 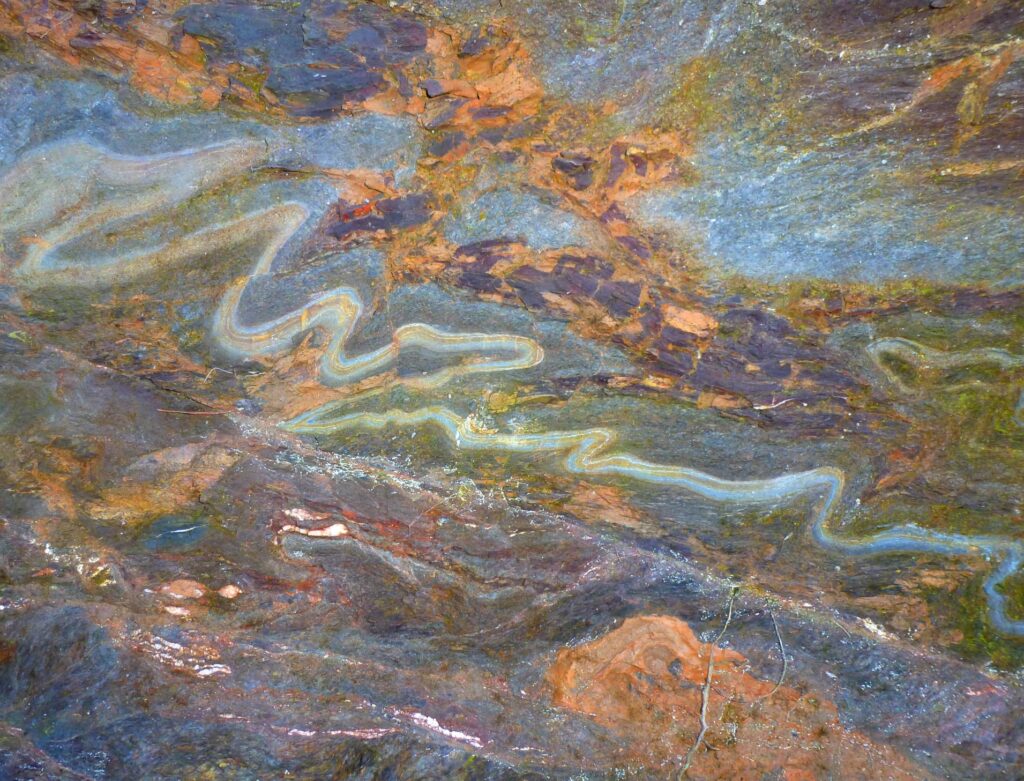 This area has seen violent geologic upheaval. To oversimplify, the Lake Martin area lies along a line where the ancestral continents to Africa and North America once collided, then split apart. Extensive volcanic activity and massive earthquakes reshaped the earth. Three parallel fault lines still pass right through the Lake Martin area. 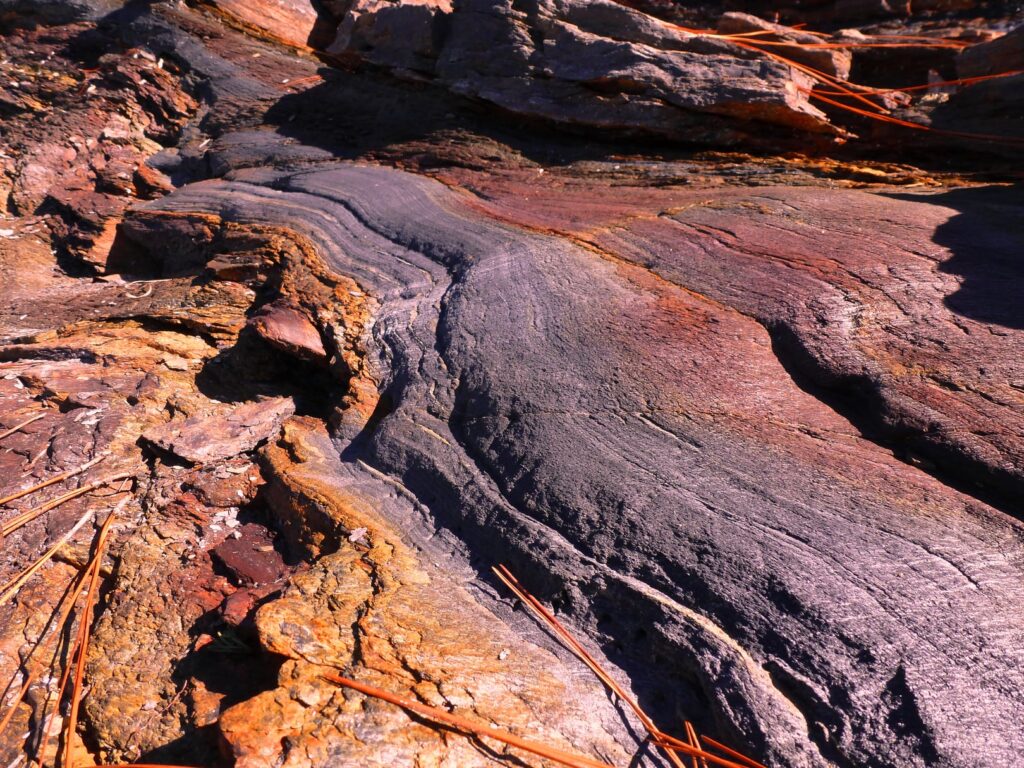 Layers of rock have been twisted and folded over to create complexity seen few other places. You must peel back the vegetation and topsoil to reveal this complicated geology, and the receding waters of Lake Martin expose where that occurred. Harold told me he has found garnets bigger than marbles laying on top of the ground. He also says he has found smaller gem quality garnets embedded in schist, large sheets of mica, and quartz crystals. There are some areas where the patterns and colors of exposed rock resemble abstract art masterpieces, and it is hard to fathom that these scenes are natural. 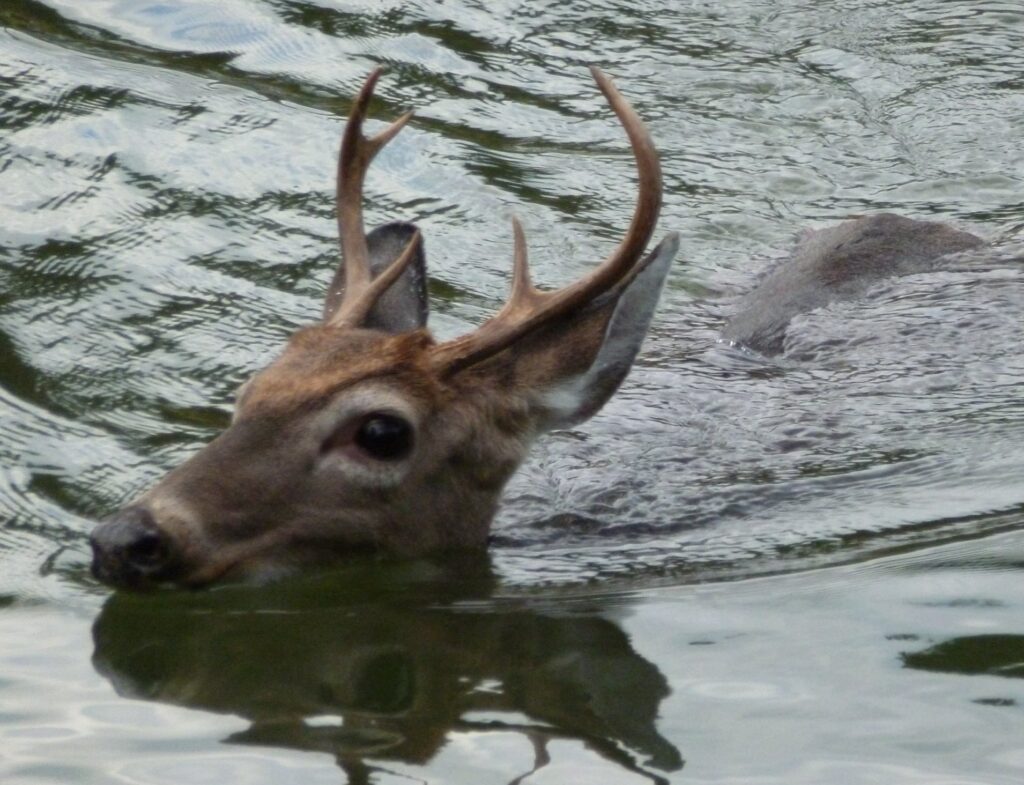 We have hundreds of miles of shoreline surrounding Lake Martin, and Harold says that you will find miracles of nature in every mile. Take it all in and enjoy it. You may even have an opportunity to get a glimpse of migratory waterfowl visiting from far away, see fox squirrels and turkeys, or even catch a deer swimming across a narrow, shallow channel. His advice though is to get out there and just start walking. The water level will start rising on February 17th. It will rise slowly, and you can always keep up with the current water level here. Right now though, while the water level is at the lowest it will be for 6 years, it is absolutely the best time to be out there finding those unique treasures.

I would like to extend a special thanks to Mr. Harold Banks for his input in this article, and for his mentorship in exploring central Alabama.