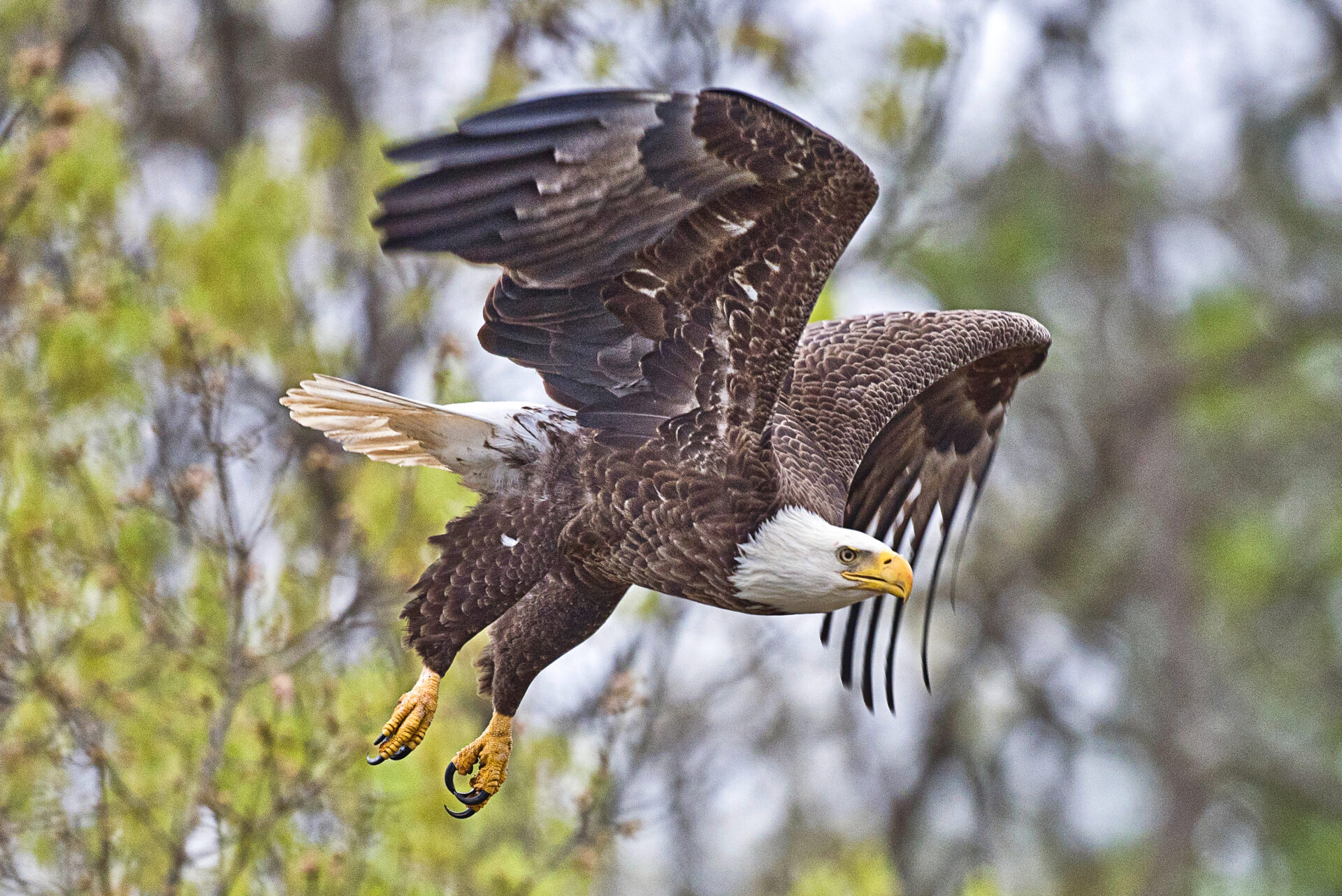 Everyone loves Lake Martin for their own reasons.  Most will tell you how awesome it is to be out on the water, whether on a boat, Sea Doo, or kayak.  We have almost 900 miles of shoreline, and there is plenty to see and do on the lake.  However, with all of the stops at the local lakeside bars and restaurants, hanging out with the music cranked up at Chimney Rock, and the focus on watersports and fishing, it can be easy to overlook one of my personal favorite things to do on the lake……. taking in the beauty of the Bald Eagles that call Lake Martin home. 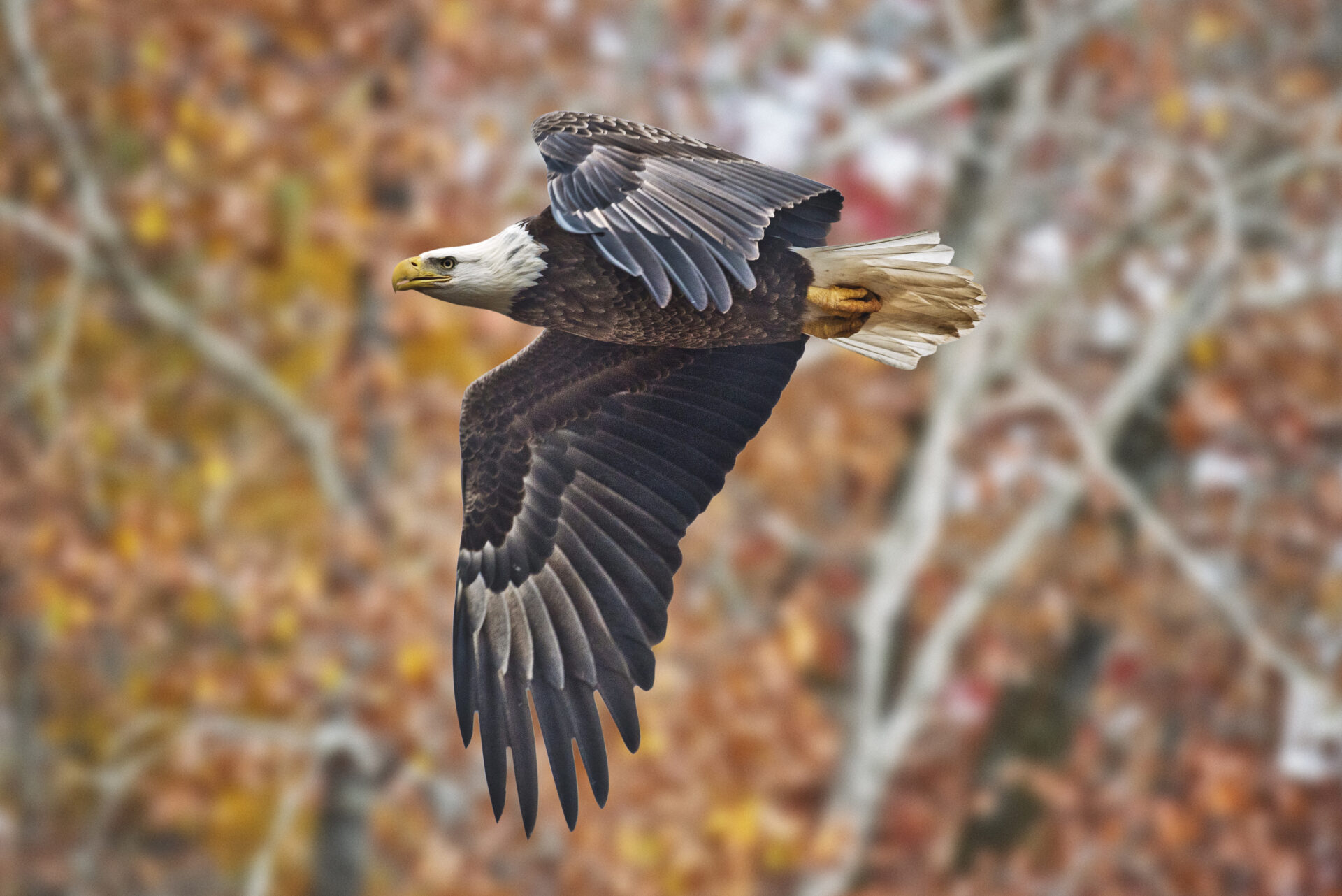 Bald Eagles are one of nature’s greatest comeback stories.  During the beginning of the 20th century, their numbers declined due to shooting and the effects of DDT and other pesticides.  However, the eagles were given full legal protection, DDT was banned, and it made a significant difference.  Once listed on the endangered species list, they were removed from the list in 2007.  Alabama Audubon says that the population appears to have continually increased since delisting, but the population is still below historic numbers.  However, one thing we do know is that Bald Eagles love visiting Lake Martin and making it their home.  We have both eagle residents who take permanent residence, and we also have ones that show up for the winter.  Even the Bald Eagles realize how awesome Lake Martin is to visit!  This is actually a great place to see many birds, as the Piedmont Plateau Birding Trail has many stops in our area.

Bald Eagles Right Outside My Door 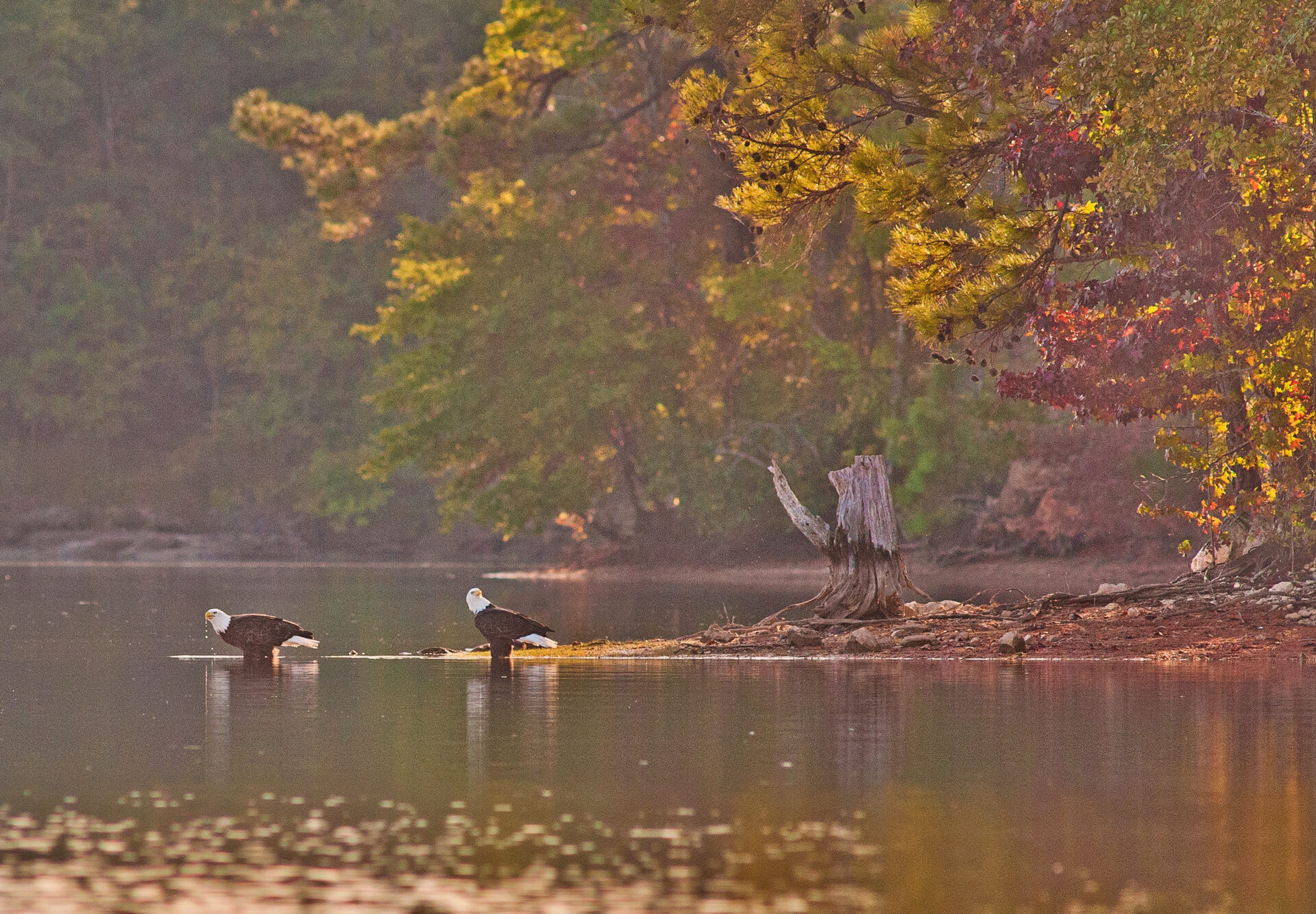 I will admit, there have been so many times that I have been on the lake and didn’t realize what was just above me.  That all changed the day that my friend, John Denney, and I went out eagle watching.  He grew up in the area and has been photographing them for years, so I felt confident that if anyone was going to show me an eagle, it would be him.  Departing from my lakeside home by kayaks, we went to the first slough by my home, and saw our first pair of eagles.  I couldn’t believe it-they had been there all along, that close to me, and I didn’t even realize it!  It was a great lesson to me to slow down, be quiet,  and be aware of my surroundings.  We are so accustomed to being in a hurry these days that it is sometimes hard to just slow down and take it all in.  That’s necessary though to be able to acknowledge and appreciate all of the cool things that are happening around us that often get missed.  Of course, after seeing that first pair of eagles, I was hooked!  That certainly was not the last time we went out eagle watching, and on our record day, which was just a couple of hours out on the north end of the lake, we spotted a total of 6 different Bald Eagles-not a bad day of birdwatching in my book!

How to Spot a Bald Eagle at Lake Martin 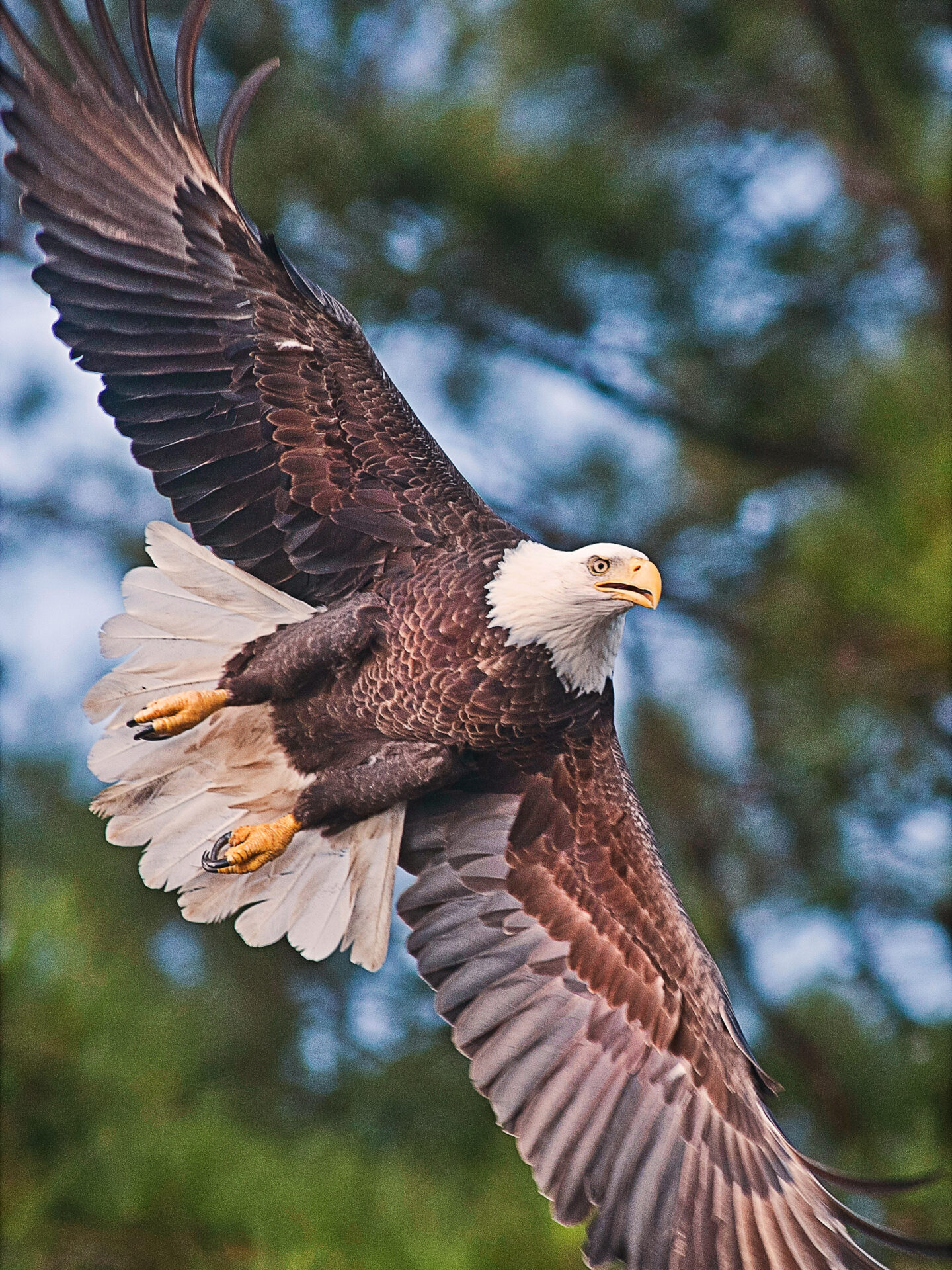 I still consider myself a beginner Bald Eagle spotter, but the first thing I look for is the white head.  That can be a little tricky if they are in flight, but when they are perched in a tree, if you are looking closely, you can often see the white stand out against the green of the foliage that surrounds them.  The adults are larger than a hawk, have a large hooked bill, yellow legs, and a dark brown body.  The white head and tail tend to be the most noticeable thing to me though.  However, if you just go by that recommendation alone, you are going to miss out on a lot of Bald Eagles.  One thing that I have learned since I started appreciating and watching these birds, is that the adults are the only ones that have white heads.  When they are first born, they are born with a dark head, and they slowly get more white showing up on their head as they age (kind of like me.)  While the white on my head took a little longer to form, a Bald Eagle typically has a fully white head by 4.5-5 years old.  As they age, the body feathers and tail also change, but the head is the most noticeable aspect that people see first.  There are great resources available online to help you estimate the age of a Bald Eagle. 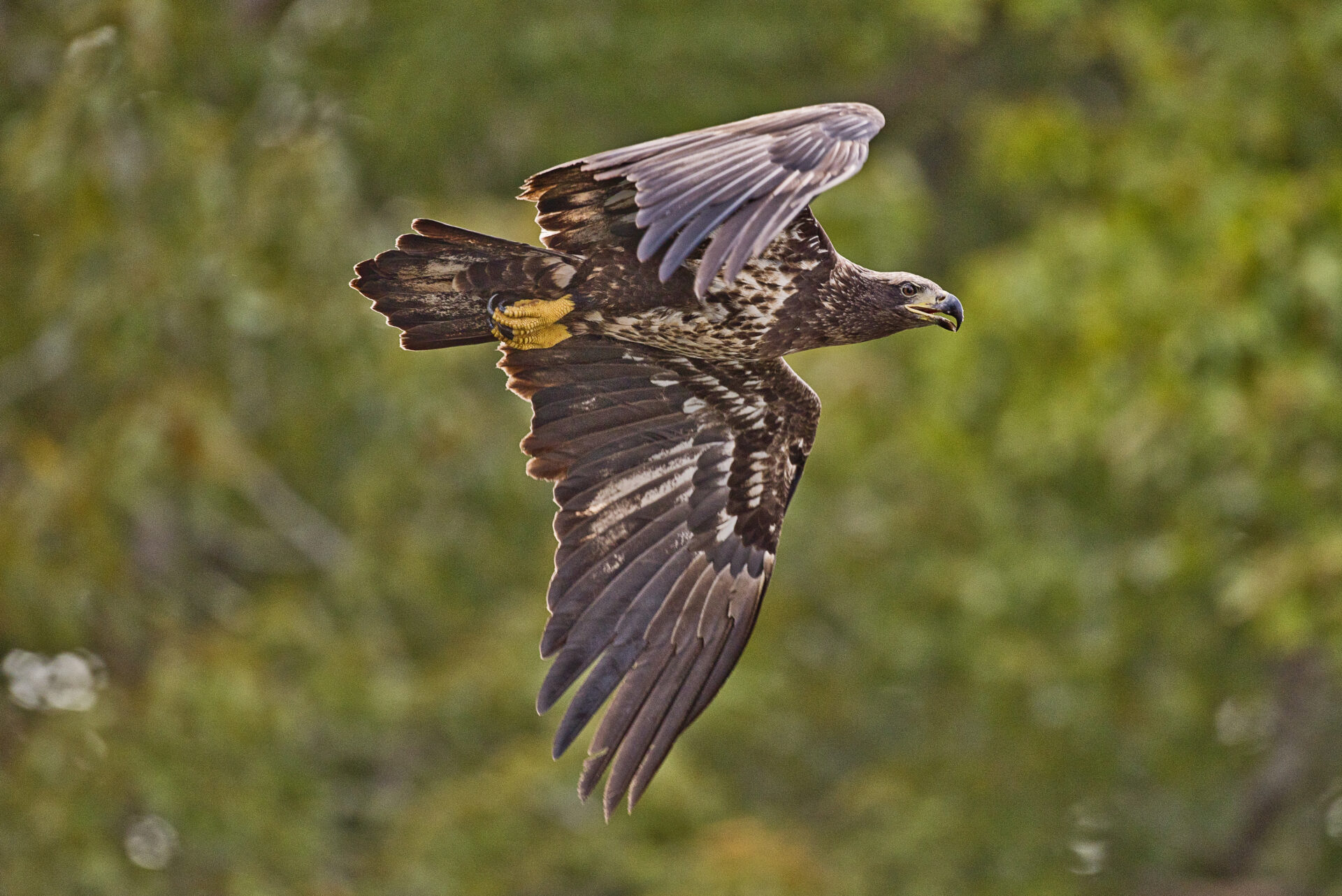 More senses come into play when birdwatching.  While you should visually be on the lookout, Bald Eagles can also be spotted by their strange squeaky cackling.  The National Audubon Society has audio of their calls available on their website.  The Merlin app is also a great tool for indentifying bird sounds.  It can be helpful to give the recorded sounds a listen before heading out on your eagle watching adventure.  This will help you to know what to listen for, as you will often hear them before you see them. 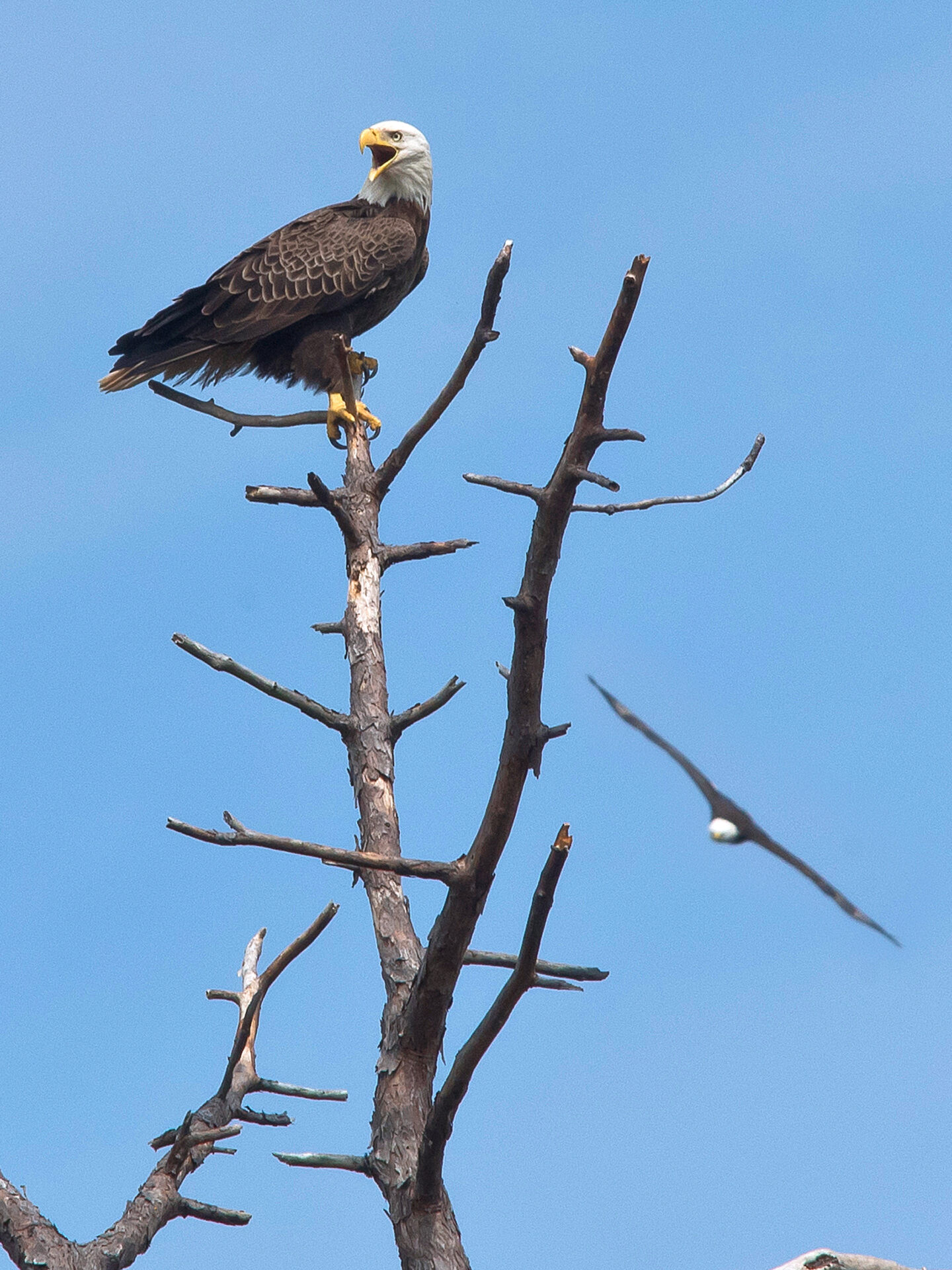 In nature, it is impossible to give exact locations of Bald Eagles.  However, just like those of us that love the lake life, so do they.  Bald Eagles love fishing, and I guess they too have heard about the great fishing on Lake Martin.  If you are on the lake, or even the Tallapoosa River, you have a very good chance of spotting one, or two.  Maybe you will even get as lucky as us and spot six in a day!  One thing I have noticed is that when they find a spot they like, they tend to hang out for awhile.  That pair we spotted by my house seems to have taken residence there, and are seen quite frequently in that same slough.  So if you do spot a Bald Eagle, it doesn’t hurt to revisit the same spot to try to see them again.

If You Do See a Bald Eagle 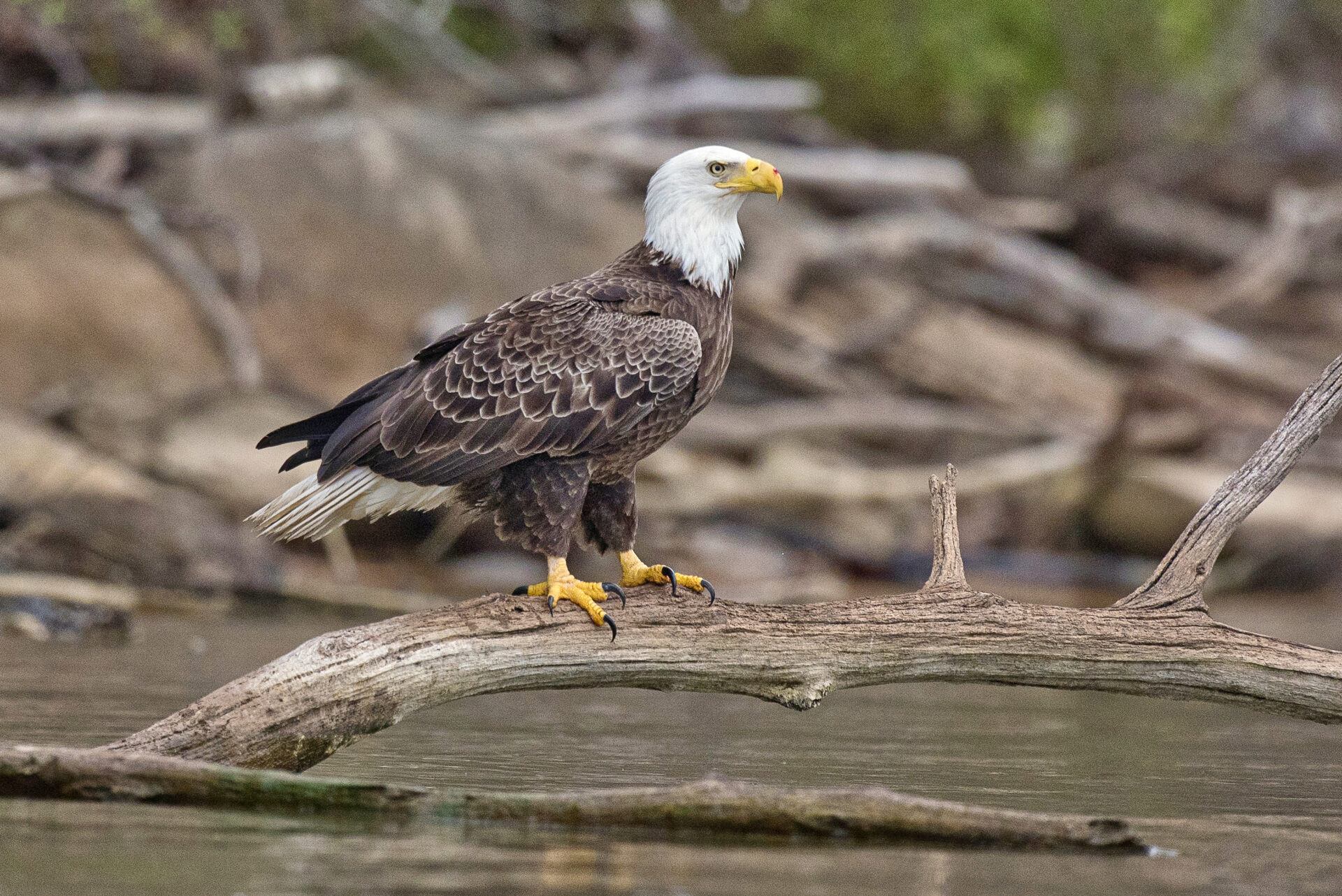 When you see a Bald Eagle, just give them their space and don’t disturb them.  However, you should consider yourself a very blessed person when that moment happens-I can’t even describe that awestruck feeling.  The magnificence and beauty are just amazing, and since they are our national bird, there is also a sense of patriotism that is also felt.  Maybe you have seen them in a zoo or bird refuge, but there is a very special sentiment that is felt when seeing them in nature-especially knowing they were on the verge of being gone not that long ago.  The next time you are on the lake, I challenge you to slow down, be silent, look up, and take it all in.  There is a whole other world above you, and around our parts, you have a good chance at spotting a bald eagle on Lake Martin by just doing those four things.

For more tips on birdwatching, check out:  How to Get Started Birding 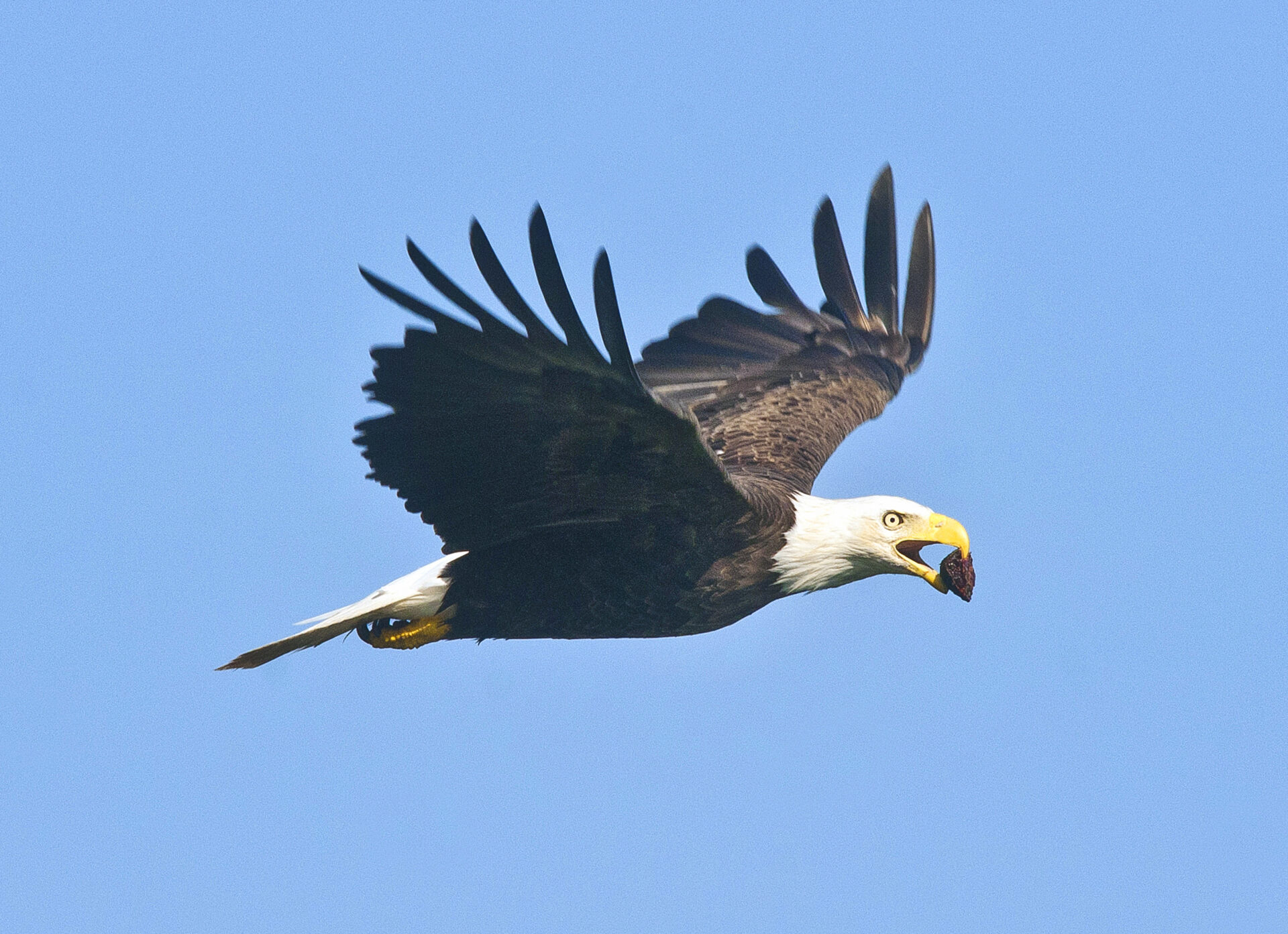