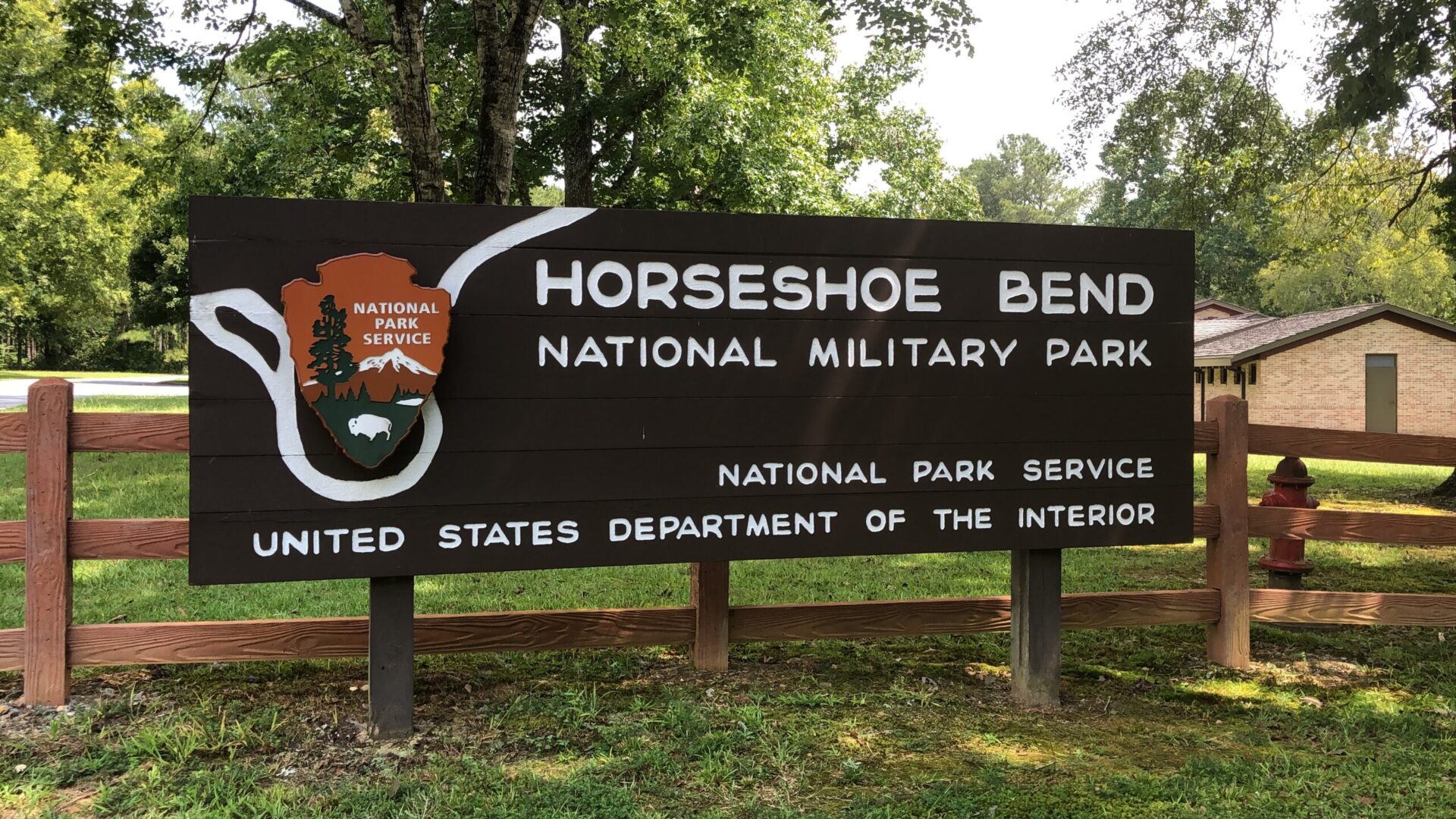 Horseshoe Bend National Military Park is an iconic landmark in the state of Alabama.  Located approximately 20 minutes from both the city of Dadeville and the heart of Downtown Alexander City, this 2,040-acre land is home to one of the most influential battles in American history.  Not only was it the final battle of the Creek War, it also ultimately resulted in the United States government obtaining over 23 million acres of land through the signing of the Treaty of Fort Jackson in 1814.  This land would later create a majority of the state of Alabama and portions of the state of Georgia- and kick off our country’s westward expansion.  It was also the deadliest clash with Native Americans in our country’s history, resulting in over 800 Creek Indians perishing that fatal day.

Today, this battlefield is utilized as an immersive learning experience where guests can walk amongst the historical battle sites as well as tour the commemorative museum. This Park is free for all guests, making it the perfect way to spend a day indulged in one of the most epic events in American history. 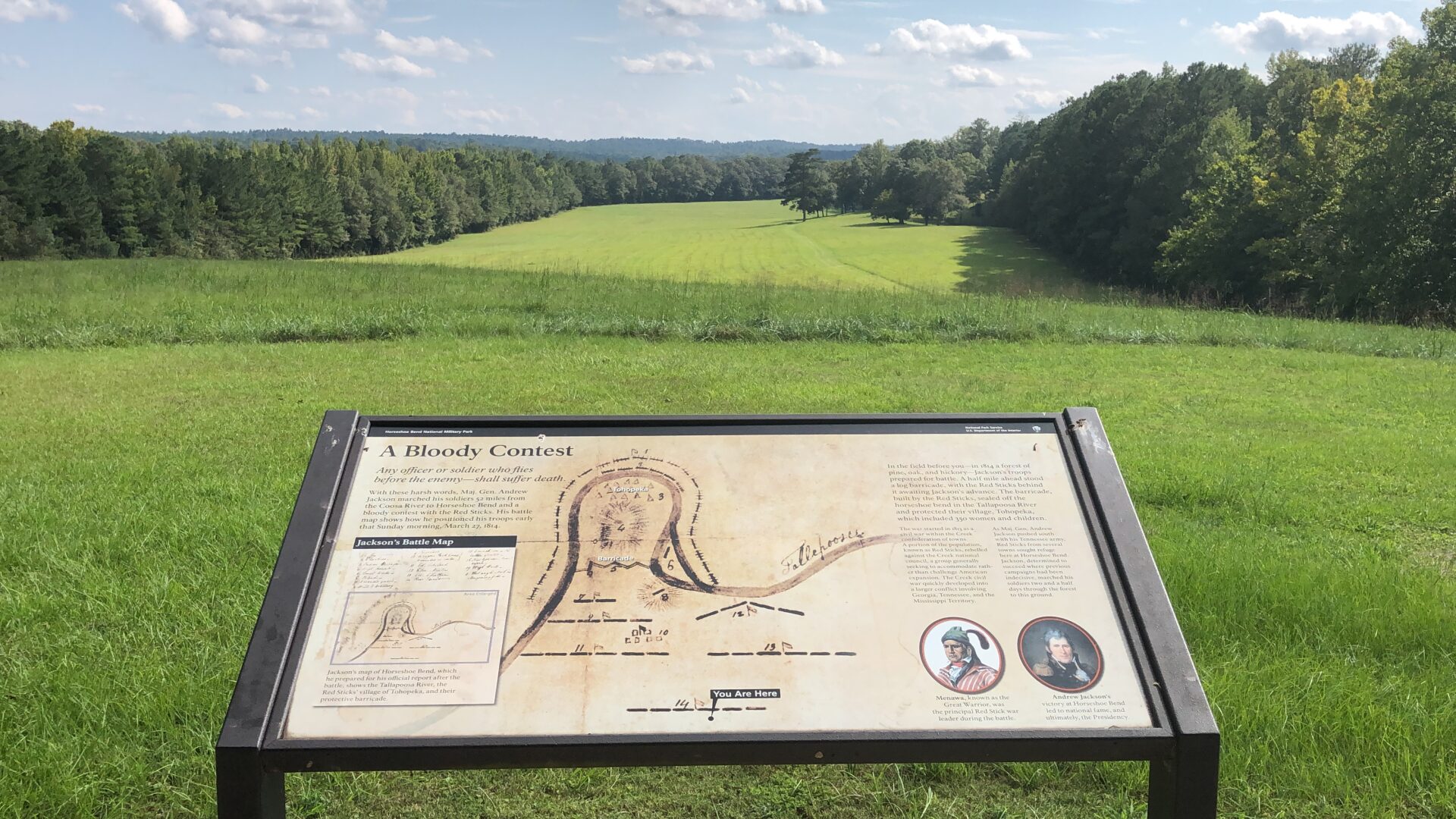 This historic landmark was originally called “Cholocco Litabixbee” by the Creek Indians, meaning “Horse’s Flat Foot.” It was a description of the way the Tallapoosa River wrapped around the peninsula of land where the temporary Creek Indian village of Tohopeka was built.

In March of 1814, General Andrew Jackson led an army of approximately 3,300 men, including allied Cherokee and Lower Creek Indians, to cross the Tallapoosa River and surround the peninsula of Horseshoe Bend.  He was met with force by opposing Upper Creek Indians, also known as the “Red Sticks”, who held their ground behind a strong barricade made of dirt and pine logs while the women and children sought shelter at their nearby Tohopeka Village. Here started one of the deadliest and most influential battles between indigenous people and US Troops in American history.

General Jackson attacked the barricade with artillery for hours to no avail.  It wasn’t until an allied Cherokee Indian by the name of Tu-qua, or “Whale”, swam across the creek and stole a canoe that the battle began to shift in Jackson’s favor.  Whale used the stolen canoe to shuttle other Cherokee Indians and soldiers across the river, creating an unexpected attack on the Red Sticks village from the rear.  The Cherokee Indians set fire to the Tohopeka Village, burning it to the ground and taking the women and children as prisoners. With the distraction of the burning village and General Jackson’s men overtaking the Red Stick’s second line of defense, the fate was ultimately sealed for the Creek warriors at the Battle of Horseshoe Bend. At least 800 of the 1,000 Creek Indians were slain in battle – the highest number of casualties of Native Americans clashing against US Troops in US history.

Today, we are fortunate enough to have this land to walk and commemorate the lives and events that took place all those years ago.  However, this almost wasn’t the case.  In the 1920s, the land was nearly flooded over when plans were made to build the dam and create Lake Martin.  However, local residents in the area worked tirelessly with Alabama Power to preserve this landmark and ensure Horseshoe Bend would not be affected by the flooding.  In August 1959, President Dwight D. Eisenhower signed the park’s proclamation, officially recognizing Horseshoe Bend as a National Park. 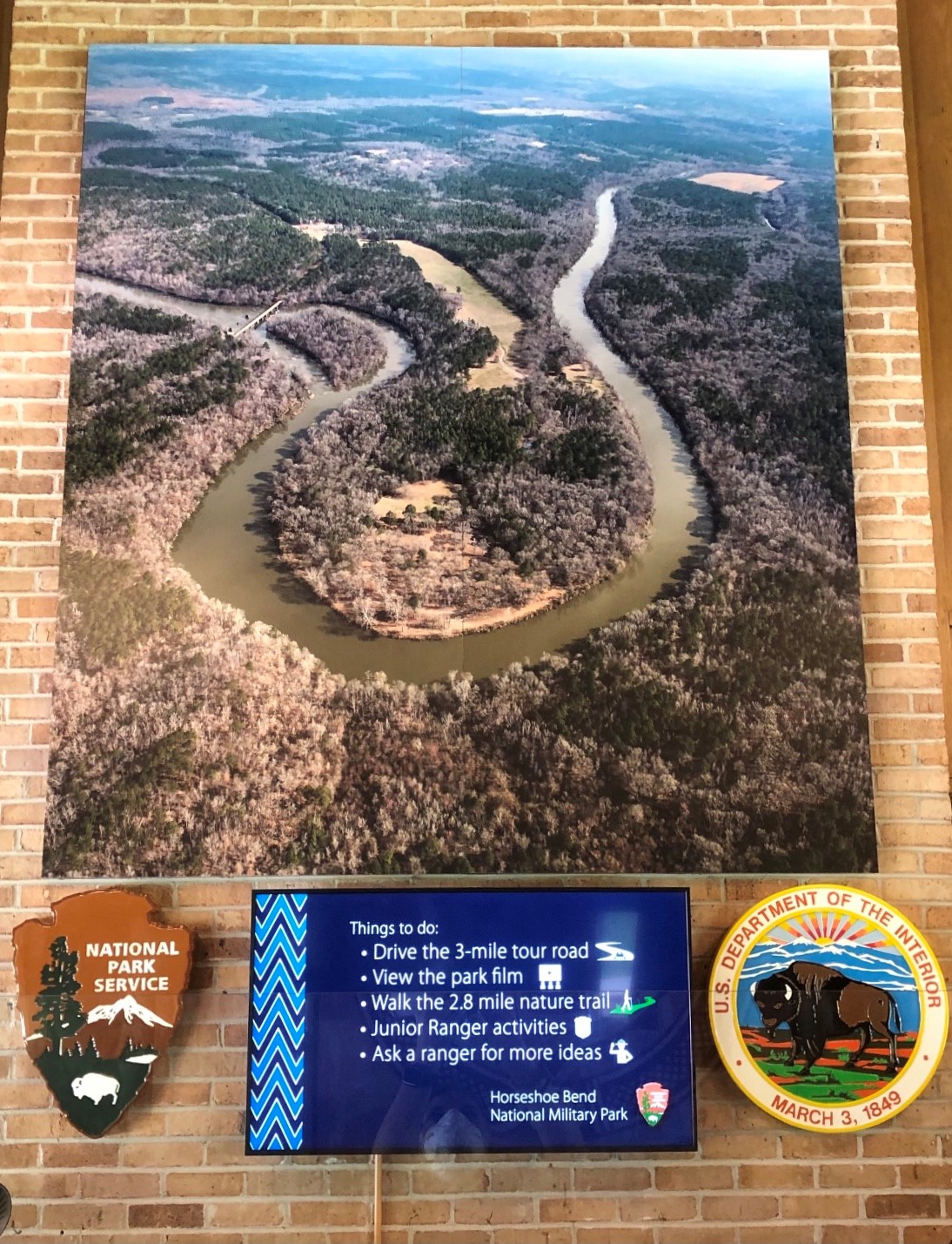 The Horseshoe Bend National Military Park is 2,040 acres in size so you may need some help planning your day.  Below is our roadmap to the park to ensure you experience everything that it has to offer! 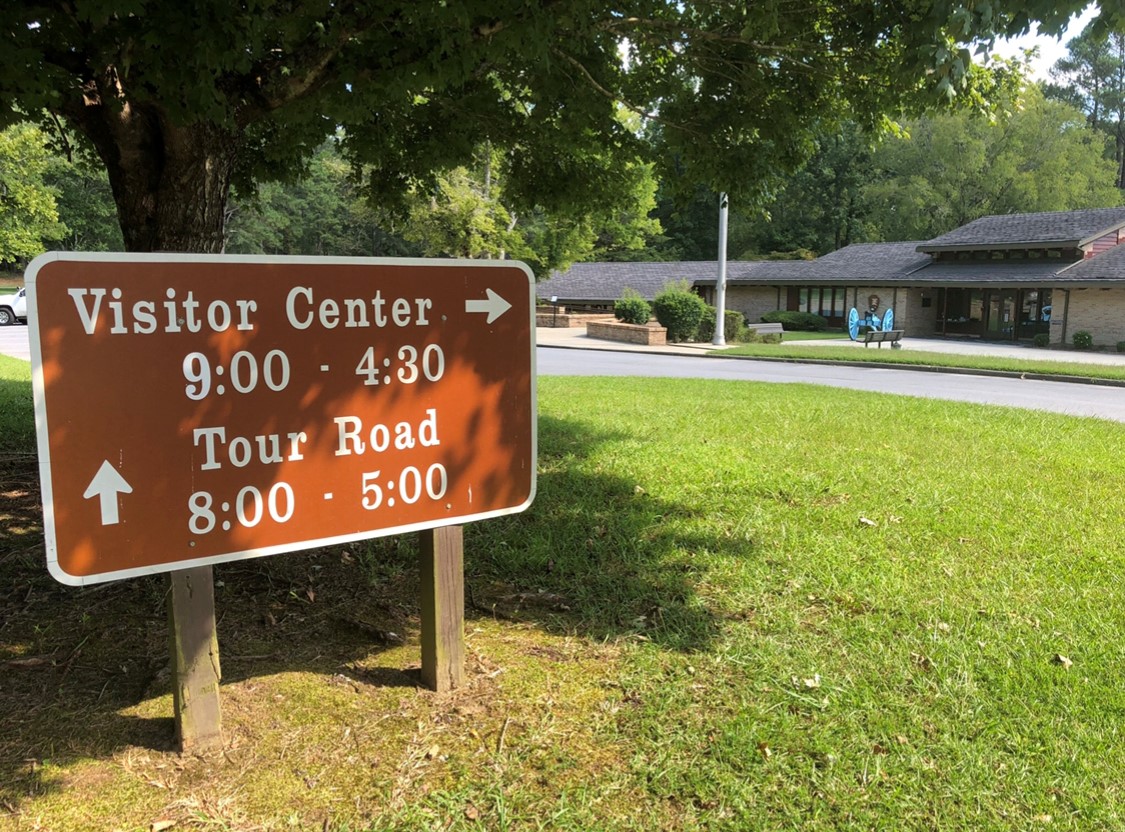 The Visitor’s Center is a key stop to enjoying your day at the park.  Located near the main parking lot, visitors can take a trip inside to grab a map of the guided tour stops, take a seat in the theatre to watch the feature film, and even walk through the newly renovated museum before hitting the battlefield sites. While here, don’t forget to grab yourself a souvenir to remember your day at this historical National Park!

It is highly recommended for first-time visitors to watch “the film”. With an approximate 23-minute run time, it simplifies the complex background of the Creek War and the events leading up to the Battle of Horseshoe Bend into an easy-to-follow storyline. Its purpose is to help visitors fully understand the weight of the history and battleground sites they are about to see. Guests can catch this film in the private theater located inside the Visitor’s Center. 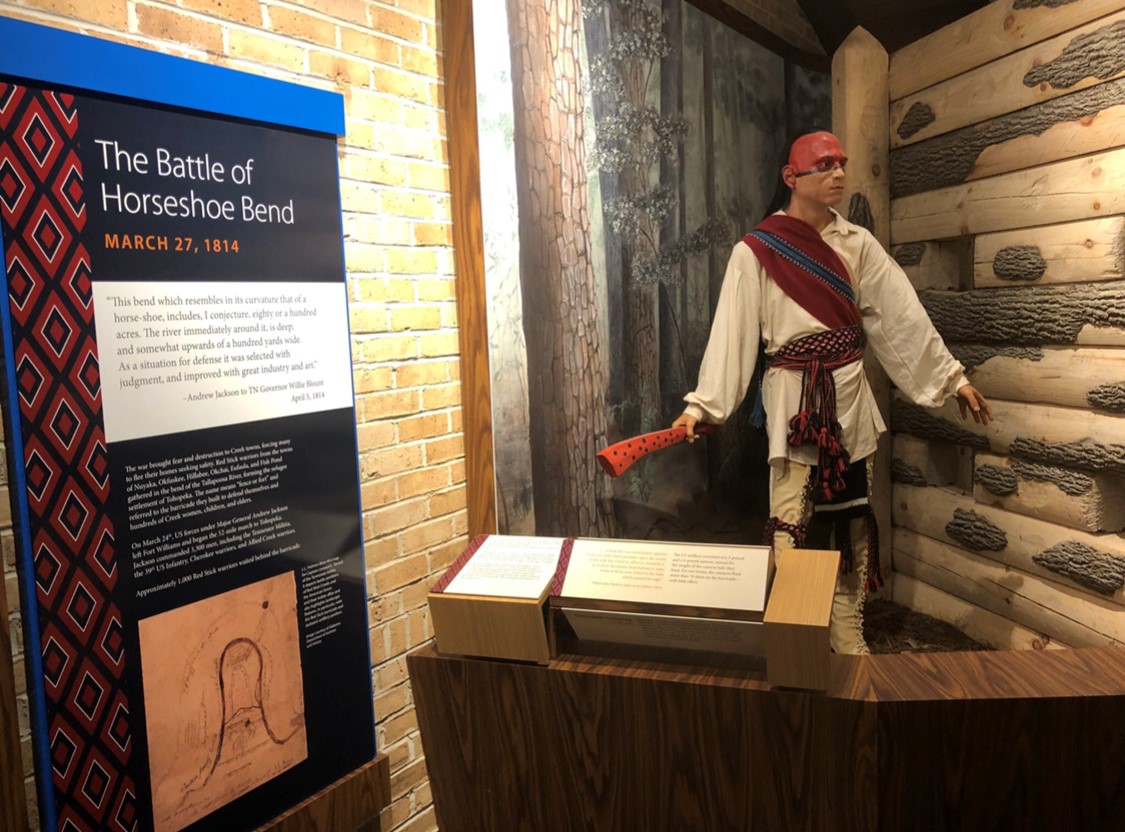 Walk through the newly renovated museum featuring dioramas of the Tohopeka Village, life-size Red Stick warriors and American soldiers, and detailed descriptions of the people and lifestyle of the Creek Indian nation.

The museum is filled with realistic replicas including a life-size canoe, turtle shell rattles commonly used in Creek Indian stomp dances, and even a rifle dedicated by U.S. President James Madison to commemorate the Cherokee Indian by the name of “Whale”.  Because of his role in the Battle of Horseshoe Bend, Whale was viewed as a courageous warrior and two rifles were made to honor him.

Before hitting the hiking trail or touring the grounds, visitors can enjoy lunch outdoors with a picnic at one of the two locations on site. Located directly across from the Visitor’s Center is the larger picnic area, consisting of covered pavilions and tables located throughout the designated site.  Charcoal grills and a trash receptacle are also available at this location.  The second designated picnic area is a smaller section near the Miller Covered Bridge boat ramp.  Picnicking is not permitted on the battlefield or the Tohopeka Village site. 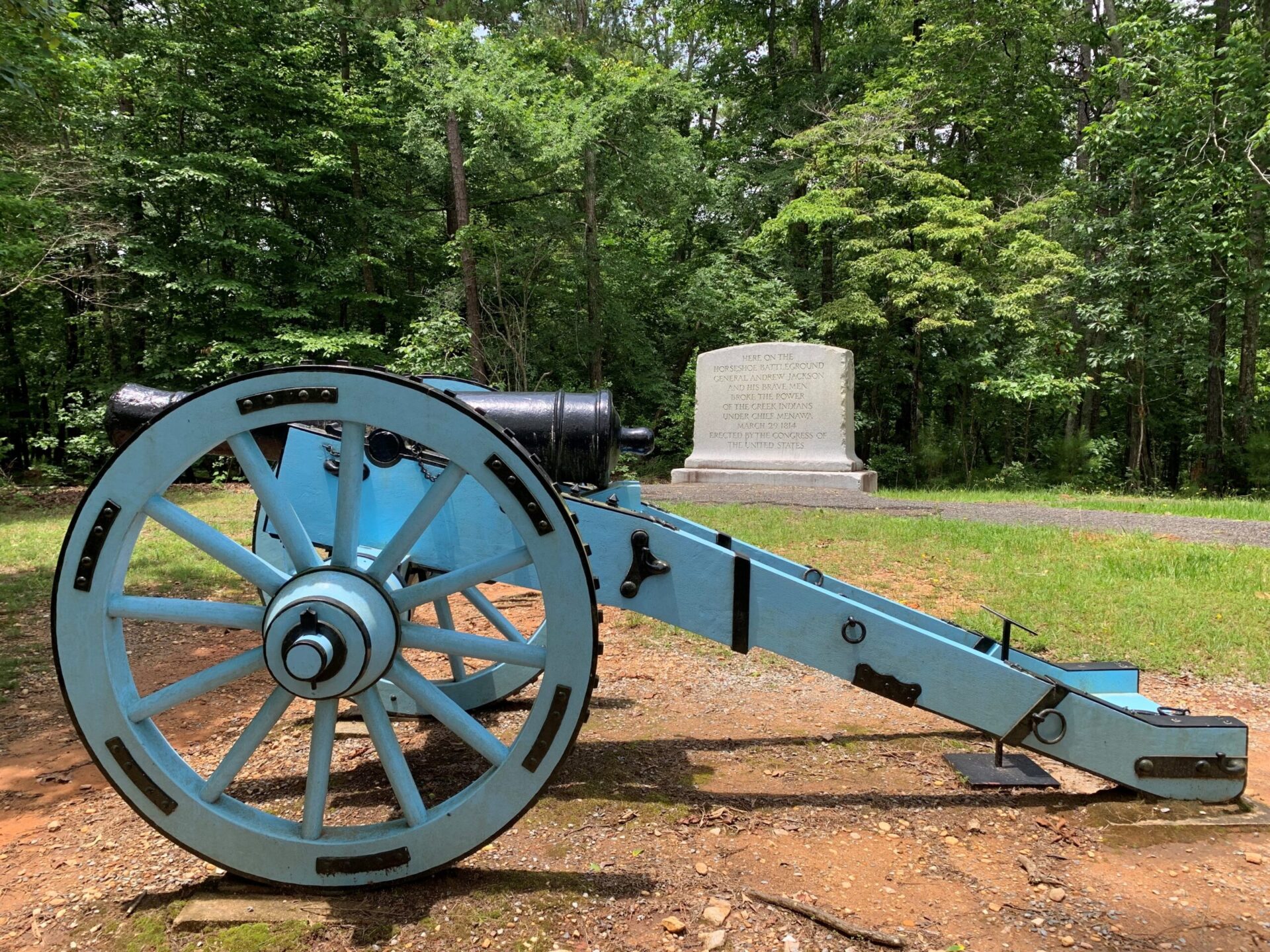 Horseshoe Bend National Military Park boasts a 2.8 mile long nature trail that intertwines throughout the Battlefield and near Tohopeka Village.  This trail is also a part of the Piedmont Plateau Birding Trail, giving hikers a great opportunity to see a variety of bird species throughout the year.  The trail at Horseshoe Bend National Military Park is also a part of the Lake Martin Hiking Challenge.  The route can be rigorous in some areas, so come prepared with comfortable shoes and hydration. 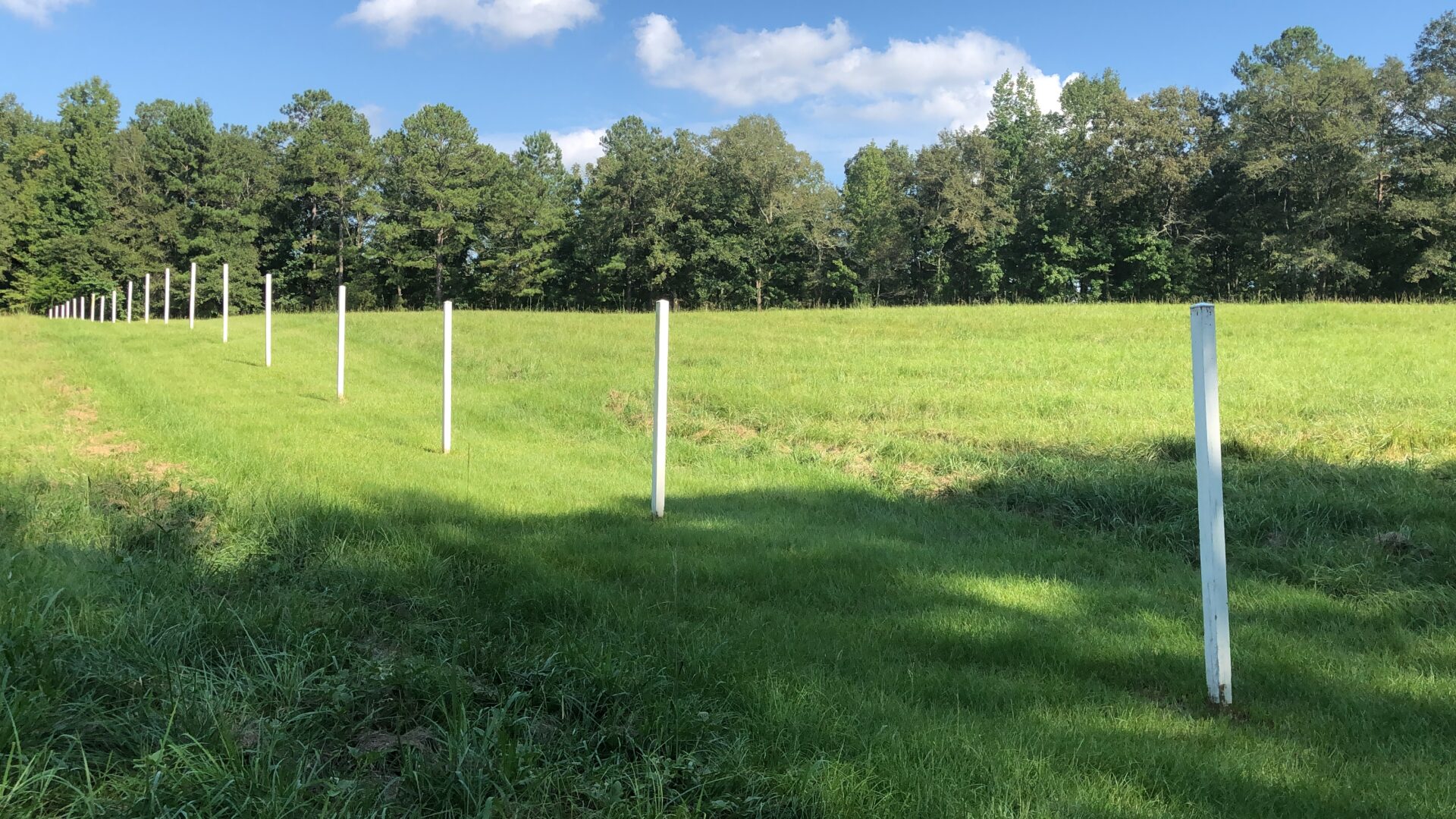 Perhaps the most popular way to experience Horseshoe Bend National Park is by driving the guided road tour. This 3-mile loop is designated as a commemorative route and takes visitors around the historic sites where the famous battle took place.

Each stopping point is easily spotted by a tour guide marker and consists of either a plaque or exhibit with descriptions of the site.  Each stop also has an interactive cell phone tour, consisting of a phone number that visitors can call to hear an in-depth voice recording and descriptive story of each location. Though most stops are easily accessible by pulling up in your vehicle, some do require taking a footpath to see the full exhibit.

The guided road tour stops include:

This is the first clearing with informational markers that visitors will see on the road tour. It is not technically a battle site, but rather the location where Andrew Jackson’s army first arrived on the scene. The hill itself is named “Cotton Patch Hill” and is very steep. Here, guests can see an image of General Andrew Jackson’s battle map as well as look down over the field where the famous barricade once stood, and the battle of Horseshoe Bend took place in the distance. Though there is a paved pathway to the top, visitors with disabilities may find it difficult to climb this hill and are encouraged to see the battlefield from Tour Stop 5 labeled on maps as “Newyaucau Town and the Aftermath”.

This is the first official stop on the driving tour.  In the distance, the Miller Covered Bridge can be seen where kayakers will often times drop in to paddle the Tallapoosa River, passing by what many refer to as “Bean’s Island”.  This 15-acre island is named after Lt. Jesse Bean, whose Tennessee militia stood post during the Battle of Horseshoe Bend to keep the Red Stick warriors from escaping and seeking refuge from the battle.

Here guests will see white fence posts lining across the field, representing what once was the famous Red Stick warrior barricade.  It was written by Andrew Jackson that the log breastwork was “eighty-poles in length, from five to eight feet high & of remarkable compactness and strength…” The 400-yard long barricade was made of dirt and pine logs, and was designed to protect their temporary village of Tohopeka.  It stood strong against Andrew Jackson’s army of cannonballs by absorbing them almost like a sponge.

At this stop guests can also walk up a small incline to “Gun Hill”, an exhibit where the artillery of General Andrew Jackson’s men once stood.  It is now represented by a light blue cannon and a monument erected by the Congress of the United States, commemorating the battleground.

Located in the “horseshoe” of the peninsula was the Creek village of Tohopeka.  The Red Sticks were hoping that the surrounding river would protect them from an attack.  However, at this location a Cherokee Indian by the name of Tu-qua, or “Whale”, stole a Creek canoe and helped Jackson’s militia and allied Cherokees cross the river and attack Tohopeka Village.  This stop is marked by two informative plaques, one marking where the Cherokee Indians crossed over in the stolen canoe and the second on the other side of the road, overlooking the field where the Tohopeka Village once stood.

Tohopeka was a temporary village for the Red Stick community, and it was here that the Creek women and children stayed during the battle. This location is also referred to as “The High Ground” and was originally intended to be used as a second line of defense by the Red Sticks. However, because of the stolen canoe, Cherokee Indians were able to cross the river and have access to this village from behind, thus burning it to the ground and creating a distraction from the barricade.  It is thought that the burning of the village may have been a crucial turning point of the battle.

A short trail from the parking area at this stop leads through the woods to an exhibit and clearing where visitors can look down from the high ground to where the village once stood.

Newyaucan Town and the Aftermath

This is the final stop on the road tour.  From here, visitors can see the battlefield and barricade while reflecting on the events that took place here at Horseshoe Bend. Our recommendation is to dial the informative number posted near the tour plaque.  It gives an in-depth conclusion and aftermath of the battle and what all unfolded from these events. This includes the signing of the Treaty of Fort Jackson where the Creek Nation had to cede 23 million acres of land to the United States, thus creating the state of Alabama and a large portion of the state of Georgia. In addition, Andrew Jackson was praised for his bravery and war tactics and was eventually elected the seventh President of the United States in 1829.

Take the park with you!  Download the National Park Services app and get all the information you need about Horseshoe Bend National Military Park at your fingertips.

Alabama is honored to be home to Horseshoe Bend National Military Park.  Be sure to add this to your next day trip bucket list.