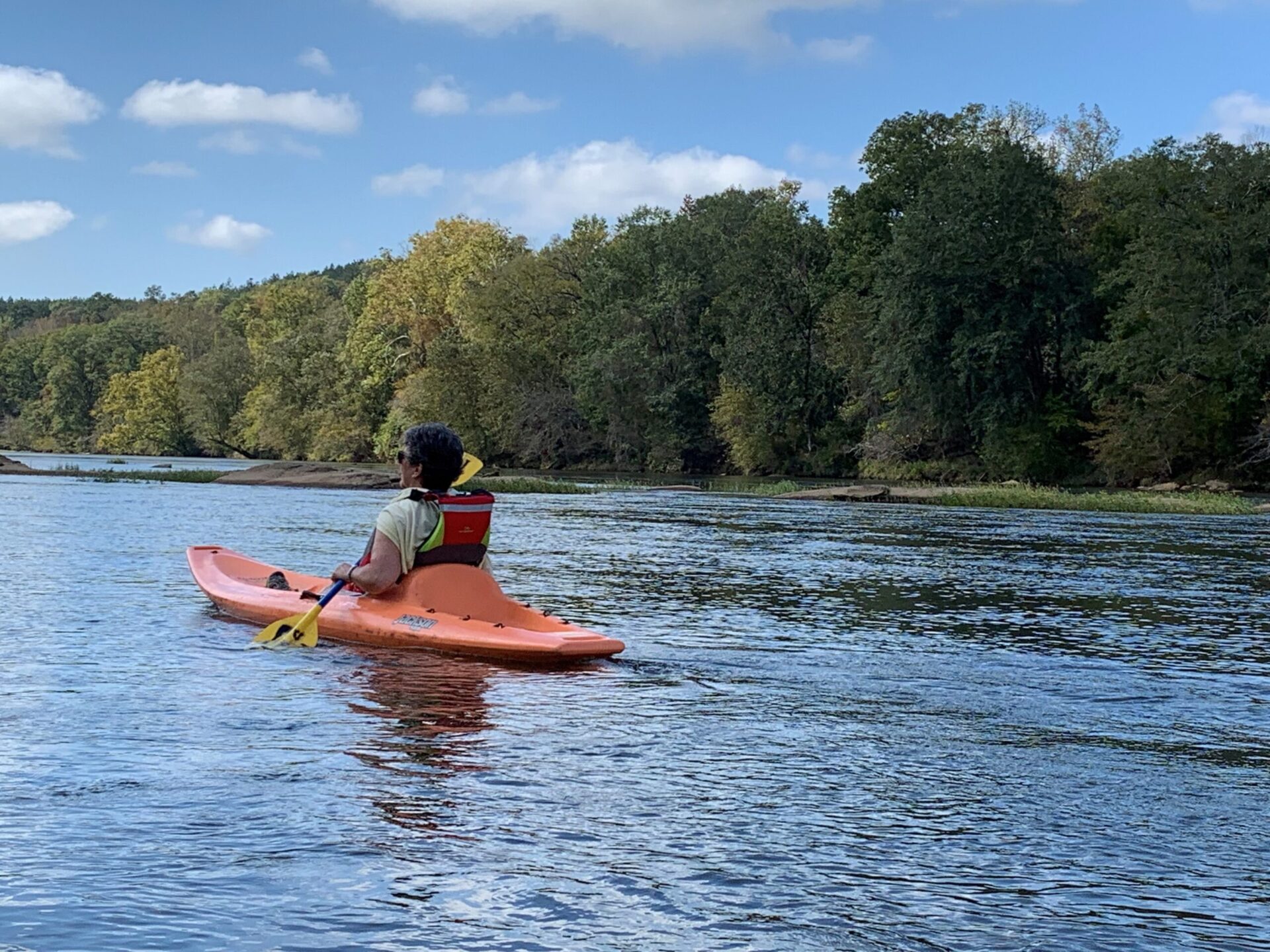 If you are looking to hit the water for an unforgettable adventure, kayaking the Tallapoosa River in Alabama is a must!

As a part of the Harold Banks Canoe Trail, the Tallapoosa River stretches over 265 miles, flowing from the southern end of the Appalachian Mountains of Georgia into the heart of foothills in southern Alabama. With sweeping views, the sounds of rushing water, and the vastly diverse wildlife, the Tallapoosa River is remarkably stunning from beginning to end.

Perhaps the most popular spot to kayak on the Tallapoosa River is what is referred to as “Section 3”.  Section 3 is one of five segments on the Harold Banks Canoe Trail along the Tallapoosa River that offers paddlers breathtaking scenic views and unique pit stops along the way.  It is not only great for beginners to “get their feet wet” so to speak, but its rich and diverse landscape also makes it enjoyable for the more experienced kayaker to relax and take in the scenery. 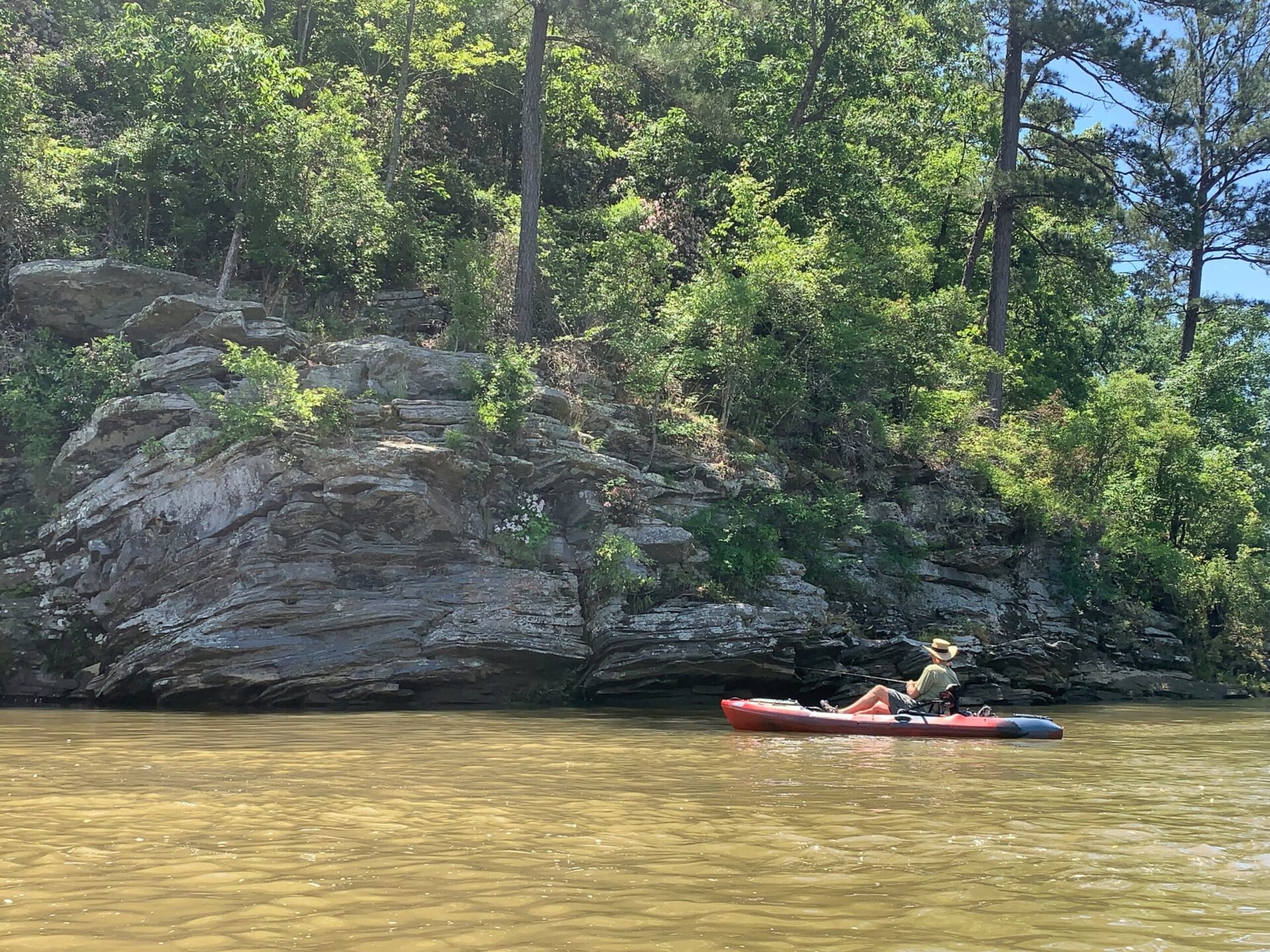 The drop-in point for Section 3 is at the historical Horseshoe Bend public access ramp and ends approximately 6 miles downstream at Jay Bird Landing.  The float is said to take anywhere from 2 to 4 hours, depending on experience level and the current speed of the river.  Kayakers are encouraged to check the “flow rate” speeds however before hoping in.  Favorable discharge rates are between 1,500 and 10,000 ft3/second.  You can check the daily Tallapoosa River flow rates here.

The float itself is peaceful and relaxing. It’s the perfect combination of flat water and shoals, which rarely ever reach above Class 1 on the international scale of river difficulty. However, kayakers should expect to get a little wet! Though it is a typically smooth ride, some of the shoals and rapids can provide a fun splash along the way. It is suggested for kayakers to stick to the left of the river for an easier ride, while more adventurous paddlers can take their chances along the right.

Along with stunning rock cliffs and forestry on either side of the banks, paddlers can expect to see a vast array of wildlife and foliage while kayaking this section.  Oftentimes kayakers can catch a bald eagle swooping in for a fish, or blue herons walking amongst the banks.  Turtles, fish, and even an occasional river snake can sometimes be spotted as well.

For our trip, my fiance Stephen and I connected with river guides from the local kayaking company. As we arrived for our trip, we parked our car at the end of a long, secluded dirt road that dead-ended into the public access at Jay Bird Landing. Here, our guides were already waiting with their shuttle van and our rental kayaks to bring us to our drop-in point. 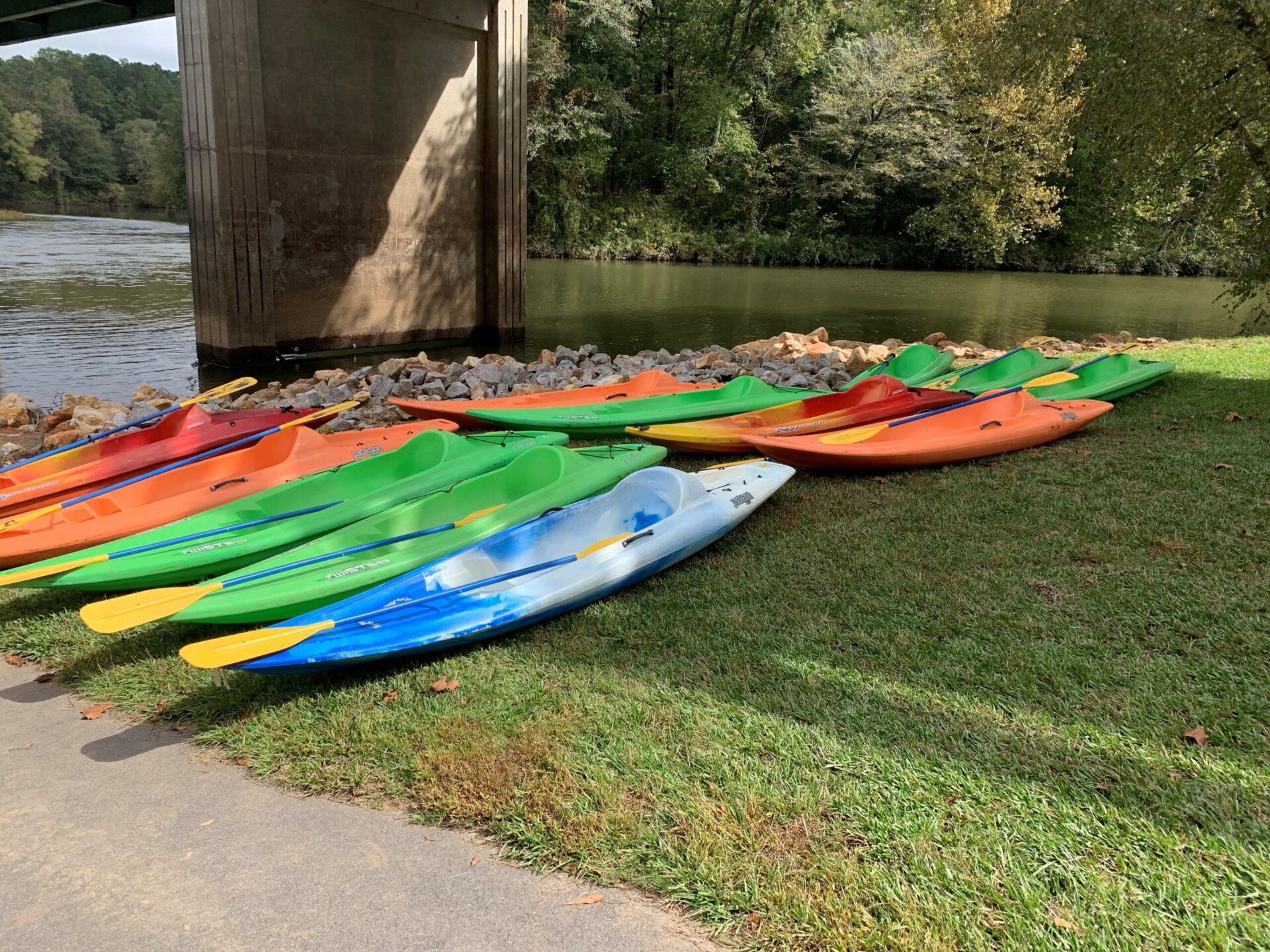 As we arrived at the Horseshoe Bend landing, several huge stone pillar structures in the water caught our eye. We learned that these were the reminisce of “Miller Covered Bridge”, once the longest covered bridge in Alabama and one of the longest bridges in the United States back in the early 1900s. It has since been reduced down to just simple, stone columns but is still quite an interesting piece of history to see.

As we popped our kayaks in and began down the river, the views from beginning to end are just simply breathtaking.  The sights change with every bend in the river, with rock formations and woods surrounding either side of the banks. Patches of thick greenery grow within the running water, where the rare aquatic flower called the Cahaba Lily is known to grow.  The flower is a part of the spider lily family and only grows in running water in Alabama, Georgia, South Carolina, and parts of North Carolina. These rare flowers usually only bloom between mid-May and mid-June.  Locals use the dates of “Mother’s Day” and “Father’s Day” as a rule of thumb for the best time to spot the Cahaba Lilies in full bloom.

There are also a few key points of interest kayakers can see while paddling the Tallapoosa River.

A little over a mile into your paddle from Horseshoe Bend, the first point of interest you come up to is referred to as “Peters Island” – another public access drop-in point into the Tallapoosa River. It is thought that it used to be a place where cotton was farmed back in the 1800s but now is inhabited by Black Walnut trees. The fascinating part about the island is the history behind the name still stays as somewhat of a mystery.

Just past Peters Island is another well-known spot referred to as “Laura’s Leap”.  It is a small cluster of rock formations that juts out just over the waters.  When the river is high enough, kayakers are known to make the short climb and the leap from the cliffs for a quick splash down into the river waters below.  If you time your trip just right, you can also catch a beautiful display of wildflowers surrounding Laura’s Leap called “Mountain Laurels”.  These beautiful white and pink flowers are known to put on a display beginning in the Spring months through to midsummer. They can be poisonous to animals however, so it is usually best to enjoy them from afar.

You may also notice while paddling Section 3 some of the unique makeshift campsites along the banks of the river. They are simple, small clearings made up of mismatched chairs and various furniture pieces with the occasional fire pit – and even a grill in one instance!  The areas are just big enough for perhaps 2 to 4 people to either post up for a quick break or even tie up a hammock and relax along the riverbank.  It is said that these little areas are in fact on private property but are made available to the occasional kayaker to catch a quick break.

For our trip however, Stephen and I opted for a pit stop at the “beach”.  It’s a small natural sand formation roughly halfway through the float and is the perfect place to stop for a quick swim in the river or even unpack a lunch and take in the incredible views. 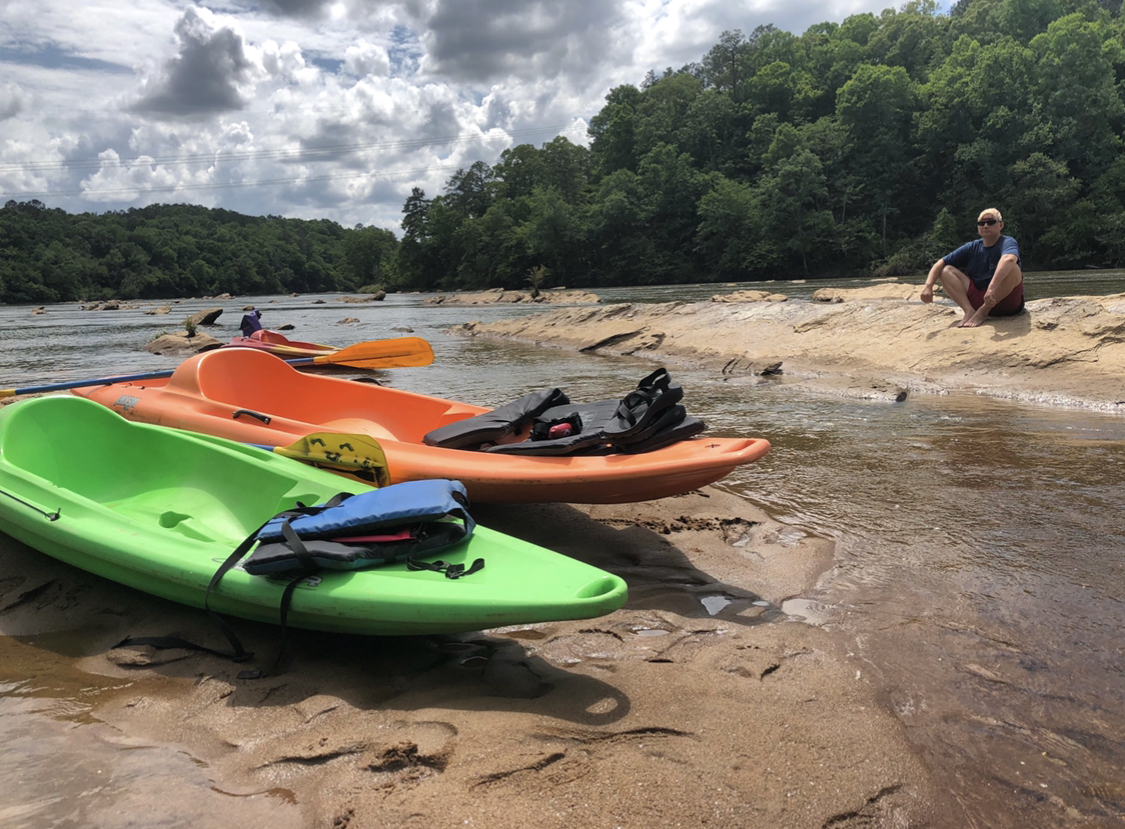 The second half of the trip is where it really starts to pick up the pace.  Kayakers are faced with the fastest rapids yet, some back-to-back.  Though they are not difficult to maneuver, they are sure to get your heart racing and put a little thrill into your trip! And don’t worry – if you find a few waves made their way into your kayak, there are several places to pull off and empty out the water before you are well on your way again!

The trip down Section 3 ends at Jay Bird Landing, just before the Tallapoosa River begins to feed into Lake Martin. It can be spotted by fishing banks and piers, and kayakers can paddle right up to the boat launch to pull out – bringing you full circle to where it all began.

From beginning to end, kayaking the Tallapoosa River is one of the most beautifully unique and scenic paddles Alabama has to offer. Do yourself a favor and make your paddle plans today – this is a trip you will never forget!

If you go, you may want to check out Tallapoosa Wilds or Float Alabama for rentals. You should also check out the Tallapoosa River Kayak Club . This is a great resource to chat with others who know the river well, ask questions, and find new friends to go paddling with.