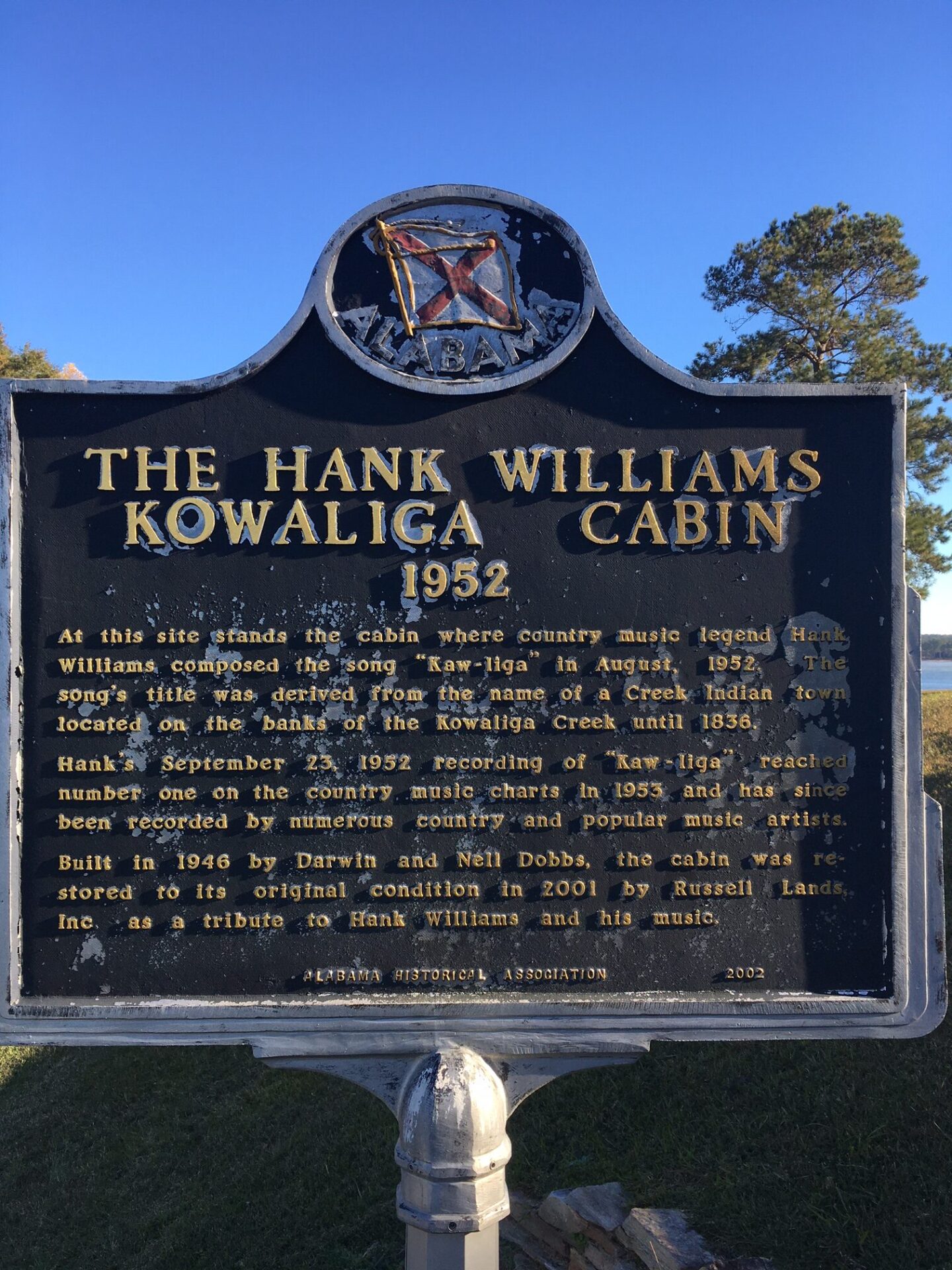 He’s the man, the myth, the legend.  He helped lay the foundation of country music as we know it today-and from the stories floating around, had a lot of fun doing it in the process……of course I’m talking about the one and only Hank Williams.

Did you know that not only was Hank one of the most talented musicians in history, but it turns out, he had pretty good taste in travel destinations too?  Hank and his girlfriend Bobbie Jett spent time at Lake Martin in the Summer of 1952-and spoiler alert, we do still have a chance for you to experience the area as he experienced it himself.  You don’t have to do everything he did while in town though-we do advise that you stay out of jail on your visit.  Yes-that really happened to him.

A local DJ, Bob McKinnon, was a friend of Hank’s and had known him since early in his career.  He arranged for him to come stay at the cabin on Lake Martin. Hank had just divorced his wife Audry a few months before that, and supposedly needed a little time to himself.  But-he didn’t show up alone.  He showed up in his blue 1952 Cadillac convertible with a pretty, blonde, pregnant woman sitting right beside him.  That’s the same blue Cadillac that he would meet his untimely death in just a few months later.

He stayed in Alexander City for about four months.  The time he spent here was valuable-because it was the source of inspiration for the hit song “Kaw-Liga.” 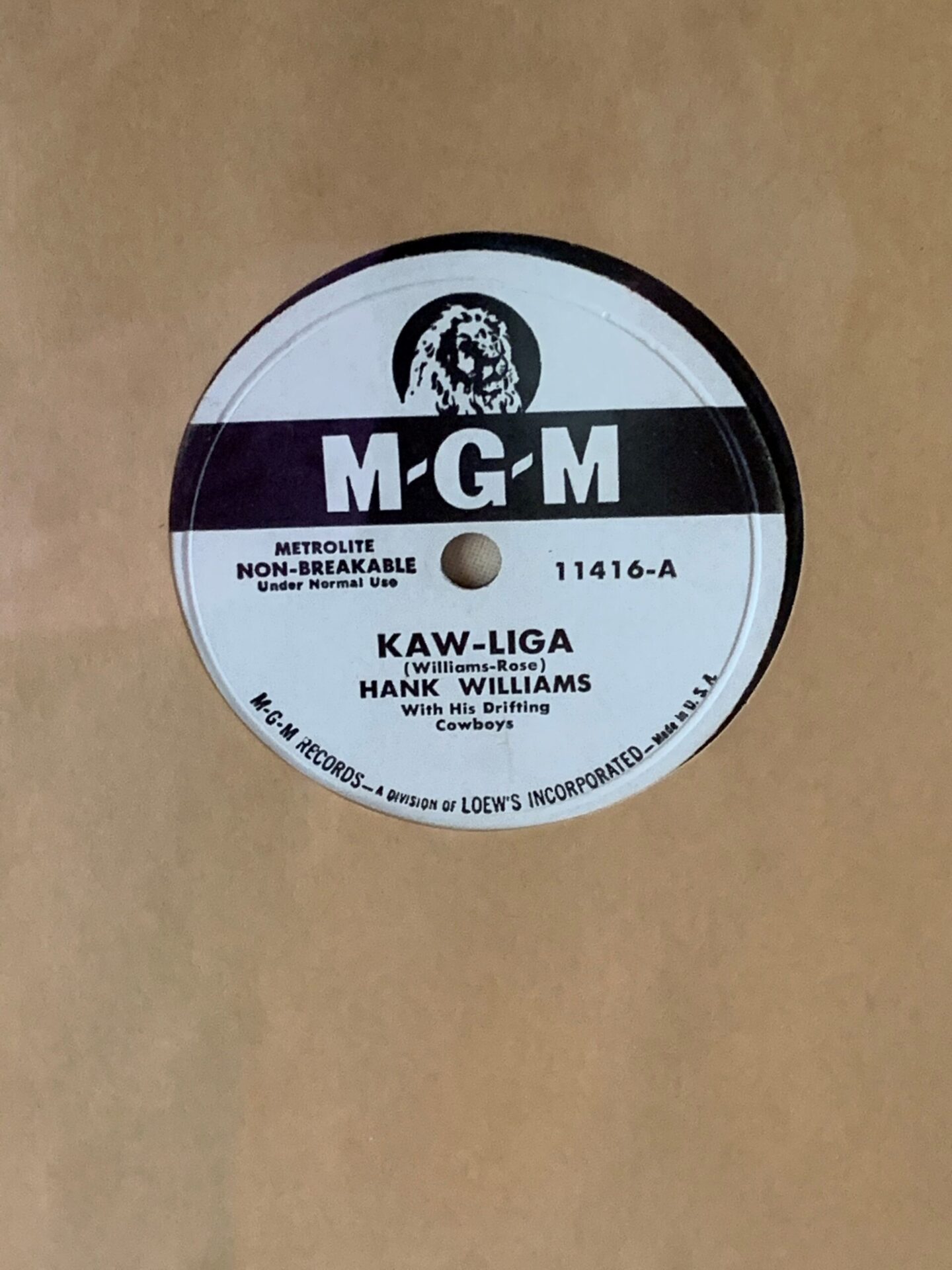 In the song, Hank talks about a wooden Indian named Kaw-Liga, and describes his heart as being made of knotty pine wood.  The cabin where he stayed had knotty pine paneling, so we are assuming that’s how that ended up in the song. 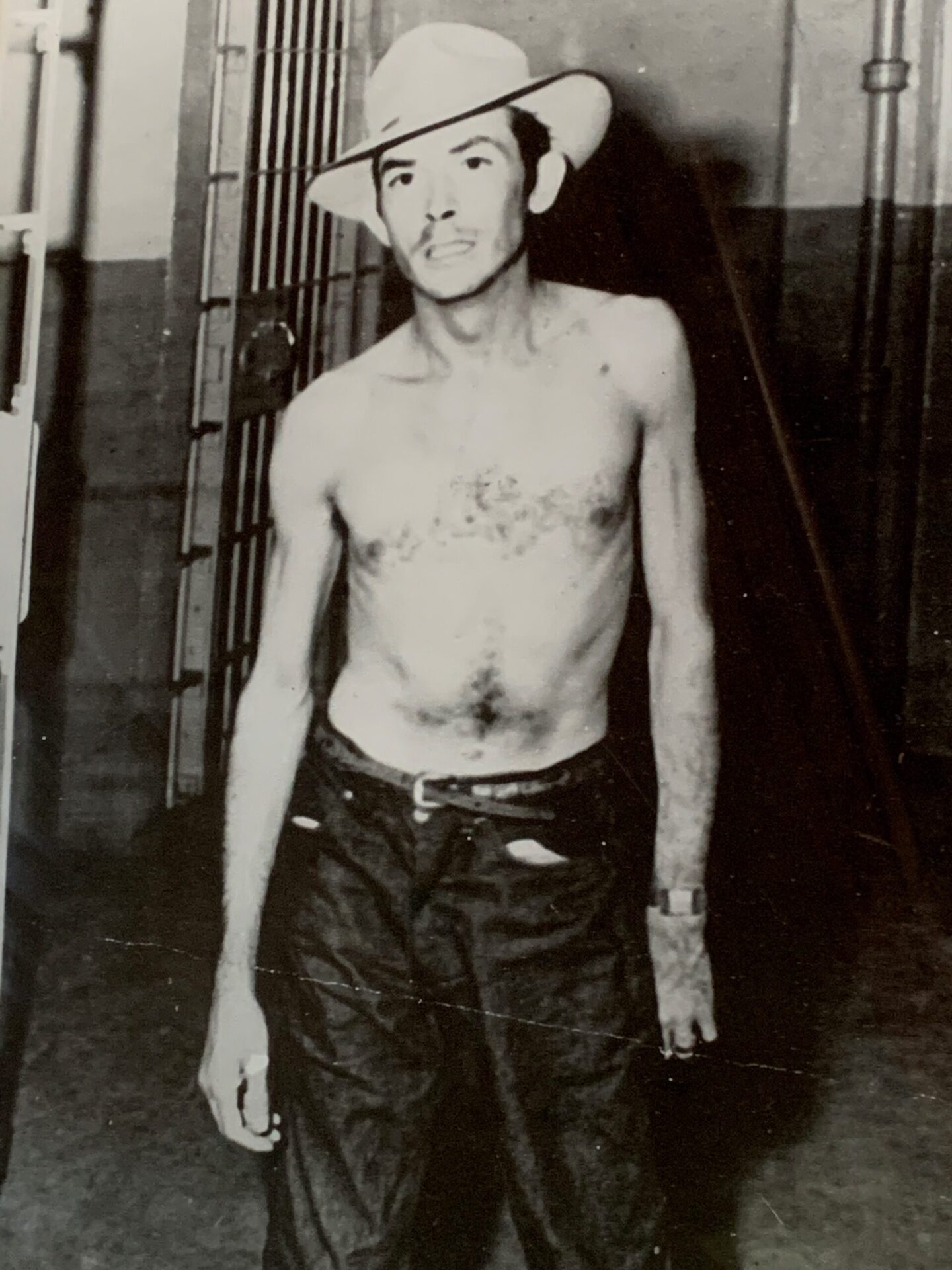 But-it wasn’t all work, work, work during his time here.  While Hank was making music magic happen during his time at Lake Martin, he was causing a little havoc too.  In August 1952, a month before he turned 29, he was arrested and thrown in the Alexander City Jail for public drunkenness and disorderly conduct.  The rumor is that he was bailed out and taken back to the cabin that night, and was left there without his car.  That apparently didn’t stop him though, because he hitchhiked right back into town to keep that crazy night going. 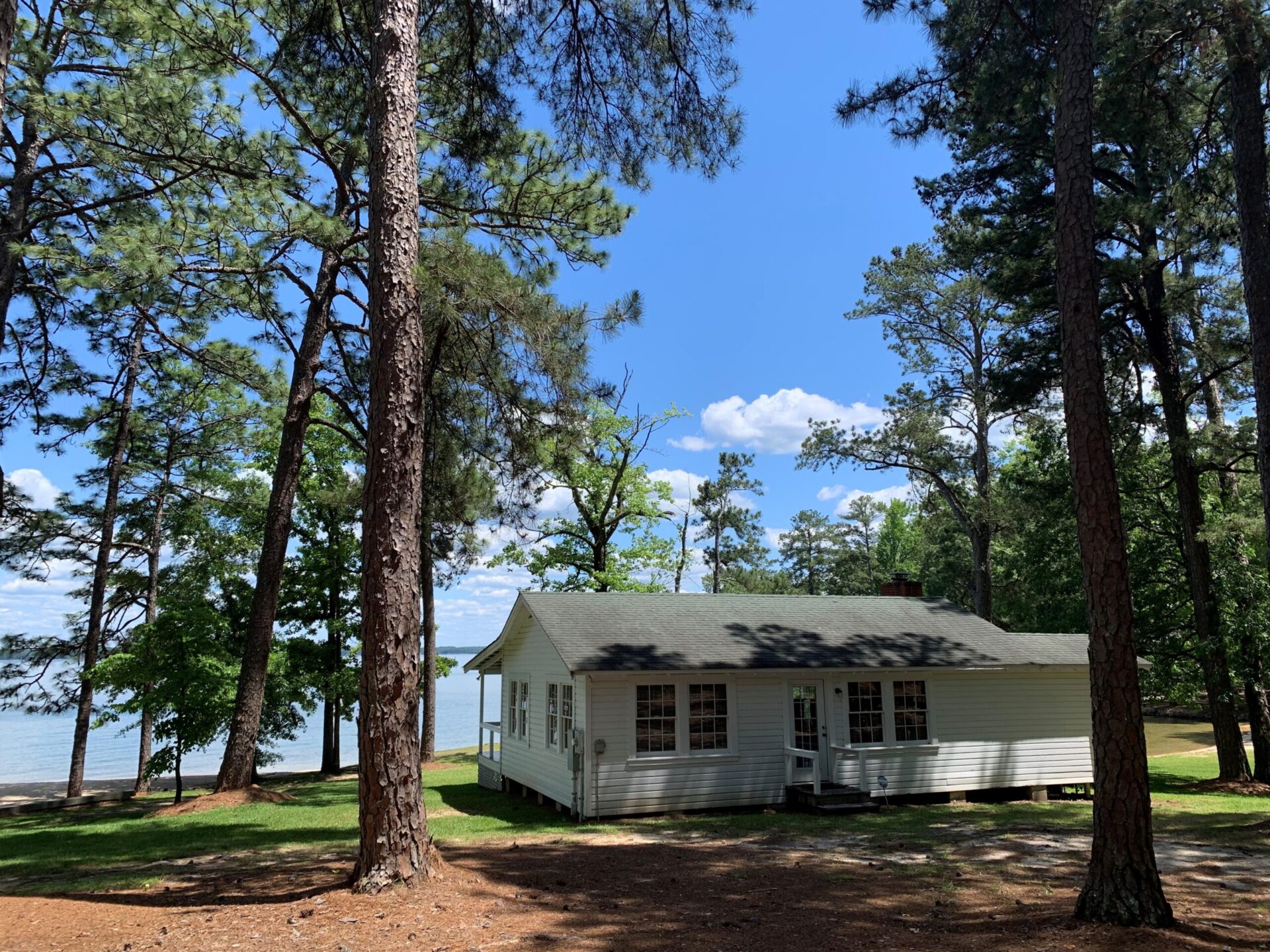 So now that you know the places to avoid when visiting Lake Martin (jail), let me tell you a little about the one place you must visit if you want to truly experience the Lake Martin that Hank experienced-the Hank Williams Cabin.  The cabin where he stayed during that time is still intact-and you can get a great view of it by boat from the water. While it is not available for tours, you can actually spend the night in it.  It is definitely one of the coolest places to stay on Lake Martin. As a bonus, 100% of the money made from renting the lakeside cabin goes to help fund Children’s Harbor, a 501(c)(3) non-profit that funds camps for children with disabilities.  So yes, you can stay where Hank himself stayed, and you can also do something good for the world at the same time.

When you first walk into the cabin, you will get chills-just knowing that the legend himself spent time there and that it had such a significant impact on one of the awesome musical treasures that he left us with. 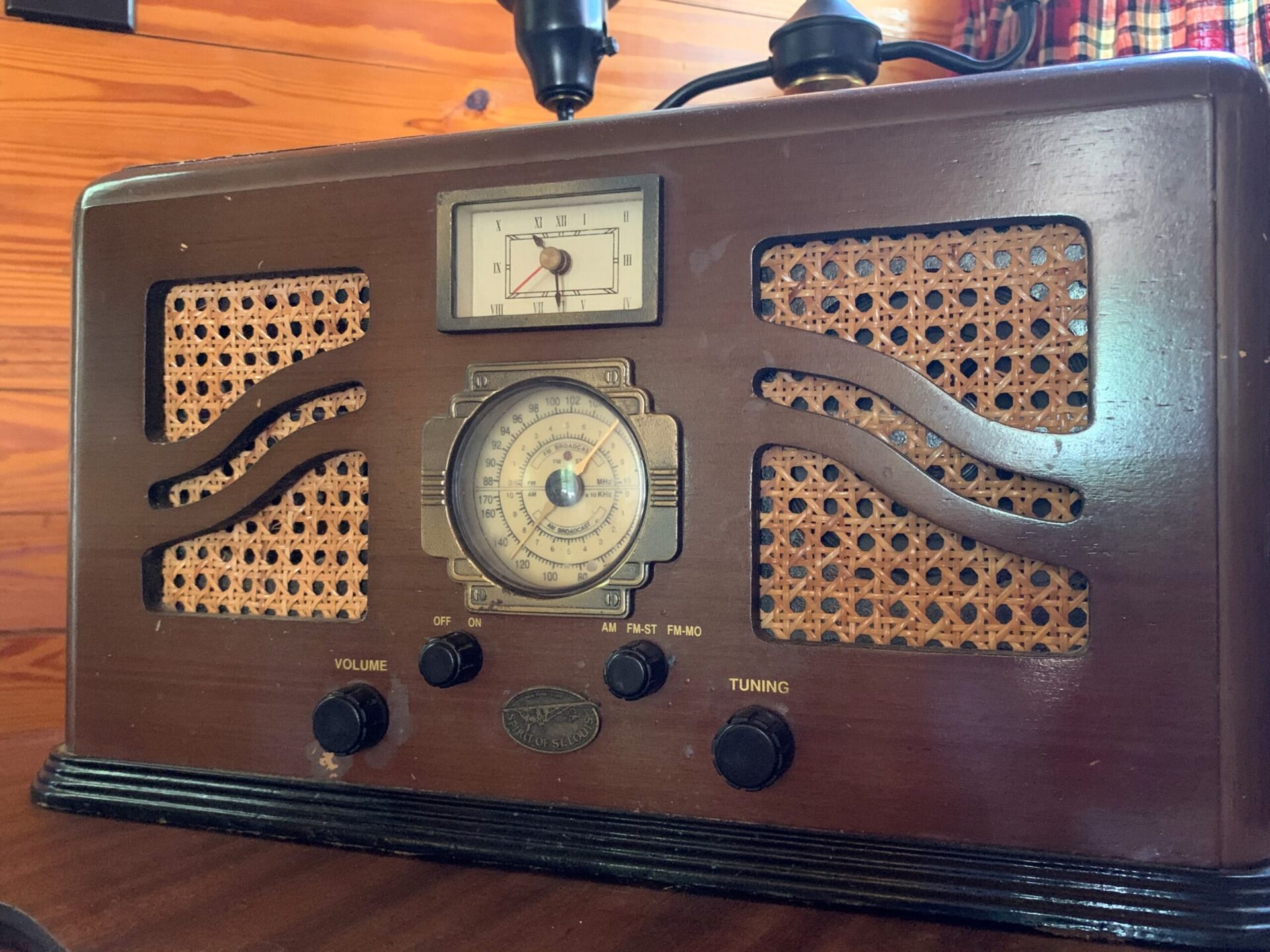 As you look around, you will see that no detail has been left out, as it has been restored to look just like it looked at that time. 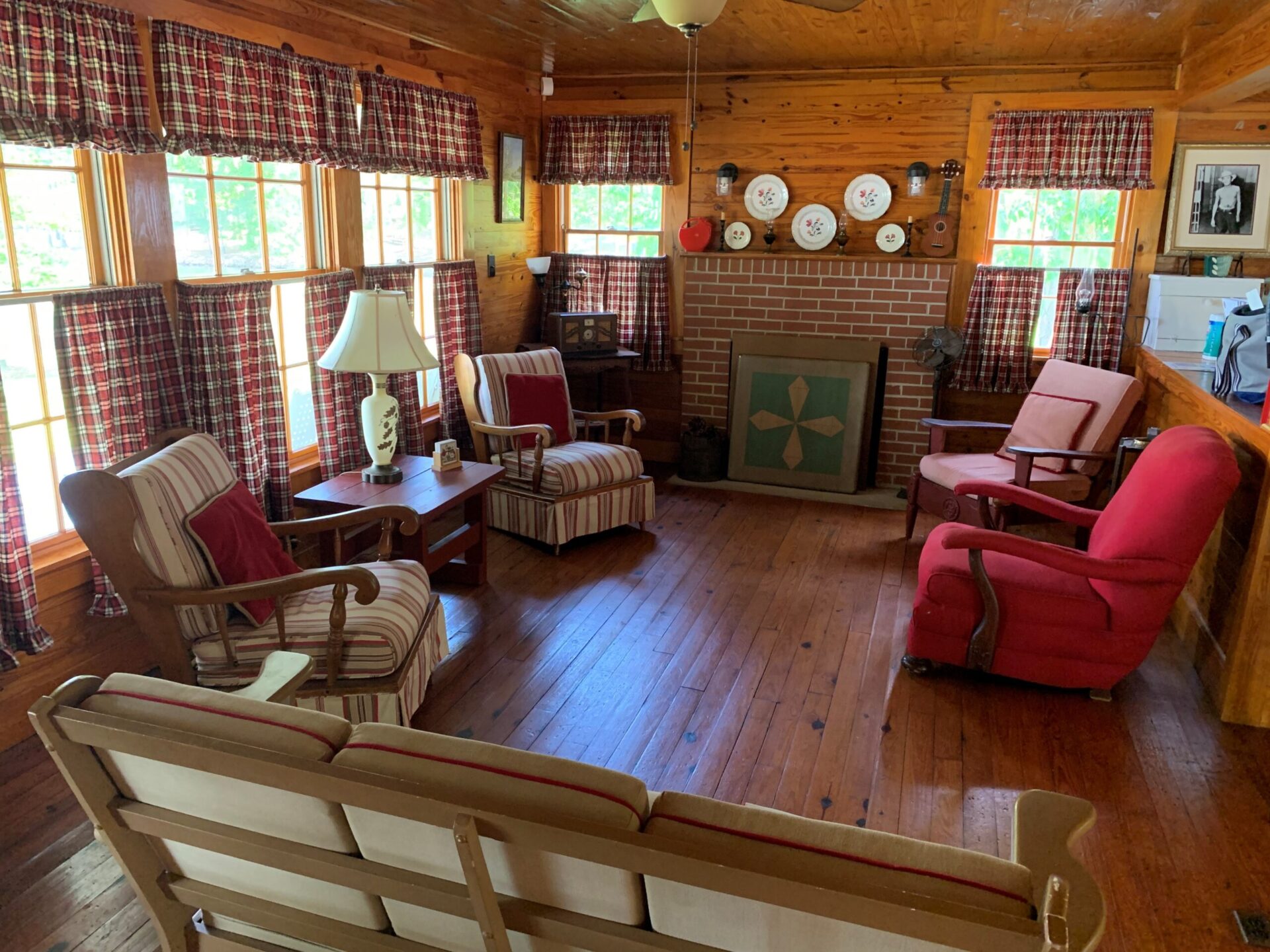 Any music fan will also appreciate the nice touches of the Hank Williams memorabilia that can be found in the cabin. 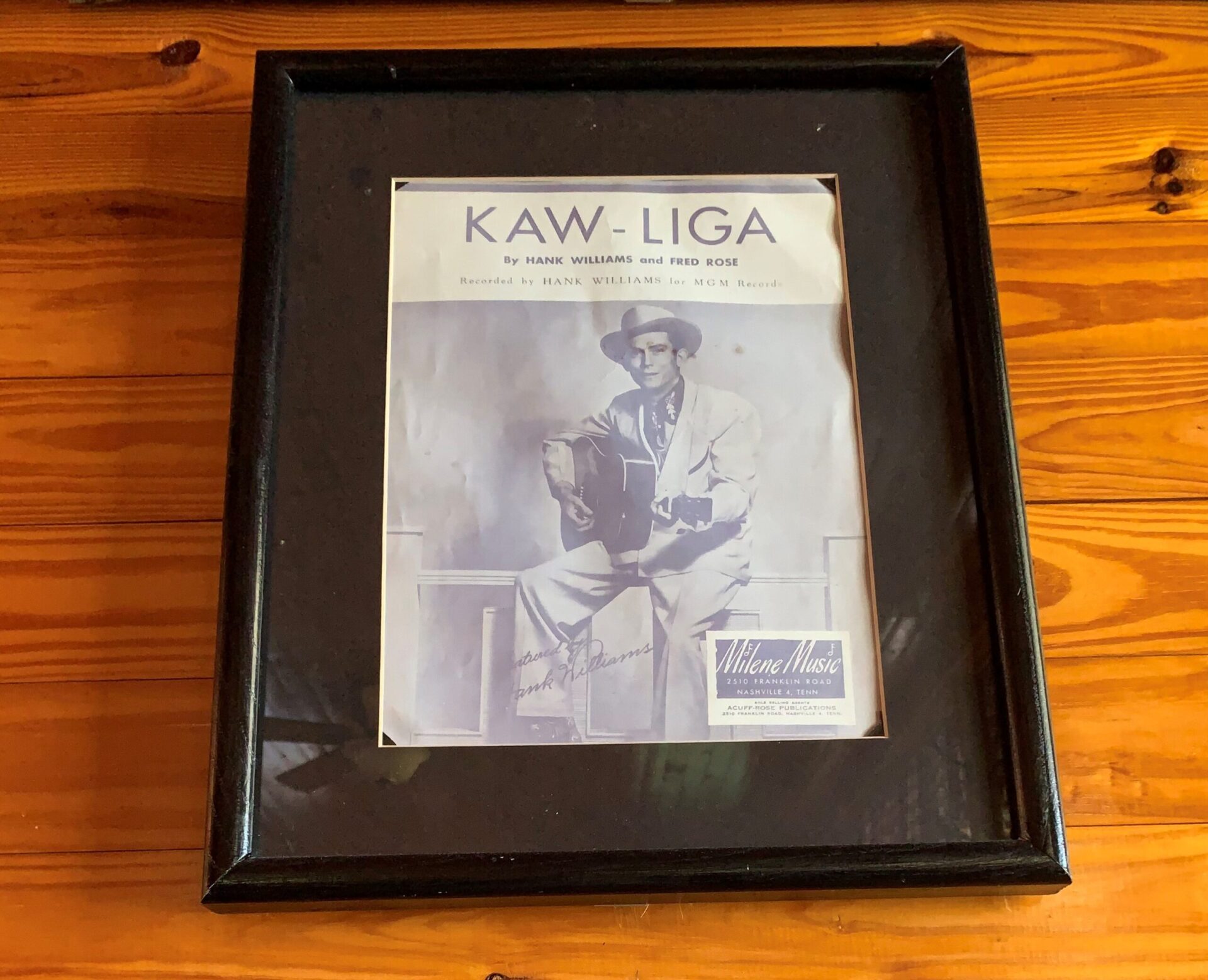 But don’t come here looking for the luxuries of today.  Hank wanted to get away from it all, and that’s what you will experience when you are here too.  When you are swinging on the glider on the back porch facing Lake Martin, you will feel the peacefulness that Hank must have felt, and you can just imagine the sounds of him there beside you strumming his guitar. You really can’t beat the view- and maybe it will bring you as much inspiration as it did Hank. 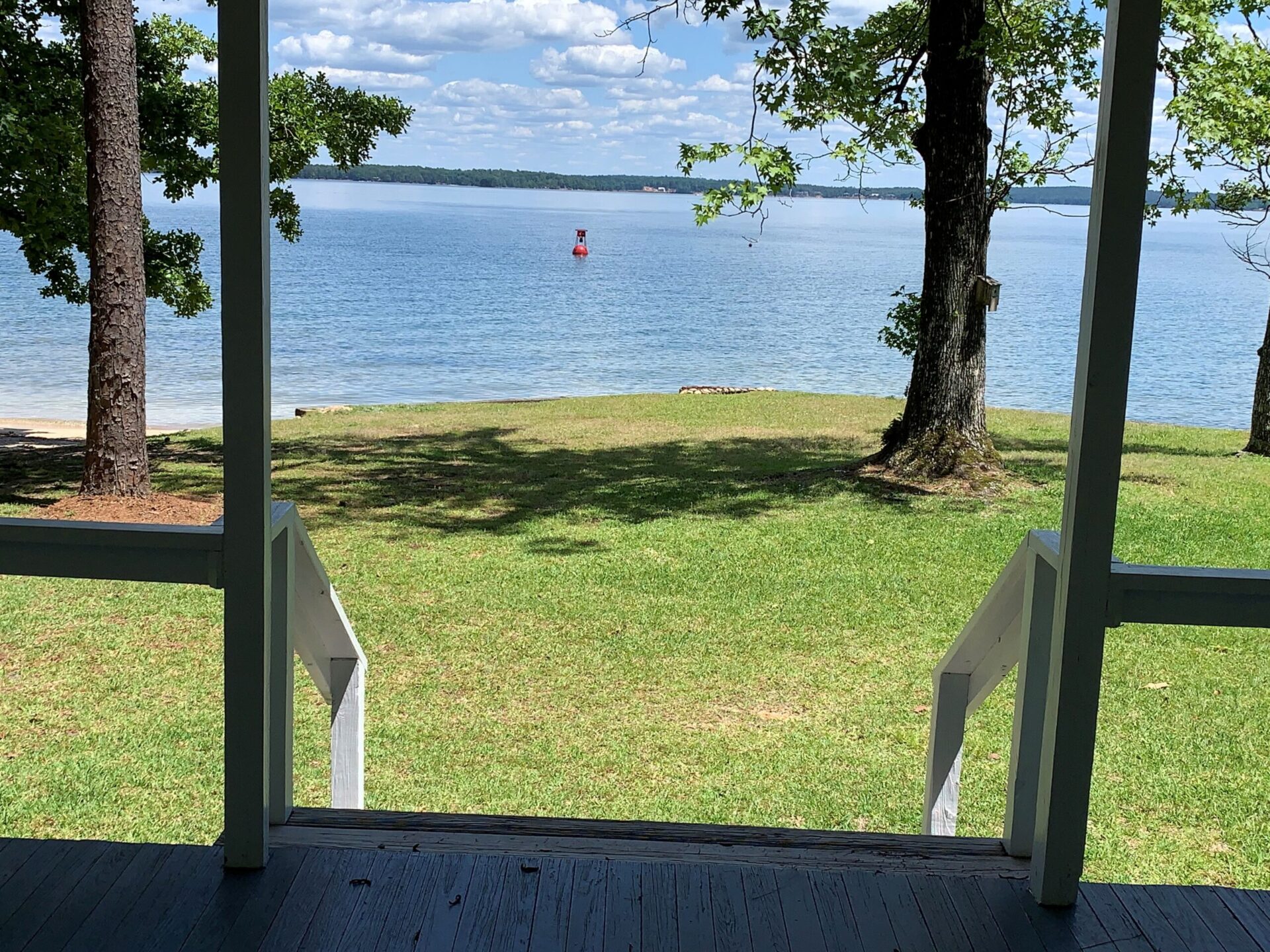 When you are in the area, you have to also check out Kowaliga Restaurant, which is just across the road from the cabin.  It is one of the must visit places to eat on Lake Martin, and you can go by car or by boat. Not only do they have some of most scrumptious catfish you have ever tasted, but they also have some really cool Hank memorabilia to check out too. And if you go, make sure you get a selfie with Kowaliga, the wooden Indian at the entrance. 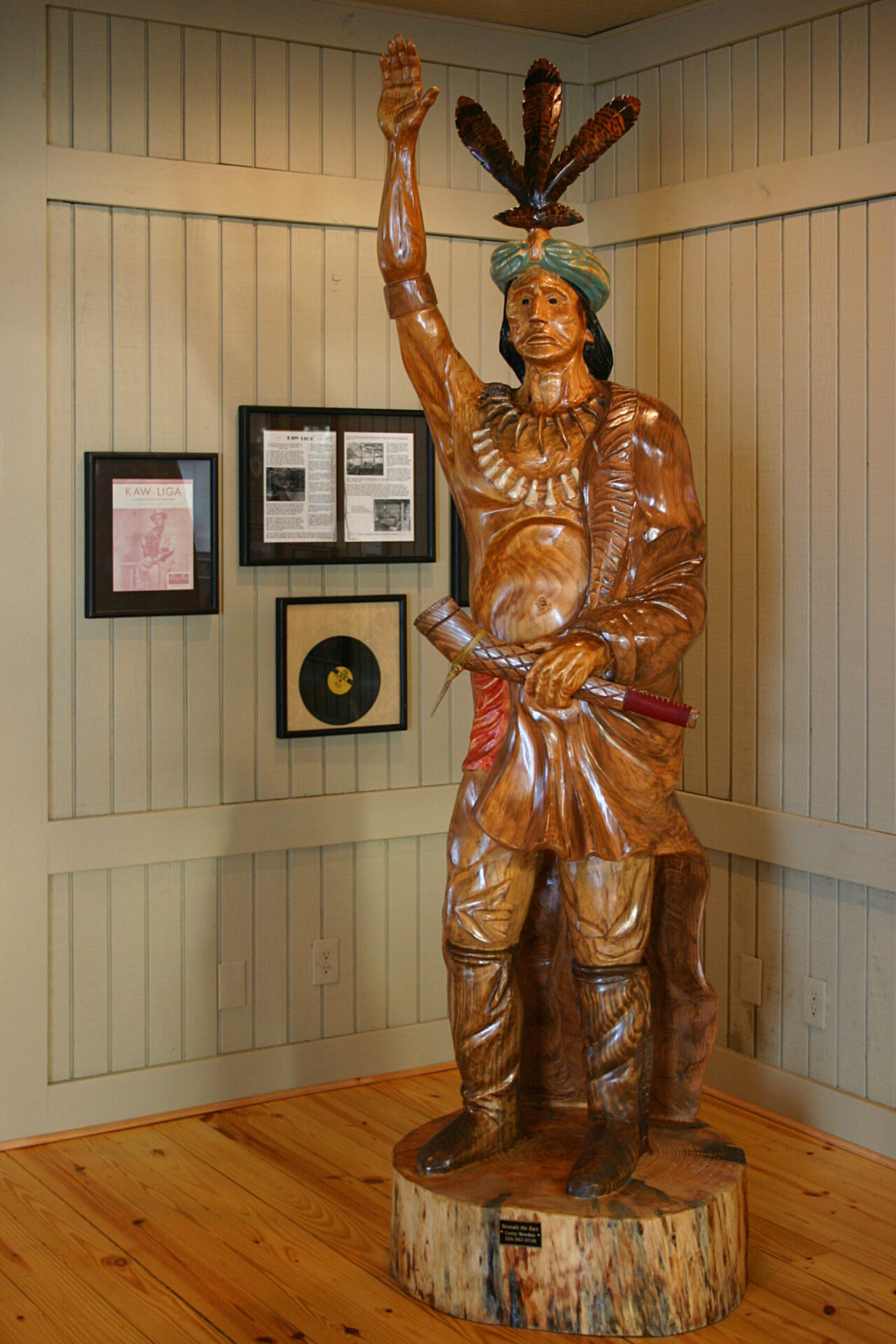 The original Kowaliga wooden Indian-the one made famous in the Hank Williams song-according to local businessman Fred Dobbs and Charlotte Hodnett-came from Horace Heil who was the Alexander City Pontiac dealer. 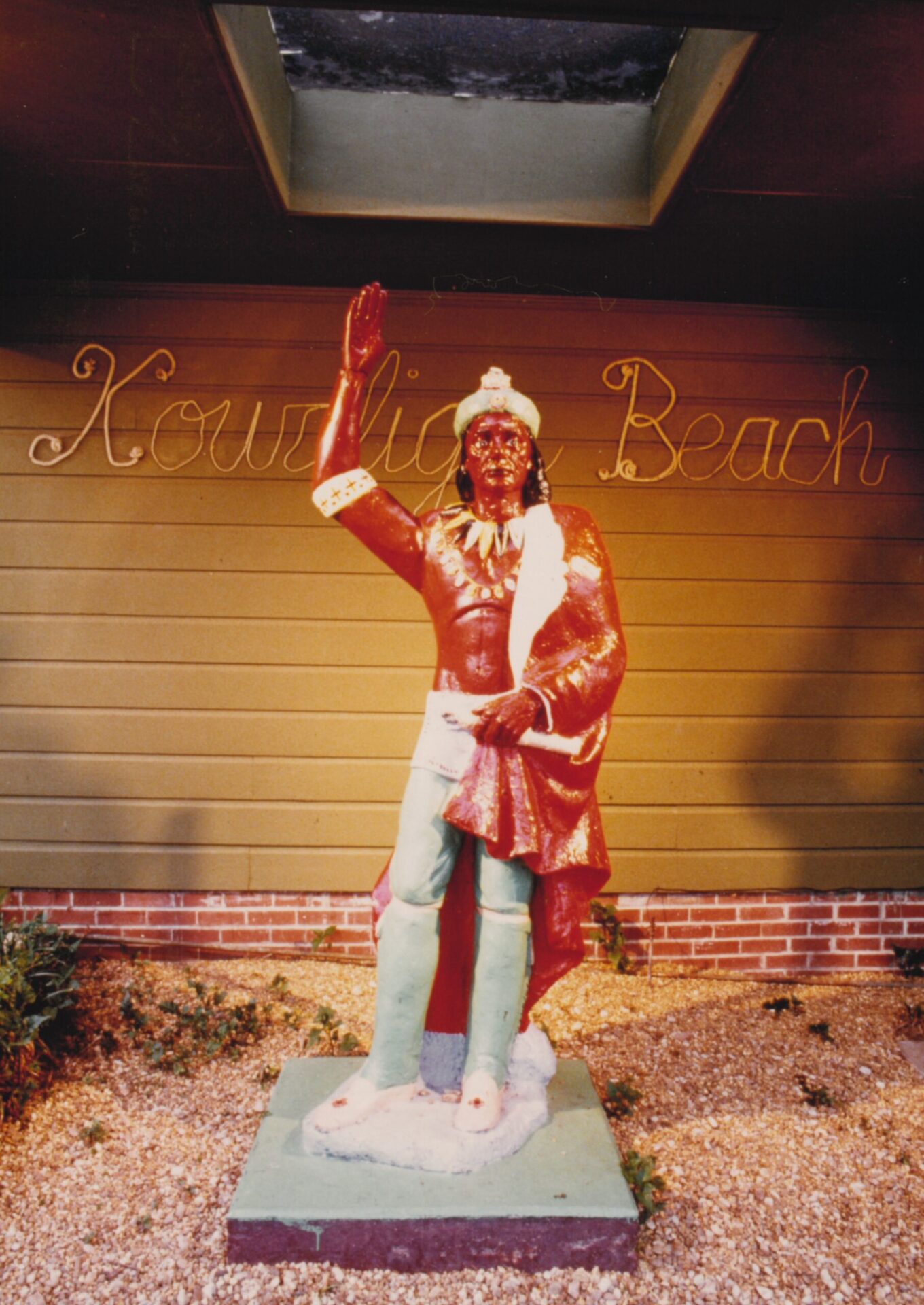 But that first Indian was kidnapped! Never to be seen again. His successor, who was found at a Sylacauga Pontiac dealership, also disappeared without a trace. Some forethought was given when the third Kowaliga was created, as he was made of rebar reinforced concrete. Although he managed to not be abducted, he suffered many assaults over the years, including fire and vandals. Although his war club did go missing for a short period of time, the fourth wooden Indian, now resting comfortably inside Kowaliga Restaurant, was created by Cory Worten, a wood carver, of Beneath The Bark Carvings.

The Hank Williams cabin on Lake Martin is something you must experience, but-there’s more.  There is actually a whole Hank Williams Trail that runs through Alabama-and this is a must do for any country music fan.  You can see everything from his boyhood home to the site of his grave-and see the places that meant so much to him in between.

A special thanks to Robert Gunn with Russell Lands for his contribution to this article.