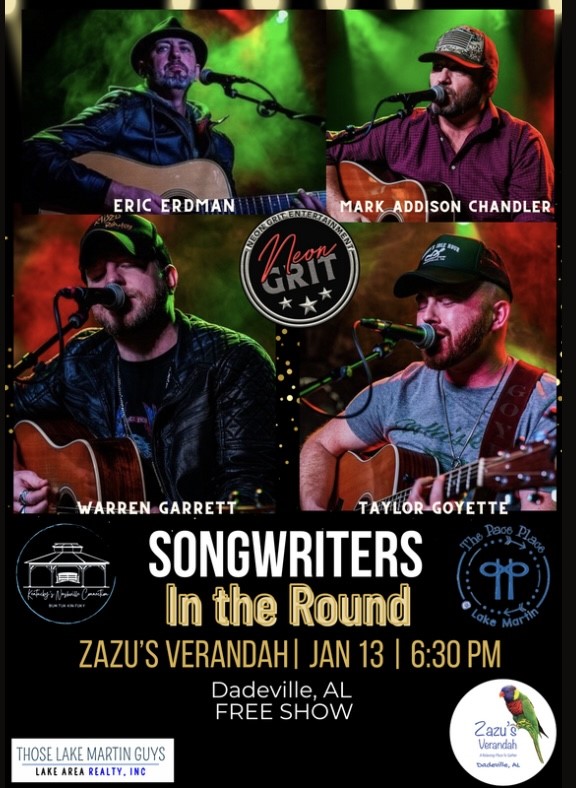 Songwriters in the Round…Presented to you by Neon Grit, Those Lake Martin Guys, The Pace Place and TheKentucky-Nashville Connection. Nashville touring singer songwriters Eric Erdman, Taylor Goyette, Warren Garrett and Mark Addison Chandlerwill be performing a songwriter round Friday January 13, 2023 in Dadeville, AL at Zazu’s Verandah in The Listening Room, giving you thestories behind the songs and a glimpse into how a song starts.

Free to the community but be certain to generously thank and tip themusicians!

Read on to get all the full scoop…

o Taylor Goyette, a Florida Native now residing in Nashville andcurrently signed to a publishing deal with Kobalt Music Services.Taylor is touring regionally and has a series of singles slated torelease over 2023. You can find Taylors music streaming everywhere.

o Mark Addison Chandler grew up in North Carolina, resides inNashville and is Co-Owner of Grindhouse, one of the most acclaimedsongwriter rounds (brands) in Nashville. Mark is writing with some ofNashville’s best songwriters and artists, both labeled andindependent. Mark had 29 (co-written) songs cut in 2022 and promisesto top that in the coming year. Mark is touring nationally and expectsto release more of his original music this year. You can find Mark onall streaming platforms and be sure to subscribe and follow Grindhouseon Youtube, Spotify and all social media platforms.

Don’t miss the opportunity to enjoy all these Nashville singersongwriters live at Zazu’s Verandah on Friday evening, Jan. 13th!Doors open at 6:15!