Dadeville Square-Music in the Air 2021 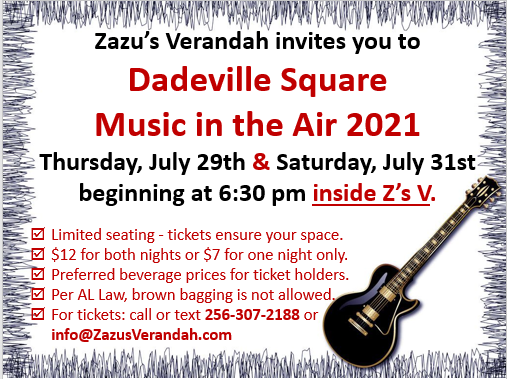 Get your tickets now…Daeville is in for a huge treat as we bring back a cast of legends inside Zazu’s Verandah Saturday, July 31.  Enjoy Mark Lyden, Brian Graber, Skip Courtney and Bruce Yandle along with a few more of their friends who will also be there to jam.

All these musicians were in successful eighty’s bands in Auburn and the south and remain respected throughout the music industry. Mark Lyden, a founding member of Nothing Personal (who had bands such as Widespread Panic & The Indigo Girls open for them and, Michael Stipe of REM reportedly went to every gig they played in Athens) has not lost his enthusiasm for writing and playing his own (amazing) songs and classic cover songs. Brian Graber is a Trumpet and Sax player based in New Orleans and was a member of a New Orleans group known as the  “Runnin Pardners” led by bassist George Porter Jr. of the Meters (who was recognized at the Grammy awards for lifetime achievement in 2018.)

Don’t miss this rare opportunity…live for one night on the beautiful Dadeville Square, Saturday, July 31st.